At this time last year, there were plenty of questions about Wisconsin’s defense. Understandably, some had their doubts.

Surely the Badgers would take a step back after losing defensive coordinator Dave Aranda to LSU. The departure of breakout All-American Joe Schobert would be felt, as would the graduation of indispensable safety Michael Caputo. And that schedule? Man, 2016 looked like it could be a rough one in Madison.

Somewhere between the diabolic blitzes drawn up by Justin Wilcox and the hurried throws that turned into Leo Musso interceptions, those preseason doubts became silly. The Badger defense put up staggering numbers in an 11-win season that was capped off by a New Year’s Six victory.

There are similar questions about the Wisconsin defense heading into this season. Another new defensive coordinator. More NFL-level outside linebackers gone. Another invaluable safety to replace. 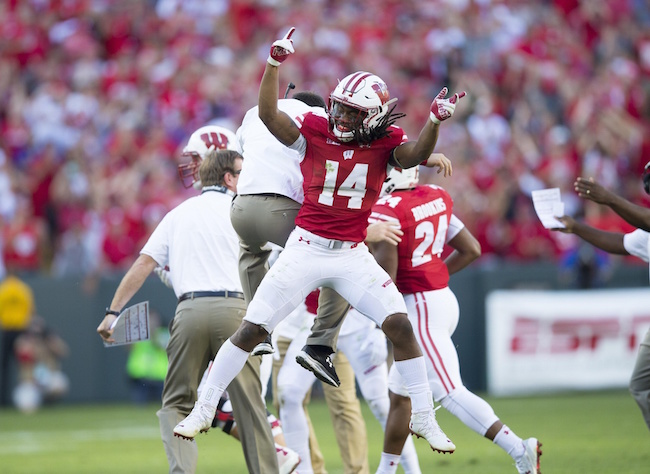 Don’t get the wrong idea.

Losing T.J. Watt, Vince Biegel, Sojourn Shelton and Musso was significant. Passing those guys off as “easily replaceable” would be wrong. Each probably could’ve made their own individual case for team MVP. Ultimately, that honor went to Musso.

And what Wilcox came in and did after the Badgers lost Aranda was nothing short of remarkable. Wilcox pushed all the right buttons and adapted to his personnel in nearly flawless fashion.

But the Badger defense was left in capable hands.

Every level of the defense returns at least two starters. That doesn’t include inside linebacker Chris Orr, who missed all of 2017 after suffering a season-ending knee injury in the opener vs. LSU. That also doesn’t include key midseason replacement starters like Ryan Connelly and Garret Dooley, who racked up a combined 99 tackles and 13.5 tackles for loss (and one sweet spin move for a touchdown).

Those two were key in the loss of Jack Cichy, who was having an All-American season before he went down with a pectoral injury that ended his 2016 campaign. Now, he’s healthy and ready to return to his All-American form.

Nose tackle Olive Sagapolu is also back at full strength after an injury-plagued 2016. He’ll solidify a defensive line that returns all three starters.

And in the secondary, hard-hitting D’Cota Dixon and top corner Derrick Tindal are both All-B1G candidates.

So yeah, it’s hard to find a B1G defense that returns more talent and experience. That’s a good sign for a unit that finished fourth in FBS in total scoring. New defensive coordinator Jim Leonhard isn’t exactly rebuilding his group.

But Is Leonhard Experienced Enough?

Leonhard’s rise in the coaching ranks was almost like that of a former NBA player. How many guys get a job as the defensive coordinator of a top-15 program after just ONE year of coaching? It’s unheard-of.

That was the direction Wisconsin went in after Wilcox’s surprising decision to become next head coach at Cal. The timing wasn’t ideal, and in a perfect world, the Badgers wouldn’t have had to look for their third defensive coordinator in three years.

But inexperienced or not, Leonhard got the job because of the reputation he had already built within the Wisconsin locker room. Leonhard’s group of defensive backs praised him, and with good reason. In Leonhard’s one and only season as the Badgers’ defensive backs coach, Wisconsin had more interceptions (22) than any Power Five program.

On top of that, he had Paul Chryst’s trust. Chryst admitted that he actually tried to convince Leonhard to cut his NFL career short so that he could join his staff at Pitt.

Leonhard spent 2015 — his lone year of not playing or coaching — watching film with Aranda and learning the college game. He learned how to see plays develop from a different angle, which was what helped him transition into his role in 2016.

Now, does that guarantee Leonhard will immediately thrive calling plays for an entire defense? No, but we know that he isn’t trying to re-invent the wheel. We also know that he has plenty of experienced players who have mastered the system. The fact that Leonhard was a three-time All-American at Wisconsin and a 10-year pro should only help him establish his presence.

Experience is important, but it isn’t everything. Leonhard has all the other tools needed to succeed in his new role.

New Stars in the Making

There are two Wisconsin defenders that might not start in the season opener, but it wouldn’t surprise me if they were stars by season’s end. Ball-carriers should we well aware of Garrett Rand and Andrew Van Ginkel whenever they step on the field.

And speaking of defensive end, watch what Van Ginkel did to these poor FCS offenses as a true freshman at South Dakota:

Van Ginkel will play outside linebacker at Wisconsin, but he’ll use the same edge-rushing skills that made him a menace at South Dakota and Iowa Western Community College.

He’ll still have to adjust to B1G speed, which isn’t always a given. Garret Dooley and Zack Baun will likely receive more snaps than Van Ginkel, but he seems like he’s built to blossom in the Badgers’ blitz-happy defense.

So, How Good Can They Be?

There’s obviously not a definitive answer to that. We can’t sit here today and assume the Badgers are a lock to finish among the top five nationally in all the major defensive categories. But at the same time, the aforementioned reasons explained why this year’s unit could be every bit as productive as last year’s.

For comparison’s sake, let’s look at how that 2016 defense stacked up against some of Wisconsin’s best in the modern era (last 50 years):

To rank among those historic defenses, the benchmarks (per game) would be around 100 rushing yards, 200 passing yards, two turnovers and 14 points allowed. Oh, and fuel a top-10 finish.

That 2006 Wisconsin squad benefitted from a favorable schedule, too. That was supposed to be a middle-of-the-pack team with a first-year head coach in Bret Bielema. Certainly his inexperience didn’t hold the Badgers back from finishing among the nation’s best.

The same should be true of their first-year coordinator. Like Bielema, Leonhard was also on Wisconsin’s staff prior to his promotion. He knows what works and what doesn’t. If Leonhard was dealing with new personnel across the board, his inexperience would be a bigger issue.

But he’s not. The 2017 group has all the experience and talent Leonhard needs to succeed. The question shouldn’t be “will Wisconsin take a step back with a first-year coordinator?”

Will this be Wisconsin’s best defense in school history?