Talented backs like Saquon Barkley nothing new for Wisconsin defense

Back in July, Wisconsin defenders Vince Biegel and Sojourn Shelton were asked about Leonard Fournette at B1G Media Days in Chicago.

Fournette was a preseason Heisman Trophy candidate and highly-touted NFL prospect. Wisconsin was tasked with containing him in the season opener without their defensive coordinator, Dave Aranda, who left for LSU.

Biegel and Shelton were asked who Fournette compared to among the backs they had seen at Wisconsin. Heisman Trophy winner Derrick Henry was named, as was Ezekiel Elliott. There was also 2014 Heisman Trophy candidate Melvin Gordon, who the Badger defense got to see every day.

To Wisconsin, Fournette wasn’t the mythological beast many hyped him up to be. He was just another really, really good back that the Badgers were tasked with bottling up. For the most part, they did.

With all due respect to Saquon Barkley, Wisconsin’s same approach applies to him. While Barkley is as talented as they come, Wisconsin won’t be in uncharted territory against him on Saturday in the B1G Championship.

If the Badgers treat him like they treated Fournette, it’ll be a frustrating night for Barkley. 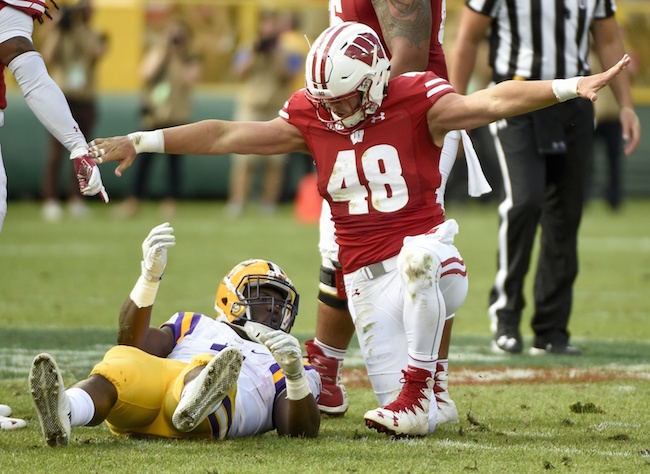 It’s worth noting that of the aforementioned all-everything tailbacks, Fournette was really the only won that Wisconsin contained in the last couple years.

Ezekiel Elliott racked up 220 yards and two touchdowns in that 59-0 rout of the Badgers in the 2014 B1G Championship. Henry kicked off his 2015 Heisman campaign with a 13-carry, 147-yard game against the Badgers, though they were dealing with injuries on that side of the ball.

And to be fair, Fournette still gained 138 yards and finished with six yards per carry in the season opener at Lambeau Field. But he didn’t get into the end zone and he couldn’t jumpstart LSU’s one dimensional offense.

In other words, Wisconsin isn’t going to be able to just load the box and make McSorley beat them. The teams that did do that to Penn State paid the price. On days in which Barkley finished with less than 3.5 yards per carry, look at McSorley’s numbers:

That’s the challenge for Wisconsin.

In a perfect world, the Badgers’ third-ranked run defense would eliminate Penn State’s biggest weapon, Barkley, and McSorley would be asked to make tough throws. But both have been so good that you can’t really sell out on either of them.

Even if Barkley is a little banged up, this could be the most-balanced offense Wisconsin has seen since the 2014 B1G Championship. I know, I know. The Badgers have played the likes of Alabama, LSU, Michigan and Ohio State in that stretch.

While Barkley could get to that level, he isn’t quite on par with an Elliott, a Fournette or a Henry. But did any of those teams have a quarterback that could stretch the field like McSorley? Wilton Speight and J.T. Barrett are playmakers in their own right, but they don’t sniff McSorley’s 16.2 yards per completion.

It’ll be interesting to see the way Wisconsin attacks this Penn State offense. Justin Wilcox, like his predecessor, thrives in obvious passing situations. That means preventing Barkley from picking up big chunks of yards on first down is huge for the Badgers if they want to play to their strengths and Penn State’s weaknesses.

So yeah, fire up the old, “something has to give” cliché if you must.

That’s what kind of battle we’re in for. But Barkley can be shut down and the Wisconsin defense can allow big games to big-time backs.

It’ll just take a playoff-worthy effort from both.