Jack Cichy paced back-and-forth inside the Qualcomm Stadium locker room. Normally a reserved guy, he found himself yelling at the TV. He couldn’t help it.

The Wisconsin linebacker was understandably anxious after being confined to the locker room for the first half of the Holiday Bowl. It was his punishment for the targeting ejection he received in the regular-season finale against Minnesota. He was convinced — even after watching it on replay 100 times — that he didn’t have any contact with the head. It was supposed to be a homecoming game of sorts for the emerging Cichy, who went to high school in a suburb of St. Paul. That was his first ejection or suspension of any kind. Even worse, he had to watch Wisconsin face the USC team that he and his dad — a former Notre Dame player — always rooted against.

Like a caged animal, Cichy couldn’t wait to be let loose.

“I definitely went a little crazy in there,” he admitted.

And he ran wild.

On two straight plays, Aranda sent Cichy right through the middle of USC’s A-gap. Nobody in their man blocking scheme accounted for Cichy’s perfectly timed blitzes and he got to USC quarterback Cody Kessler untouched.

Of course — on third-and-31 — Aranda doubled down again. Right through the A-gap, Cichy went. This time, USC running back Ronald Jones II sold out and disrupted a clear path for Cichy. But that only delayed the inevitable. Cichy sidestepped the last-ditch block and chased down a scrambling Kessler for the third straight time.

The sack-trick was complete. The sea of red at Qualcomm Stadium erupted as Cichy and his teammates celebrated the unprecedented accomplishment. Never mind the fact that Cichy forced Wisconsin’s game-sealing interception late in the fourth quarter. The three straight sacks were the talk of the night.

“I’ve never seen that before,” Wisconsin linebacker Vince Biegel said after the game.

Holiday Bowl Defensive MVP honors followed, as did a spot on virtually every publication’s All-Bowl team. Biegel came up with a nickname for the overnight celebrity.

It stuck. Some of his Wisconsin teammates still call him that. Sometimes when he’s walking down the street in Madison, Wisconsin students will drop the nickname.

“I probably hear it a little too much,” Cichy said. “A little more than I like. It was a great experience and I’m glad that it happened, but part of me wants to just move on…but it is what it is. I can’t really change my own nickname.”

People might not realize that “Three-Sack Jack” was a fitting nickname, but not just because of his historic feat. Before the Holiday Bowl, Cichy had three career sacks. One of them came in high school, and two of them came in his breakout sophomore season. It’s a challenge to find a single blitz on Cichy’s Hudl video from his days at Hill-Murray High School, where he was named All-Twin Cities honorable mention as a senior.

Sure, Cichy might’ve been a likely candidate to play college football as the son of a former Notre Dame player. But powerhouse programs like Notre Dame didn’t come calling. In fact, no FBS school offered Cichy a scholarship.

He could’ve played at North Dakota State, where some of his family lived, but he couldn’t see himself going to school in Fargo. Two weeks before signing day, Cichy took an official visit to Holy Cross in Worcester, Mass. When he came back, there wasn’t much doubt where he would sign on the dotted line.

A day after he returned, he got a call from newly hired Wisconsin defensive backs coach Bill Busch. Months earlier, the Badgers briefly talked to Cichy about a potential walk-on spot, but they hadn’t contacted him since Bret Bielema left Wisconsin to take the Arkansas job. Busch opened up the walk-on conversation again and got Cichy, a Somerset, Wisc. native, to take an official visit.

But there wasn’t any arm-pulling needed. Cichy was going to Wisconsin. 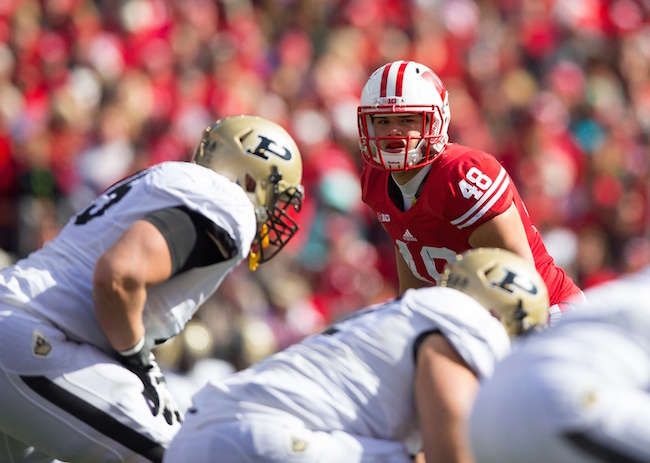 Cichy’s path to Madison was unconventional, as was his path once he got there. Instead of redshirting as a true freshman — like nearly every first-year player does — Cichy impressed enough to earn snaps. He played in four games without having much familiarity with the system. His ability to track down ball-carriers moved him into high favor with the coaching staff.

After his freshman year, Aranda even said that Cichy was the type of guy he wanted to be the face of his defense because “he’d run through a wall” for his coaches and teammates.

Still, Cichy was behind a bevy of experienced linebackers on the depth chart entering his second season. The Wisconsin staff didn’t want to burn another year of his eligibility by having him play a handful of snaps. After traveling with the team for the first month of the 2014 season, they decided that a redshirt was the best option.

RELATED: There were two major positives in Wisconsin’s spring game

Instead of taking that as a step back, Cichy felt that was a good omen for his future.

“That showed that they had confidence in me and that they wanted me to contribute,” Cichy said. “But they understood that I might have to wait a little bit. I was happy to hear that.”

Then of course, Gary Andersen caught everyone off guard when he bolted for Oregon State. Busch, who recruited Cichy to walk on, also left. Luckily for Cichy — and the Wisconsin defense — new coach Paul Chryst kept Aranda on board.

Cichy still treated the offseason like an open tryout. That spring, it all clicked. Cichy was confident that he showed the coaching staff enough to warrant significant playing time. They started by awarding him a scholarship. He was still a backup, but for the first time in his career, he had a clear-cut role. 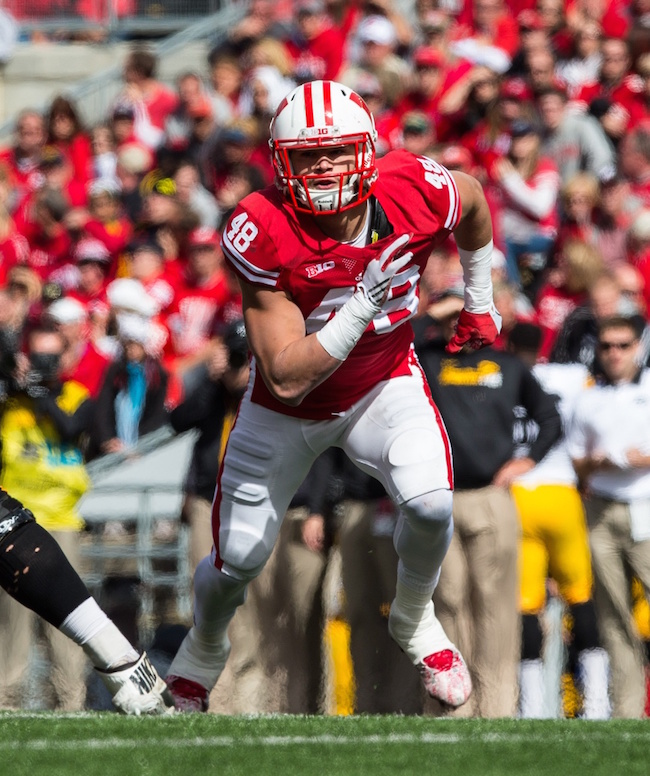 As a redshirt sophomore in 2015, Cichy played on special teams and served as the fill-in for Joe Schobert. If Schobert needed a three-play break, Cichy gave him a breather. In Aranda’s blitz-heavy system, Wisconsin rotated linebackers frequently.

Schobert, however, went on to have an All-American senior season. It wasn’t until inside linebacker Chris Orr went down that Cichy got his first career start.

Back at his high school position, he thrived.

Cichy started in the final four games of the regular season. Despite the fact that he only started in less than one-third of Wisconsin’s games, he finished fifth on the team in tackles and third in tackles for loss.

Cichy’s emergence culminated with the three-sack effort against USC. Aranda put Cichy in position to do more damage than he ever did in high school. Badger defenders were vocal about their desire for Aranda to stay on board beyond 2015. Most of the pieces from Aranda’s No. 1-ranked scoring defense were set to return.

Aranda was the only constant throughout Cichy’s time in Madison. Things are a bit different since he got his first call from Bielema’s staff.

“We’re pretty familiar with change,” Cichy said. “We like (new defensive coordinator Justin) Wilcox a lot. He brings a lot of the same things that Aranda did but there’s obviously some differences. We don’t feel like those differences are astronomical and we’re falling behind because of them.

“But it’s been a good transition. We’re all excited about having a new coordinator and seeing what we’re going to be able to do with him.” 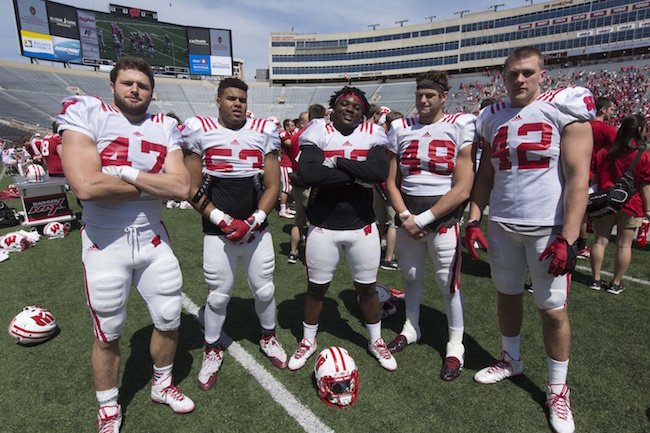 Regardless of who holds the coordinator position, Wisconsin has a track record of turning walk-ons into All-American defenders. Cichy grew up a big fan of former Badger All-American Jim Leonhard, who began his career as a walk-on. J.J. Watt also became an All-American after starting as a walk-on at Wisconsin. Cichy’s predecessor, Schobert, did the same in 2015.

As Cichy develops, some could predict that he’ll join that club. Right now, he isn’t focused on any of that. With Wisconsin returning every linebacker but Schobert, Cichy doesn’t even know if he’ll be starting in 2016.

But Cichy does know that the next time he takes the field, it’ll be memorable. Wisconsin will kick off 2016 against LSU at Lambeau Field. It’ll be the third straight year that the Badgers open in an NFL stadium against an SEC team.

This time will be different for Cichy, a lifelong Packer fan.

“It’s going to be cool just to see a sea of red out there with all of the green and yellow,” Cichy said. “But all of the red in the stands is going to be pretty special.”

It’ll be a much better view than the Qualcomm Stadium locker room.