Five things I learned from watching Wisconsin in person

It’s not always easy to recognize game speed. Watching plays develop is trickier when you’re limited to one camera view. And sometimes, it’s difficult to see just how good a team really is.

We knew how good Wisconsin was. I about laughed someone out of the room when they tweeted “the jury was still out on Wisconsin.” That’s code for “I haven’t watched Wisconsin yet so I haven’t adjusted my preseason narrative of them.” The Badgers were more battle-tested than anybody in the country.

Still, I wanted to see this group in person. I made the trip to Madison last Saturday and covered the B1G’s biggest game in a decade.

Here were a few things I learned from watching Wisconsin in person:

1. Jazz Peavy is even faster than he gets credit for

One of the things you look for when a team matches up with an Ohio State is who looks like they belong on the same field. Jazz Peavy not only belonged, he stood out. In the first half, the Buckeyes had no answer for Peavy’s jet sweeps. Part of that was because OSU had no one setting the edge. The other part of that was Peavy’s speed prevented the Buckeyes from doing so in time.

If you didn’t know any better, you might’ve thought it was Curtis Samuel turning the corner. Peavy finished with 146 yards from scrimmage and looked every bit like the five-star athletes he was on the field with.

2. Troy Fumagalli is an x-factor who needs more red-zone targets

The other passing game standout was clearly Fumagalli, who finished with seven catches for 84 yards. Believe it or not, It actually felt like he should’ve had more than that. A tight end with Fumagalli’s pass-catching abilities can be a matchup nightmare. Even when a play broke down, Fumagalli found a way to get open against the vaunted OSU secondary:

What I didn’t understand was why Fumagalli only had two red-zone targets all night. Wisconsin had five trips inside the OSU red zone and only got two touchdowns out of it. Even in the first half, it actually felt like the Badgers left points on the board.

If there was a knock on the Badgers’ game plan, it was that they didn’t expose their biggest offensive mismatch in key situations. Maybe if Fumagalli got more looks inside the 20, the Badgers would’ve turned some of those first-half field goals into touchdowns.

I often find that the most under-appreciated guy on the defense is the linebacker who goes sideline-to-sideline to make a tackle on a four-yard run. Without Vince Biegel, Cichy was that guy. For a former walk-on, Cichy flashed some next-level speed outside the hashes. It’s not easy to prevent OSU’s skill players from getting upfield, but there were a few instances in which I thought Cichy made game-saving tackles.

This is a play that Samuel can rip off 20 yards like it’s nothing. Watch how quickly Cichy sniffed it out:

He still might be known by some as “Three Sack Jack,” whether he likes it or not. But Cichy is a far better player than the guy who took advantage of three straight blitzes against USC in last year’s Holiday Bowl. There’s a reason that Cichy took home B1G Defensive Player of the Week honors in a losing effort. He’s going to give B1G offensive coordinators headaches for the next two years.

4. You’ll take the good with the bad with Alex Hornibrook

It’s easy to look at what Hornibrook did on the last play and blame him for not getting rid of the ball. He obviously should have. The Wisconsin line also should’ve held up better. But while Hornibrook still had his freshman mistakes — the Gareon Conley pick — I actually came away more impressed with him than I thought I would.

Against arguably the best secondary in the country, Hornibrook fit the ball through some tight windows. He recognized outside single coverage and made some impressive deep-ball throws. And the pocket awareness that plagued him against Michigan was far better against a talented OSU front. He didn’t unnecessarily roll out or make rushed throws.

If you watched Hornibrook on Saturday night, you saw a player growing into his role as a starter. Considering he started his first three games against Michigan State, Michigan and OSU — all of whom have defenders that will be drafted in the first round — Badger fans have to be encouraged by Hornibrook’s upside. Don’t let the last play cloud your opinion. 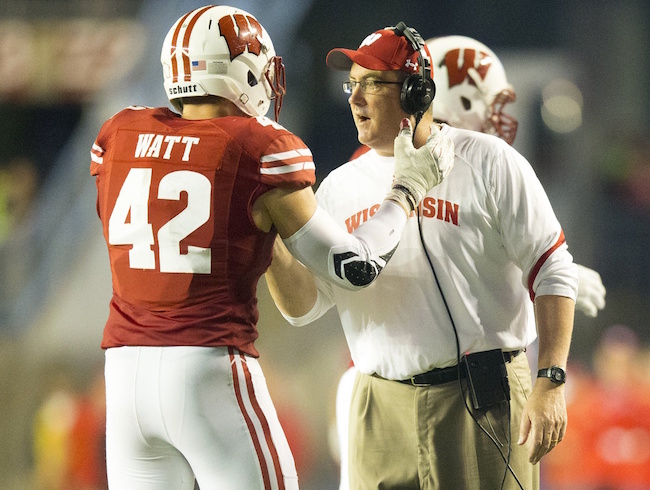 5. The Badgers can easily still get to Indianapolis

I know that Wisconsin is 1-2 in conference and the Badgers are no longer in control of their own destiny in the B1G West. The tough part about getting Michigan and OSU early was that Wisconsin fell two games behind Nebraska. If Nebraska somehow beats OSU and runs the table, Wisconsin would still miss out on a B1G West title.

But from what I saw, the Badgers looked like a team that can win the rest of its schedule. That didn’t look like a team with one four-star recruit (Corey Clement) on the field. The Badgers have almost become this year’s Michigan State. On a neutral site, they can compete with Michigan or OSU.

Iowa and Nebraska have been one-dimensional this year. Neither have got it going in the passing game in the way some might’ve expected them to. I can’t imagine how much better the Badgers will be when they get Vince Biegel and Natrell Jamerson back, especially against a one-dimensional offense. This defense is good enough to beat both of those teams without them.

Couple that with the expected maturation of Hornibrook and the building physical confidence of Clement, and the Badgers are still the favorite to win the B1G West. After seeing what Wisconsin up close on Saturday, I still expect the Badgers to make it to Indy.