The standings didn’t tell the story.

Iowa was 1.5 games ahead of Wisconsin in the B1G West coming off two straight wins. Wisconsin came into Saturday without a win in a month.

Still, that didn’t matter. Wisconsin was and is the better team. In losses to a pair of top-three teams, we knew that.

On Saturday, in their first win since the Michigan State game, the Badgers further proved that they’re the best team in the B1G West.

If Wisconsin had dropped the ball in Iowa City, it would’ve lost everything. The top-10 ranking, the B1G West title shot and the outside chance at a College Football Playoff berth would’ve been gone.

Instead, the Badgers showed us exactly what we already knew. The defense is dominant, the offense goes as Alex Hornibrook does and when push comes to shove, the Badgers are usually the ones shoving. 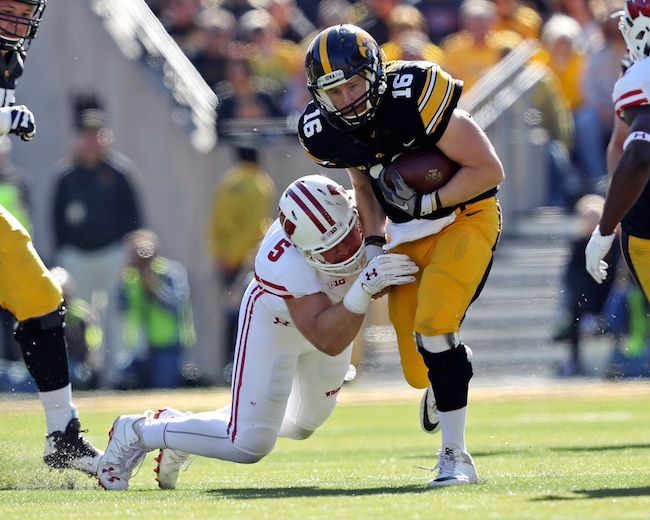 A 17-9 final score was would’ve come to expect from Iowa and Wisconsin in a given year. A low-scoring, defensive struggle on a chilly day was fitting for these teams. The final score would also indicate that this was a one-possession game.

Technically, it was. In actuality, it didn’t feel like it.

Maybe that was because in pretty much every category, the Badgers rolled. They won the time of possession battle by 15 minutes, they converted four times as many third downs as Iowa and they finished with a 423-236 total yards advantage.

So yes, it was an eight-point game. But the Badgers were clearly the better team.

That wasn’t a surprise. The surprise was the fact that the spread was only 4.5 points. There’s a reason that everyone was all over that in Vegas.

RELATED: There are reportedly a ton of bets on Wisconsin to cover vs. Iowa

Through eight weeks, we know what we’re going to get from Wisconsin. Corey Clement is going to run the ball a ton, Alex Hornibrook is going to make some impressive touch throws and the defense is going to do everything and more.

By the way, Wisconsin didn’t allow a touchdown on Saturday. How many offensive touchdowns have the Badgers allowed against non-top three teams? Three. In five games.

In fact, Wisconsin didn’t allow a touchdown against either of last year’s division winners. Both of those games were on the road, too. No, Iowa and Michigan State aren’t what they were last year. Neither is Wisconsin.

Last year, the Badgers couldn’t get enough offense in those defensive struggles. This year, they come up big when they need to. Clement and Hornibrook have both been huge for the Badgers on third down this year. Clement did most of the heavy lifting on Saturday.

Wisconsin even went with the unconventional quarterback change in the first half. Like an eighth-inning setup man, Bart Houston came in and delivered a key touchdown drive that got the Badgers going. Paul Chryst isn’t about to make any sort of quarterback change, but that was a savvy coaching move that not many would’ve made.

But it worked about as well as he could’ve asked. That seems to be a theme for Wisconsin this year.

Heading into the Nebraska showdown, the Badgers will be 5-2, still ranked in the top 10 and in prime position to win out and possibly make it to a B1G Championship.

A 2-2 B1G record doesn’t scream “division favorite.” If anything, that’s the mark of an inconsistent team. But with the exception of that Georgia State scare, the Badgers have been the same team every Saturday.

If they’re that team for five more Saturdays, they’ll have everything in front of them for the taking.