In one season, T.J. Watt went from a non-starter to an All-American.

The Wisconsin linebacker announced via Twitter that he’ll forgo his remaining eligibility at Wisconsin and enter the NFL draft: 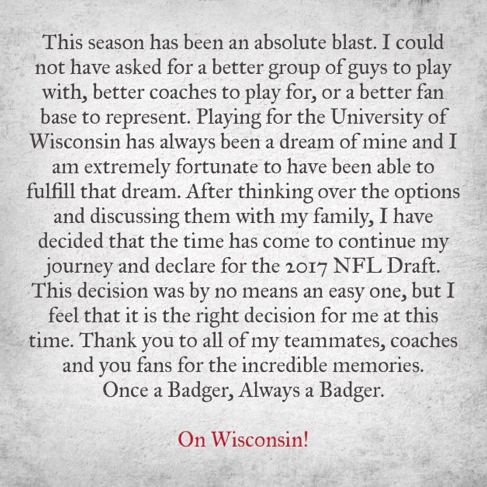 The first-team All-B1G selection was a menace for a Badger defense that finished as one of the nation’s best. Not only did Watt lead the Badgers in sacks (11.5), he also led the team in tackles for loss (15.5). He also finished third on the team with 63 tackles.

Watt was the steadying force on a Badger defense that suffered key season-ending injuries to the likes of Jack Cichy and Chris Orr, as well as a midseason injury to captain Vince Biegel.

With two brothers already in the NFL — you might’ve heard of J.J. and Derek Watt — T.J. will have a chance to become the third Watt drafted.

The Badgers will still return plenty of talent from a defense that ranked No. 4 in scoring.