Rob Wheelwright learning from brother's experience how to get to, stick in NFL

Wisconsin was taking on Minnesota, and for the first time in a long time, the battle for Paul Bunyan’s Axe had major postseason implications for both teams. It was essentially a B1G West title game. The winner got to advance to the B1G Championship and possibly the Rose Bowl.

In the Wheelwright household, there was extra motivation. Wheelwright’s older brother, Ernie, was a star wideout at Minnesota from 2004-07. As a kid, Wheelwright grew up rooting for Wisconsin just to be an annoying little brother. He always envisioned playing for Wisconsin one day and continuing that rivalry.

That was the situation Wheelwright found himself in as a sophomore in 2014. With five minutes left, the Badgers were inside the Minnesota red zone. An injury meant that Wheelwright — the guy with two career catches — was in as Wisconsin’s lone wideout on second down.

Wheelwright couldn’t have drawn it up any better. He didn’t even know what to do after his first touchdown catch so he just sprinted off the field and celebrated with the entire Wisconsin sideline.

Two and a half years later, Wheelwright’s first touchdown catch is still his favorite play in a Wisconsin uniform.

“Everything was so built into it,” Wheelwright told Saturday Tradition. “It made it so much better than really what it was.”

Wheelwright had many big-time plays after that Minnesota touchdown. The one-handed grab against USC in the Holiday Bowl certainly comes to mind, as does the touchdown against Illinois. He became Wisconsin’s big-bodied wideout and helped the program to two more double-digit win seasons (and two more wins against Minnesota).

But the Minnesota play, more than any other, represented Wheelwright’s journey to get to the doorstep of the NFL. 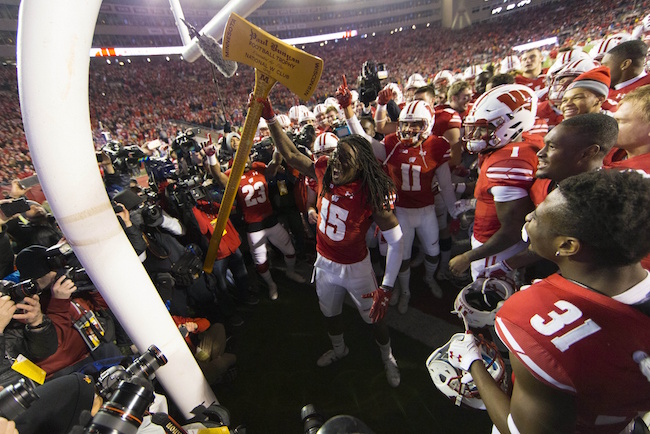 There’s a picture of that memorable touchdown catch that hangs in Rob’s room. Ernie lives in Atlanta now, but Rob makes sure his older brother sees that picture whenever he comes up to visit. Ernie actually has his own picture of that play on his phone.

When Rob scored that game-sealing touchdown, Ernie was back in Atlanta cheering on his Gophers. He had hopes of watching Minnesota reach its first B1G Championship and end its decade-long losing streak against the team he despised most. Instead, he had the ultimate conflict of emotions.

“It was the most joyful, upsetting moment,” Ernie told Saturday Tradition. “But I always said that if I had to lose, I wouldn’t mind losing to my little brother.”

That wasn’t always the case.

Rob and Ernie were the middle children of the Wheelwright household. There were four Wheelwright boys, all of whom were six feet tall and above, and all of whom played college sports (their grandpa also played in the NFL). But with a 23-year age difference between the youngest and oldest Wheelwright brothers, they weren’t like the Gronkowski family.

“Yeah, he can’t standing losing. He hates losing,” Ernie said. “That’s a great thing. With me, I would always think, ‘I lost, but I played pretty well.’ With him, it doesn’t matter if it’s one-on-one hoops. He doesn’t want to lose. He’s a real competitor.”

When Rob was in elementary school, Ernie starred on the gridiron at Walnut Ridge High School (Ohio) in Columbus. Fourteen miles northwest of Walnut Ridge was Ohio State. Yes, The Ohio State University. So surely the Buckeyes didn’t let a 6-5, playmaking wide receiver get out of Columbus, right?

It was more complicated than that. Ernie said previous Ohio State coach John Cooper recruited him “heavily,” but when Jim Tressel took over in 2001, his recruitment slowed down. Tressel wanted Ernie to attend prep school for a year before coming to Ohio State. Minnesota made him a better offer.

There was another important factor that went into that decision. In the Wheelwright’s part of town, the goal was to get out of Columbus.

“If I would’ve stayed in Columbus, Ohio, I think I would’ve been doing a lot of things that my friends were doing that wasn’t necessarily positive even though I was doing positive things,” Ernie said. “I think Rob took to that.”

Rob’s Ohio State recruitment had a similar feel. Despite being the No. 4 receiver recruit in Ohio — and a first-team all-state selection — the Buckeyes didn’t offer him.

But even if they did, Wheelwright still had a greater childhood connection to Wisconsin than Ohio State. None of his family members or close friends went to Ohio State, and even though he liked watching Troy Smith and Ted Ginn Jr. as a kid, he wasn’t Buckeye crazy. Because Ernie was at Minnesota, Rob always told his parents he was going to Wisconsin.

Rob also saw Ernie benefit from leaving home and getting to live on a college campus.

“I just felt like the route that I could’ve possibly gone down, it wouldn’t have been good,” Rob said. “Being in that environment around the same crowd I’ve been around since elementary school, I feel like getting out was best for me.” 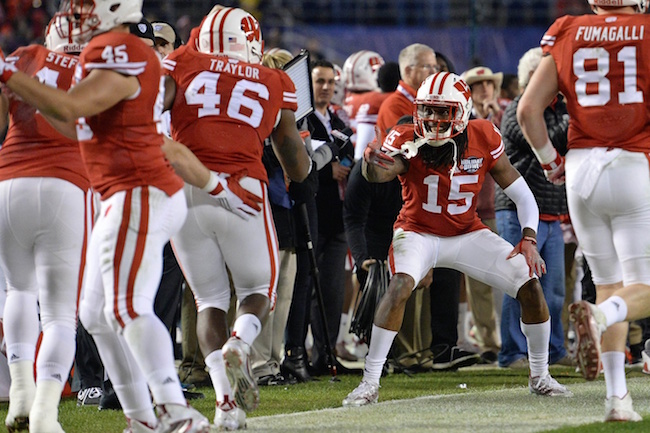 In their primes, the on-the-field similarities between Rob and Ernie were obvious. Both were big, physical receivers who had the size advantage on virtually any defensive back they matched up against.

Their college careers followed different paths. Ernie was a four-year starter who left Minnesota as the program’s third all-time leading receiver. Rob didn’t start until he was an upperclassman and a broken leg sidelined him for four games during his breakout junior season.

“Rob’s a better receiver than I ever was,” Ernie said. “I was just an athlete. He has all the intangibles to be way better than I was.”

Ernie said that he didn’t learn how to play football until he got to the NFL. After he went undrafted in 2008, he signed as a free agent with the Baltimore Ravens. There, Ernie spent three seasons watching guys like Ray Lewis and Ed Reed.

RELATED: The top NFL careers from B1G players that didn’t get combine invites

Admittedly, Ernie peaked when he got to the NFL. After three years in Baltimore, he spent one season in the Canadian Football League before calling it a career. Looking back on it now, athleticism and college production weren’t enough for Ernie to stick around at the next level.

Four years in professional football turned Ernie into an even more valuable mentor at Rob’s disposal. Rob went through the same pre-draft process as Ernie, neither of which included a combine invite. The typical “work hard, don’t waste the opportunity” advice wasn’t hard to instill in Rob. Even as a kid, Rob’s favorite mantra was “no days off.”

The mental advice from Ernie was what left a lasting impression.

“(Ernie) said, ‘Keep it simple. ‘This is a game you’ve been playing since you were a young kid. You watched me play it, your grandfather played it. It’s very simple,'” Rob said. “He said, ‘The more you can simplify the game and make it as fun as it was when you were a kid, the easier it’ll become.'” 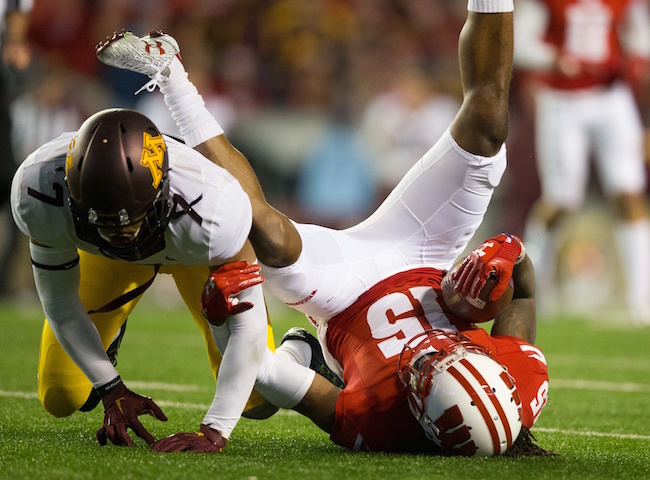 When Ernie was playing in the CFL and Rob was still in high school in 2013, the two brothers decided to race. With Rob physically developed and on the brink of B1G college football, it was finally a fair fight.

That was the last time the Wheelwright brothers raced.

Instead of competing against Ernie during the pre-draft process, Rob competed against his brother’s numbers. His goal was simple — destroy every one of Ernie’s pro day marks. With the exception of the 40-yard dash, Rob did just that. Even the 40 time was debatable because Rob’s 4.51 was laser-timed and Ernie’s 4.47 was hand-timed.

Rob’s successful pro day was a result of extensive training. He spent some time down by Ernie in Atlanta, he went back home to Columbus for a couple weeks and he trained in Madison the majority of the last three months.

RELATED: Don’t overlook Wisconsin as a national power in 2017

Unlike many draft prospects, Wheelwright is still going to school. After all, he has a degree to get.

Rob will fall back on his Wisconsin education when his playing days are over. Whether he gets drafted or not, that won’t be the end of the road. Rob watched fellow former Badger receiver Alex Erickson, a former walk-on, become the NFL’s kickoff return yardage leader as an undrafted rookie in 2016.

“That’s the type of guys we have at Wisconsin. All we need is the opportunity to showcase our talents,” Rob said. “We might not be the flashiest, we might not have — from a paper standpoint — the best stats. But we work hard. When we get the opportunity, we take advantage of it.”

Rob took advantage of his opportunity against Minnesota two and a half years ago. Before that, he was a typical underclassman that dwelled too much on dropped balls in practice and couldn’t crack the rotation. The Minnesota touchdown was when Ernie saw his brother’s confidence soar.

It’s still with Rob as he begins his professional career.

“(Rob) wants to be great,” Ernie said. “He wants to show the world that ‘I have the talent to play 10 years, 12 years in this league and hopefully make it to Canton.’”