How James White's roots prepared him for Super Bowl glory

It had been more than seven years since Smith coached White at St. Thomas Aquinas High School (Fla.). They stayed in touch after White went off to Wisconsin, and they maintained that bond when White was drafted by the New England Patriots.

Exchanging messages with a former player before an NFL game wasn’t anything new for Smith. This time, however, his words of encouragement came before the Super Bowl.

“I told (White), ‘Enjoy the moment. We’re really proud of you and I love you,’” Smith said.

Within the hour, Smith got a text back from White.

Seven hours later, White capped off the biggest comeback in Super Bowl history with a walk-off touchdown in overtime. Within hours, White went from being the Patriots’ third backfield option to a Super Bowl hero. He set Super Bowl records for points (20) and catches (14), while tying the mark for touchdowns (3). Many — even Tom Brady — felt White deserved Super Bowl MVP honors.

The next day, every major news outlet in America wanted a piece of White — he did appearances on ABC, CBS, CNN, NBC and more. White’s Monday after the Super Bowl also included a trip to Disney World, where a parade was held in his honor.

Smith caught the parade on TV. That prompted another text.

“I said, ‘Hey James,” Smith said, “you’ve got a better smile than the frickin’ Disney characters.”

It’s White’s smile that Smith remembers most about his days at St. Thomas Aquinas. Whether it was in the hallway, in his office or at practice, White always had a smile on his face.

“It was the same smile he had on Sunday night,” Smith told Saturday Tradition.

White had a reason to have a different attitude throughout his career.

Despite the fact that he scored 22 touchdowns as a junior at St. Thomas Aquinas, he shared a backfield with future Cincinnati Bengals running back Giovani Bernard as a senior (Jake Rudock was their quarterback). Despite the fact that he was the B1G Freshman of the Year at Wisconsin in 2010, White shared a backfield with either John Clay, Montee Ball or Melvin Gordon throughout his time in Madison.

Since he started high school, White has never been the featured back. Did that ever bother him?

White did, however, have one significant stretch when he got to be the guy. Hamstring injuries limited Bernard to nine quarters when he and White were high school seniors. That meant that White had to do it all. He got the majority of the carries, he caught passes out of the backfield, and even threw the ball.

Around the time the Miami Dolphins rolled out the “Wildcat” offense, Smith tried his own version of that with White. They called it “Wild White.” White would take the direct snap and he’d run, throw or catch the ball on a throw-back play.

His versatility made him an easy guy to plug in wherever he was needed. Often times, that was catching passes out of the backfield.

“We did just what the (Patriots) would do with him. We’d just dump him out of the backfield, and he would sit and wait,” Smith said of White. “It’d be open all the time, just like you saw Sunday night.”

In the middle White’s senior season, St. Thomas Aquinas put its No. 1 national ranking on the line against No. 2 Byrnes. White’s counterpart for the ESPN showdown was future All-American Marcus Lattimore.

On just seven carries, White was still St. Thomas Aquinas’ leading rusher. And just he did on Sunday night, he scored the touchdown that put the game away.

White had success everywhere, but there were always questions about how his skill-set would translate at the next level.

None of the big Florida schools wanted White out of high school. Perhaps it was because he didn’t fit the prototypical 220-pound mold for a blue-chip running back.

White had plenty of doubters before the NFL draft, too. Some knocked him for his 4.57-second 40-yard dash at the NFL Scouting Combine, while others questioned his small hands and short arms.

And also, why couldn’t White ever earn a starting job?

RELATED: Ranking the B1G’s best running back duos of the last decade

There should’ve been an easy to answer that question. In high school, he played for a national championship team alongside a future NFL starting tailback. In college, he played with one guy who set the NCAA career touchdowns record, another who became a Heisman Trophy finalist and one other tailback who earned B1G Offensive Player of the Year honors.

The fact that White still racked up more than 4,000 rushing yards and 45 rushing touchdowns at Wisconsin — and became a proven pass-catcher — was an improbable feat in itself.

Though he wasn’t high on everyone’s board, New England saw a fit. After Danny Woodhead left as a free agent, the Patriots were in need of another pass-catching back, and they took White in the fourth round of the 2014 NFL draft.

As usual, White wasn’t expected to be the guy as a rookie. A crowded backfield saw five Patriots backs earn at least 30 touches, and White wasn’t one of them. He was inactive for all but three games, including the Patriots’ Super Bowl XLIX victory.

RELATED: Jim Harbaugh was right: Tom Brady is the greatest football player ever

That offseason, they picked up all-purpose back Dion Lewis, who essentially had the same skill-set as White. And in typical Patriots fashion, Lewis became an overnight star. He got an extension after his first month in New England and Brady claimed that Lewis was “about to become a folk hero in New England.”

That should’ve been the end of White’s time with the Patriots. It’s not hard for a running back to earn a spot in Bill Belichick’s doghouse. In White’s rookie year, he watched fellow tailback Jonas Gray get benched a week after he set the franchise rushing touchdowns record and cracked the cover of Sports Illustrated.

Surely a guy who couldn’t even crack the rotation had much less value to Belichick.

But as Smith would say, White never b—. As a result, New England has a new folk hero. 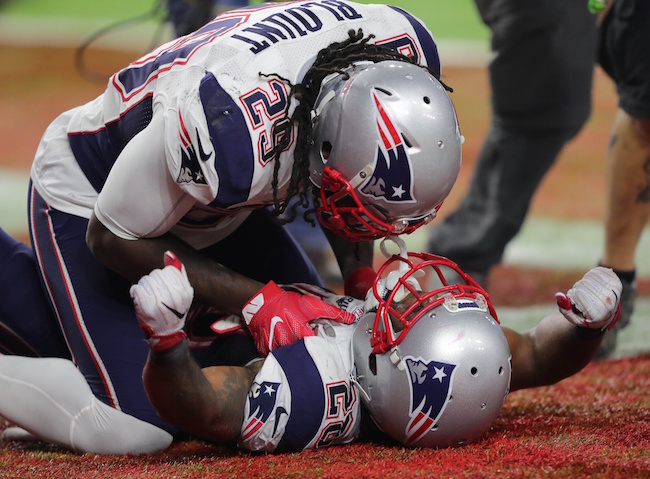 It was fitting that White’s Super Bowl heroics came in the fashion that they did. He worked his way into the rotation as a reliable pass-catcher out of the backfield, which became his role in 2016 after Lewis worked his way back from two knee surgeries.

The direct snap went to White, just like he was back in high school.

Smith joked that the Patriots owed him a post-Super Bowl invite for showing them how to maximize White’s talents. But Smith got to hear about the Patriots’ victory celebration from the guy who made it happen.

At about 6 a.m. Monday morning, Smith and White exchanged texts again. They shared a conversation about the night that was. A lot had changed in the 16 or so hours since they first touched base on Sunday.

The last text that White sent Smith on Monday morning said it all.