What gauntlet schedule? Wisconsin is a legitimate playoff contender

Wisconsin was written off before it ever played a snap in 2016.

The schedule is too tough. The defense won’t survive without Dave Aranda. The quarterback situation is too big of a question mark. The division belongs to Iowa. The Badgers might not even reach their “good, not great” bar they usually set for themselves.

Sure, the defense looked impressive without Dave Aranda. The return of Corey Clement would be a nice add after last week’s embarrassing win vs. Georgia State.

Still, with a guy getting his first career start under center, the Badgers were going to be humbled in their first true road game against a confident Michigan State team. Back to borderline top-25 territory the Badgers would go and we’d get back to our preseason projections.

Take that narrative, roll it up and chuck it deep into Lake Michigan.

Wisconsin did what few national pundits — outside of Kirk Herbstreit — thought it could do. The Badgers muscled up and showed the college football world that they’re a force to be reckoned with.

And no, this isn’t just the new favorite to win the B1G West. It’s early, but Wisconsin is now a legitimate College Football Playoff contender. 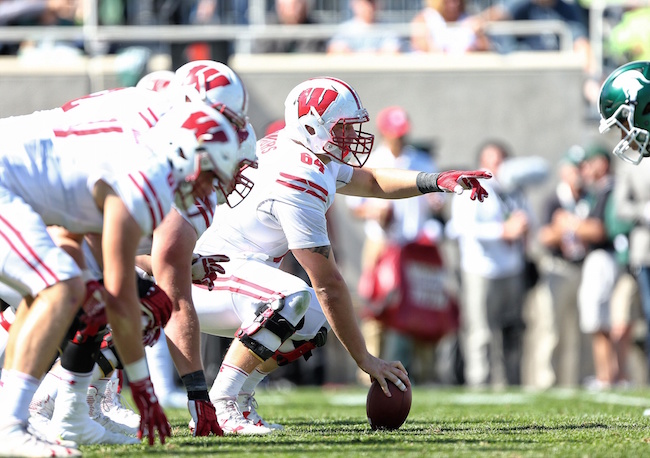 Is that getting caught in the moment? Hardly. Consider this. No other team in America has wins against two top-10 teams. Even better, neither of those wins came at Camp Randall Stadium.

You obviously didn’t watch the Badgers roll into East Lansing and dominate the No. 8 team in the country. Mark Dantonio hasn’t been embarrassed like that in a non-Alabama game in a long time. That was the most surprising takeaway from Saturday.

Even those who predicted a Badger upset in East Lansing had to think it would at least be close. After all, these two teams’ last seven games were decided by 10 points or less.

But no, it was complete domination from Wisconsin. And on the flip side, it was a complete collapse from Michigan State.

The Spartans were fumbling left and right, allowing third-down conversions and missing wide-open receivers. Last week, the storyline after the Notre Dame win was oh, MSU is still MSU. How could we ever doubt the Spartans? A week later, nobody knows what happened to MSU.

Did the Riley Bullough loss hurt? Certainly, but keep in mind what the Spartans were up against.

Alex Hornibrook was supposed to look shell-shocked in his first career start. Instead, he was poised as can be after that first-quarter fumble. Since you started reading this sentence, Hornibrook converted two more third downs.

Credit Paul Chryst for allowing the game to come to the redshirt freshman. The first quarter was mostly play-actions and high-percentage throws in the flat. Wisconsin couldn’t even establish the run early. That didn’t even matter. Hornibrook still found ways to keep drives alive.

Once again, the Badgers completely dominated the time of possession. That helped keep an elite defense fresh. Whether it was Vince Biegel, D’Cota Dixon or T.J. Edwards, the Badgers made plays from sideline to sideline.

Somewhere between Leo Musso’s scoop and score and another quarterback hurry, it became obvious.

The combination of that lethal defense and Hornibrook can take the Badgers places. And just wait until Clement is full healthy. The team that crumbled against every top-25 team in the regular season last year is now in unthinkable position. The Badgers have two wins against top-10 teams in the same season for the first time in 52 years.

This team has a long way to go to make 2016 historic. Lord knows that gauntlet of a schedule will still be brutal, regardless of what the Badgers did in September. Managing the now-massive expectations on a redshirt freshman quarterback won’t be easy, either.

But based on what the Badgers did in September, there’s no denying that this team has arrived at the big boy table.