INDIANAPOLIS — There were a few moments when Wisconsin needed it.

On the Badgers’ third drive of the second half, it felt like Paul Chryst would do it. Up to that point, it didn’t make much sense to make the switch. The Badgers had 28 points without the help of a second quarterback. Frankly, they didn’t need one. Most teams with two-possession leads don’t need a boost from a redshirt freshman quarterback.

Wisconsin is different. The Badgers were different all year.

When they needed a spark, usually they brought Bart Houston in. At the start of the season, Alex Hornibrook was who the Badgers brought in when they needed some offensive life.

Hornibrook obviously wasn’t available last night, despite the fact that he was in uniform. Contrary to what we were told all week, Hornibrook was still not good enough to play after suffering a head injury against Minnesota.

You can bet that if he was, Chryst would’ve turned to him. But as a result, Wisconsin never got the shot in the arm it needed.

As a result, the Badgers were left wondering what went wrong on Saturday night. 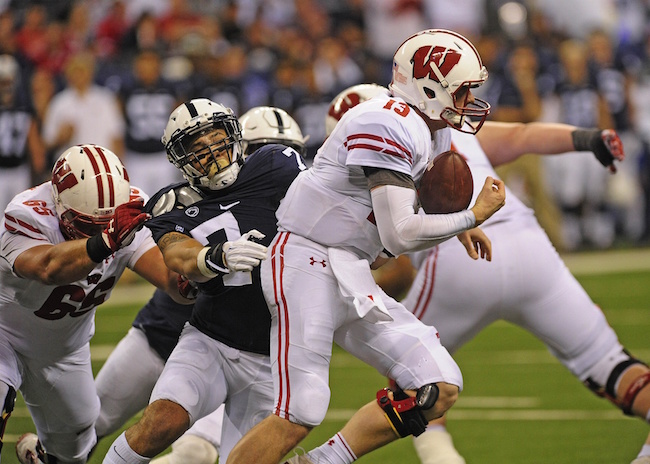 Wisconsin couldn’t get a defensive stop, and many will point to that as the reason the Badgers surrendered a 21-point lead. And obviously, that played a big part.

But down the stretch, the Badgers didn’t have anything left after the offense couldn’t sustain a drive.

In Houston’s defense, he wasn’t the main reason Wisconsin lost that game. He completed 10-of-11 passes for 108 yards in the second half. The issue was that he’s not a guy who Chryst trusts to stretch the field. Hornibrook is.

Penn State players started to get tackles for loss, and Wisconsin was put in obvious passing situations. Even though Houston completed passes, the Badgers were 1-for-6 on third down in the second half. That wasn’t going to get it done.

RELATED: Several Wisconsin players were salty about loss, took it out on photographers

Hornibrook, at the very least, could’ve prevented the Lions from loading the box. Instead, they looked like the unit that made the necessary adjustments. That’s why Wisconsin didn’t score a touchdown in the second half.

It’s too bad Hornibrook wasn’t available, because frankly, that was when Wisconsin needed him the most all year. It felt like Chryst knew that, too. That was what the B1G Coach of the Year did all season.

Houston wasn’t to blame for that loss. To assume that Wisconsin would’ve stopped the bleeding and won with a healthy Hornibrook down the stretch would be unfair. There might not have been much he could’ve done against that Penn State defense.