Being the preseason B1G favorite rarely leads to a conference title, but why?

Last week, Golden Nugget came out with its annual preseason odds for the B1G Championship.

Admittedly, they were a bit different than what I thought they’d be. I couldn’t understand why Penn State, the team that won the conference last year and returned nearly all of its high-powered offense, would only have the third-best odds to repeat.

Meanwhile, the likes of Ohio State and Michigan were the clear Vegas favorites to win the B1G Championship.

If you haven’t seen or just forgot the odds, here’s a refresher: 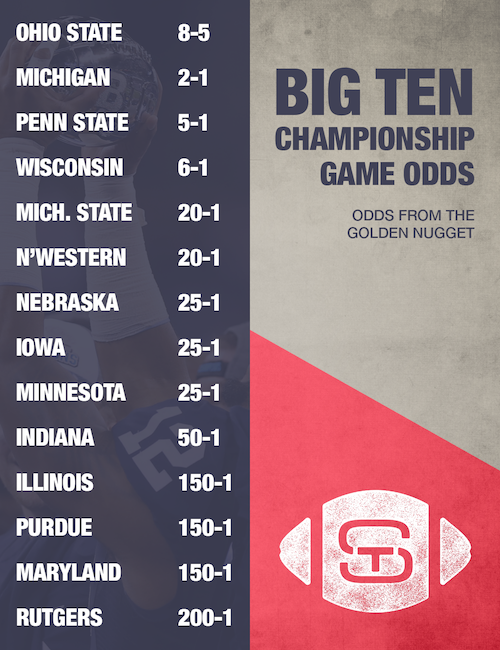 Remembering that Penn State was a major underdog last year, I dug up the preseason B1G Championship odds from 2016. The Lions were seventh in the B1G with 18-to-1 odds last July. Even Wisconsin only had 14-to-1 odds with that gauntlet schedule. The rest, of course, is history.

But then I remembered that in 2015, Ohio State was the overwhelming favorite not only to win the B1G Championship, but to repeat as national champs. The Buckeyes then came up short of even making the conference title game.

So that got me to thinking. Does being a preseason favorite ever lead to a B1G Championship Game victory? And if not, why?

More times than not, it doesn’t. Actually, only one B1G team that began the season as the conference’s top-ranked team in the Associated Press poll won the B1G Championship.

As you’ll recall, that 2014 Ohio State team didn’t lose a conference game and it dominated its way to the first College Football Playoff National Championship.

But oddly enough, that was still Urban Meyer’s only B1G Championship victory despite the fact that his team was the top-ranked B1G team entering each of the last four seasons.

So is this just an Ohio State trend? Not exactly. Three of the four B1G Championship participants the last two years began the season unranked.

NOTE: I only used the last three years because Legends and Leaders were still haunting us in 2013.

So what does that mean? And why is that the case? 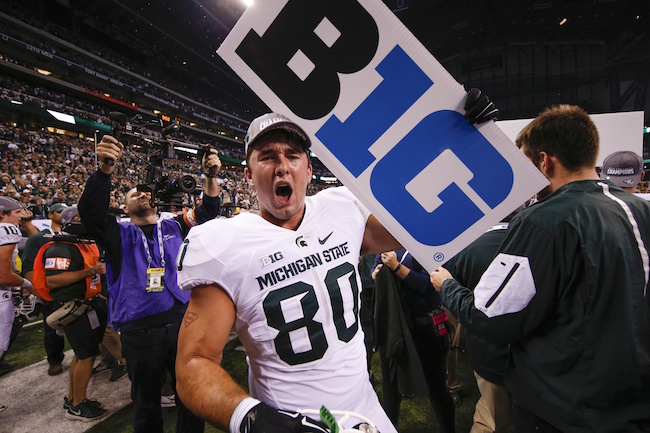 The obvious answer is that the B1G rarely has that one team that’s heads and shoulders above the competition. The last two conference title games were perfect indicators of how razor-thin the difference was between the B1G’s top teams.

Michigan State made it to Indianapolis in 2015 thanks to a pair of last-second special teams plays to beat Michigan and Ohio State. Penn State made it to Indianapolis last year because of a blocked field goal that was returned for a touchdown against Ohio State. Michigan missed the B1G Championship because of a last-second field goal at Iowa, which opened the door for Penn State.

Anybody that watched the B1G the last two years saw that while there were several top-10 teams, none of them truly dominated from start to finish.

Even compared to the rest of the Power Five conferences, the B1G’s underdog conference winner trend was unique. Here’s how many preseason favorites won their respective conference titles the last six years.

Not surprisingly, the two conferences with five of the last six national champions topped that list. They had a dominant team from start to finish. There was greater separation at the top of those conferences than there was in the B1G.

The same could be true in 2017. There could easily be four B1G teams ranked between 5-15 to start the season, all of whom are in the top tier of Golden Nugget’s conference title odds.

Maybe one will separate itself from the pack like Ohio State did in 2014. Maybe we’ll still be debating the conference’s best team after the B1G Championship like we did in 2016. We won’t know that for another eight months.

Just don’t break the bank on a B1G favorite in April.