A lot can happen in a year. At this time last year, Ryan Ramczyk was an unheard-of Division III transfer and Mitch Leidner was projected as a first-round pick (at least by Todd McShay). Last weekend, Ramczyk was drafted in the first round and Leidner wasn’t drafted at all.

So obviously, projections can change. But while individual draft cases can swing drastically, you can often forecast a team’s draft potential heading into a season. For example, we knew at this time last year that Michigan was in for a historic draft in 2017. Sure enough, nobody had more draft picks than Michigan.

Ohio State and Penn State look like two of the early favorites to do that in 2018.

That’s not very bold considering both could easily start the season in the top five. Considering Saquon Barkley was the talk of the combine a year before he could even compete in it, that’s even less bold.

But take a look up and down the rosters of Ohio State and Penn State, and you’ll see a whole lot more talent that could come off the board in 2018.

We could see something that we haven’t seen from the B1G in the seven-round era. 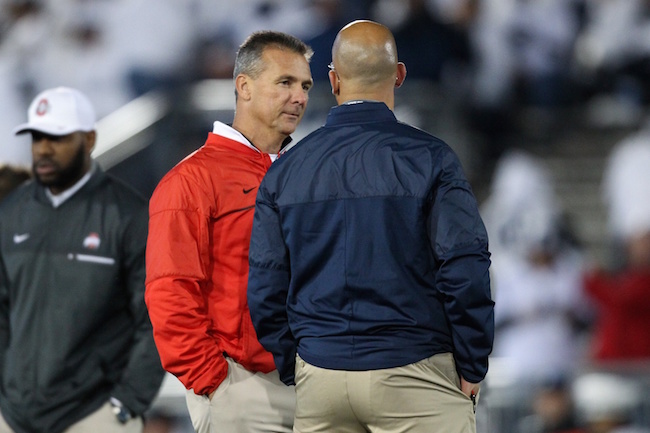 For what it’s worth, the draft battle isn’t everything. Contrary to what Tim Brewster said, however, it definitely matters. You can bet Michigan will remind everyone about its FBS-leading 11 draft picks in 2017 because recruits sort of care about getting to the NFL. Any team would be foolish not to do that.

Everybody wants to be an NFL factory, including Ohio State and Penn State. At different times (OSU certainly is right now), both have played that part.

The way-too-early mocks only provide a small sample size of potential first-round prospects. Here are the Buckeyes and Lions that could come off the board in the first round in the 2018 NFL draft:

Keep in mind that those are just players projected in the first round. There are players like Malik Hooker and T.J. Watt who were nowhere near anyone’s first-round projections at this time last year. Also remember that every Buckeye listed sans Lewis is an underclassman and could return to school in 2018.

OSU and PSU, who should wind up having multiple first-round picks, are loaded with depth. That comes with the territory when two of the youngest teams in the country compete for a playoff spot before many of their players are draft eligible. If they can meet expectations and do the same in 2017, the eyeballs on those guys will only increase.

Getting back to that depth, both of these teams have plenty of players who could rise up draft boards and even declare early in 2018.

These are the Penn State players ranked in CBS Sports‘ top 20 at their respective positions the next two years (excluding Barkley and Allen):

If you wanted to just point at the 2018 class and include Barkley and Allen, who look like legitimate first-round prospects, that’s already eight guys who could easily come off the board.

That doesn’t include guys like Kevin Givens or Juwan Johnson, both of whom could break out as redshirt sophomores and declare early for the draft.

That’s what Ohio State players have been doing year after year in the Urban Meyer era. Six Buckeyes in the last two years left after their redshirt sophomore seasons. It wouldn’t surprise anyone if Jones, Mike Weber or Damon Arnette did the same.

They are still too young to appear on CBS Sports’ rankings for 2018 and 2019. These are the Buckeyes that did make the cut (excluding previously mentioned players that appeared in mock drafts):

On paper, Ohio State is loaded with draft prospects. Anybody can see that. If Ohio State has 11 players drafted in 2018, the program will break Florida State’s record (29) for most draftees in a three-year stretch. As of May 2, 2017, that looks attainable.

In the meantime, the Buckeyes’ focus will be on beating Penn State on the field and letting those draft numbers take care of themselves. The same goes for the Lions.

It’s amazing how much perspective can change in college football. Last year when Penn State took on Michigan and its 11 draft picks, Barkley looked like he was the only one who belonged on the same field.

Just seven months later, the Lions look like they have more NFL prospects than they’ve had since they had 10 players drafted in 1996. In fact, the B1G never had a draft — since the seven-round era began in 1994 — in which two teams had double-digit draftees.