Good morning and happy Wednesday! We’re gearing up for a huge weekend of college football, with a top-five showdown in the ACC between Clemson and Notre Dame and a top-10 showdown in the SEC between Georgia and Florida. Oh, and there are two other matchups of ranked teams on the schedule too — BYU at Boise State and Michigan at Indiana.

It should be a busy week of important games, but before we get there, we have some important stories to talk about. First, we’ll discuss Georgia’s increasingly unstable QB situation. Then, we’ll talk about a handful of winless Big Ten teams and why they need to turn things around. Finally, we’ll take a look at Clemson and wonder if we should be concerned. Let’s get started!

Stetson Bennett IV has struggled in recent weeks. Is he still Georgia’s best option at quarterback? 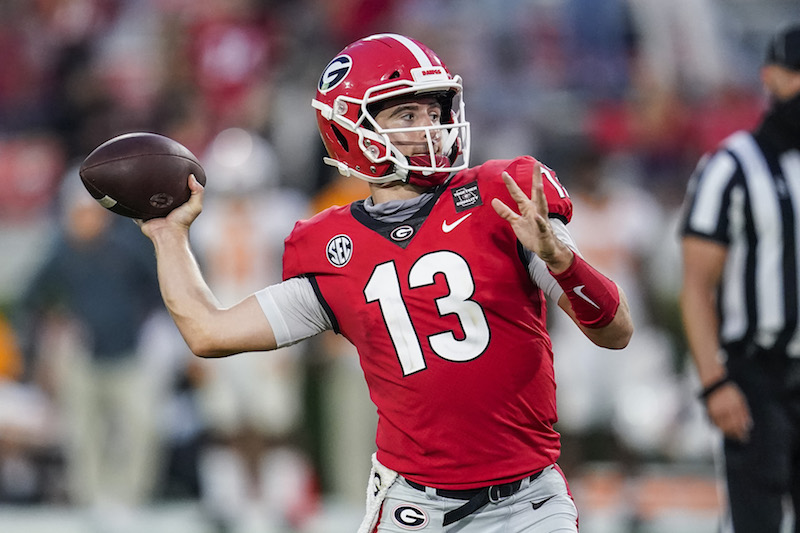 Georgia QB Stetson Bennett IV was a feel-good story to start the 2020 season. The former walk-on took over in Week 1 and led the Bulldogs to impressive wins over Arkansas, Auburn and Tennessee. Then, a loss to Alabama happened, and ever since then, the wheels have been falling off the Mailman’s bandwagon. Now, many are wondering if the Dawgs can achieve their lofty goals under a guy no one expected to be in this position heading into the 2020 season.

So, what are people saying about Bennett and the other Georgia quarterbacks? Is it time for coach Kirby Smart to make a change? Here’s the latest on the Georgia QB situation as the Dawgs prepare for a huge SEC East showdown on Saturday in Jacksonville against rival Florida:

Saturday’s Cocktail Party is sure to be exciting. Heck, one Georgia politician even sent a mass email to other members of the Georgia legislature looking for tickets. It’ll be a high-pressure situation for Bennett. Can he lead the Bulldogs to victory, or will we see a QB change in Jacksonville?

The 2021 recruiting cycle is going to be remembered as one of the strangest in history. Due to the pandemic, players aren’t currently allowed to take official visits to campuses, and that’s going to continue through the end of the year. But, that hasn’t stopped some of the nation’s top prospects from making their decisions.

So, which teams are dominating the 2021 recruiting cycle? Here’s a look at the top 10 recruiting classes as things stand on Tuesday evening (via the 247Sports composite rankings):

We’ve seen a number of top players commit over the last month. Will that trend continue in November? We’ll update the recruiting rankings again in the first Wednesday newsletter of December.

Four B1G teams are still winless. Which team(s) will finally get a 2020 victory? 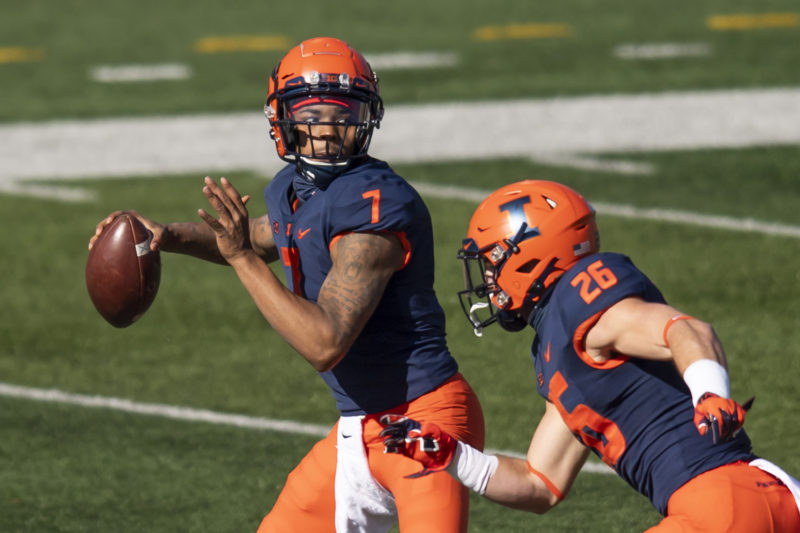 You know 2020 is bizarre when you look at the B1G standings and see which teams are still searching for their first win of the season. Penn State, Minnesota, Iowa and Illinois — four teams that were bowl eligible a season ago — are all 0-2 through the first two weeks of the season.

Penn State, Minnesota and Iowa were a combined 32-7 a year ago, with all three hitting the double-digit win total. It’s pretty safe to say that nobody would’ve expected that any of those squads would be have a bagel in the win column after two games, but here we are. All four teams need a win this weekend. Which are the mostly likely to get it in Week 3?

By the time the weekend comes to an end, at least one team will have its first win and another will remain winless. That much we know. And as important as Saturday is for Minnesota and Illinois, it’s even more significant for Penn State and Iowa. Things could really go south in a hurry if those two teams start the year 0-3.

The MAC returns tonight with a full slate of Wednesday night MACtion! All 12 teams will be playing tonight, which will certainly make our midweek evenings more exciting from now on. So, for today’s quiz, we’ll give you the name of a city and you match it to the MAC school that calls that city home. Here we go:

Clemson barely beat Boston College last week. Should we be concerned about the Tigers against Notre Dame? 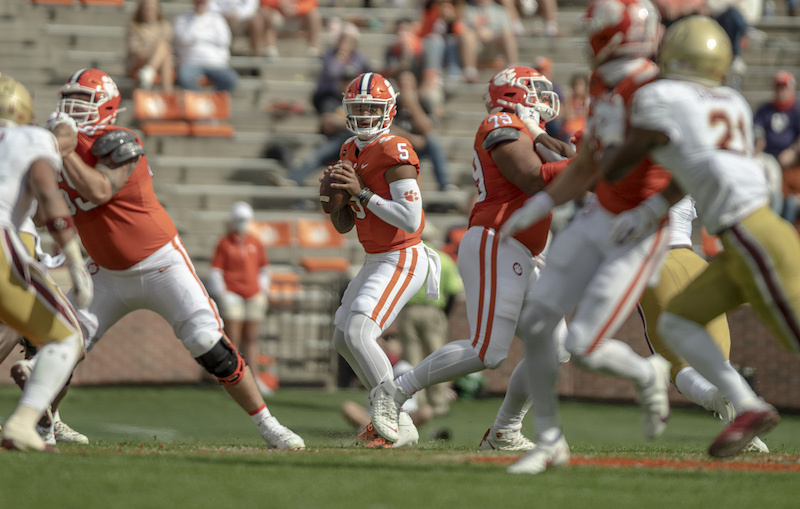 Who knew Trevor Lawrence was such an important part of the Clemson defense? We’re kidding, of course, but many fans and analysts have written Clemson’s struggles in a 34-28 win over Boston College as not indicative of the team at full strength because Lawrence was out due to ACC COVID-19 protocols. However, there were some serious flaws exposed against the Eagles.

Now, the No. 1 Tigers are preparing to head to Notre Dame to take on the No. 4 Fighting Irish in one of the biggest games of the season. So, how concerned should we be about Dabo Swinney’s squad? Let’s take a look at some of the chatter:

At the end of the day, there is some truth to Swinney’s constant complaining about being disrespected. The Tigers are a perfect 7-0, and that has to be worth something. No, it hasn’t been pretty, but those predicting a Clemson demise are far from accurate. This will be Clemson’s toughest test of the season. Leave South Bend with a win, and perhaps even Swinney will agree that his No. 1-ranked team is getting the love it deserves.

Here are the answers to today’s MAC matching quiz:

“He’s got a great personality. He’s got a competitive spirit about him. He did the same thing with Derek Mason and Vandy, was it last year or the year before when it was yelling back and forth kind of thing, so he gets into that competitive mode. … That was uncalled for, you’re a leader of men. You cannot be the guy we’re trying to control. The players don’t need to be controlling the coach, that’s not what we’re looking for.”

– ESPN analyst Kirk Herbstreit called out Florida coach Dan Mullen for his role in escalating the brawl between the Gators and the Missouri Tigers before halftime of Saturday’s game. Mullen received a $25,000 fine. 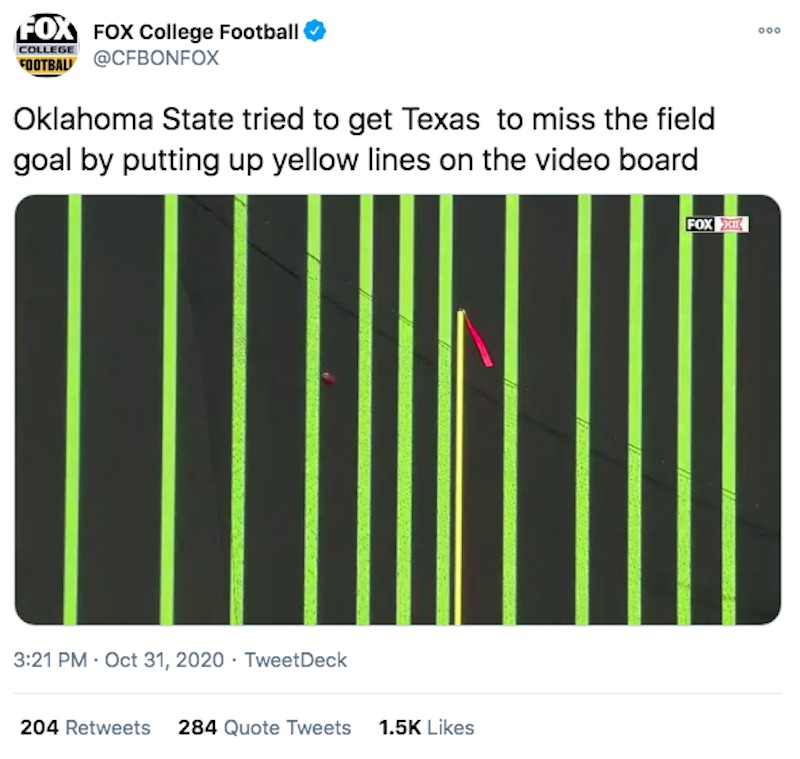 Oklahoma State used a devious method to mess with the Texas Longhorns’ kicker during Saturday’s game, flashing solid yellow vertical lines on the video board during a field-goal attempt. Cameron Dicker ended up making the kick anyway. Perhaps the football gods were angry, as the Cowboys ended up losing the game (following a few controversial calls).