Good morning and happy Wednesday! Yes, the Big Ten returns this weekend, which is huge news, but there’s good news for all you night owls, as well. No, #Pac12AfterDark won’t be back for a couple more weeks, but the Mountain West returns to action this weekend. Saturday’s slate of games includes three contests that kick off after 10 p.m. Eastern time!

In today’s newsletter, we’ll discuss a brewing QB controversy at Tennessee. We’ll also head to Auburn to dive into another less-than-ideal QB situation. And, to keep with the QB theme, we’ll also break down the Big Ten’s quarterbacks and which guys are in line to be the league’s No. 2 QB behind Ohio State’s Justin Fields. Let’s get started with today’s newsletter!

Jarrett Guarantano has continued his inconsistent play. Is it time for Tennessee to make a QB change?

The Tennessee Volunteers have hit a bit of a speed bump the past two weeks. First, there was a loss to Georgia after the Vols took a lead into halftime. Then, on Saturday, they were absolutely trounced by Kentucky at Neyland Stadium, 34-7. The biggest issue in that game? The play of QB Jarrett Guarantano, who completed 14 of his 21 passes for a measly 88 yards, 0 touchdowns and 2 interceptions (both of which were returned for Kentucky touchdowns).

As the Vols move forward, many are wondering if this team can reach its full potential in 2020 with Guarantano running the offense. Let’s look at some of Tennessee’s QB options and what people are saying:

If the Vols hadn’t laid an egg against Kentucky, we wouldn’t be having these conversations. But, a promising 2-0 start to the season has quickly fallen off the rails and Guarantano is the obvious scapegoat. With Alabama coming to Rocky Top this weekend, we’ll likely see Tennessee with a 2-3 overall record come Sunday. Will Guarantano do enough to save his job? Or, will the week off after Alabama give the Vols an opportunity to explore other options at QB?

Justin Fields is getting a lot of Heisman hype. What’s the Big Ten’s QB situation behind the Ohio State star? 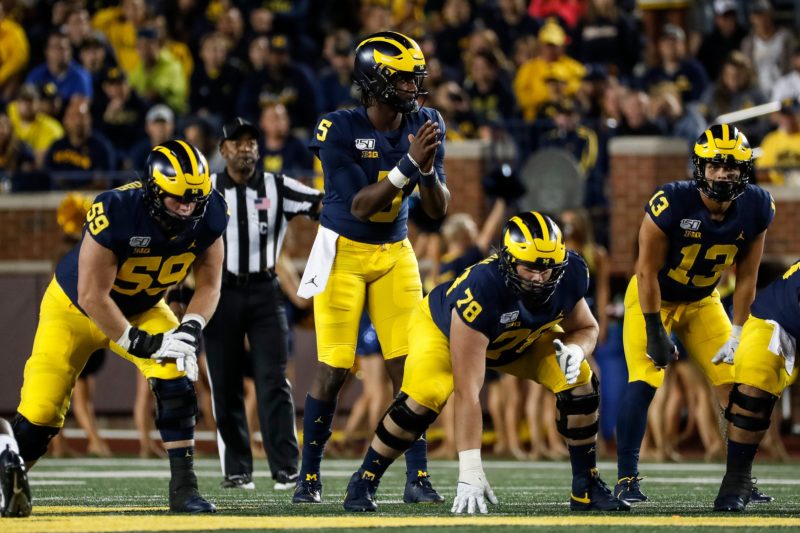 Maybe this is the 2020 talking, but it’s hard to remember a year quite as interesting for B1G quarterbacks as this season. This year’s class of QBs has everything from Heisman Trophy talent to solid starters to new kids on the block (no, not the band).

The conversation obviously begins and ends with Justin Fields, a player considered one of the top contenders for the Heisman Trophy this year. He’s also received the No. 1 spot in Ryan O’Gara’s QB Power Rankings on Saturday Tradition, though the race behind him is pretty deep. We could spend an entire section just talking about the second-year starter at Ohio State.

But because the B1G’s quarterback situation is so interesting and so unique, let’s dive into some other things to look for with Week 1 right around the corner:

Oddly enough, there isn’t much talk about three really good returning starters in the B1G in 2020: Tanner Morgan (Minnesota), Sean Clifford (Penn State) and Michael Penix Jr. (Indiana). All three are second-year starters and, right now, all could challenge to be the second-best quarterback in the B1G this fall. Perhaps those three will get some respect and there will finally be more conversations about Morgan, Clifford and Penix after Week 1.

To celebrate the return of Mountain West football this weekend, let’s make that conference the subject of today’s quiz. Of the 12 teams in the conference, five (Boise State, Fresno State, San Diego State, San Jose State and UNLV) have the names of their home cities in their school name. But, there are seven teams that don’t have city names mentioned in the name of the university. So, today, we’ll give you those seven schools, as well as the seven cities in which they’re located. Your job? Match each school with its home city:

Big things were expected of Auburn QB Bo Nix in 2020. Why isn’t he living up to the hype? 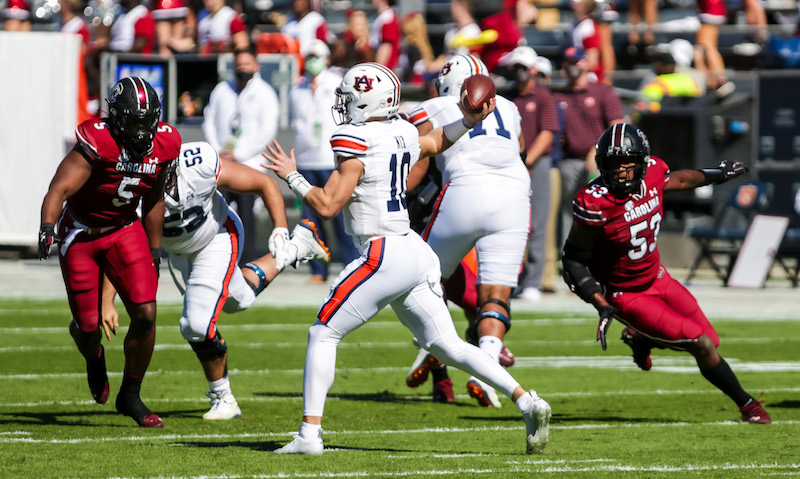 The Auburn Tigers are 2-2 on the season after a loss at South Carolina on Saturday. And, if not for a controversial ruling on this backwards spike by QB Bo Nix against Arkansas, the Tigers could very well be 1-3. Nix’s play has been inconsistent, at best. At worst, he’s regressed since a promising freshman campaign in 2019. If he can’t play better moving forward, Auburn might be in trouble.

So, can Nix turn it around? Or, is this the level of play we’re going to see moving forward? Does Auburn have any other options? Let’s take a look at the situation on The Plains:

Nix’s backup QB right now is Grant Loy, a graduate transfer from Bowling Green. Though not many are predicting Loy to usurp Nix’s starting job anytime soon, if Nix continues to hurt Auburn late in games, a change may be necessary. On Saturday, the Tigers play Ole Miss and the Rebels’ porous defense. Will this be just what the doctor ordered for Nix?

“We’ve won games around here where we go into the locker room and everybody just kind of — this is just what everybody expects. And I hate that.

“I hate to see that. I think everybody should enjoy every win. They’re hard to come by. The expectation sometimes gets to be, well you’re Alabama and you’re supposed to beat this team and if you don’t beat them a certain way then that’s not good enough, and I don’t really think that’s fair to the players. These guys work hard. They put a lot into it. And I love to see them enjoy themselves when they have success. So I was very happy to see the players so happy.”

– Alabama coach Nick Saban danced in the locker room with his players after beating Georgia. After that clip went viral, Saban weighed in on it on Monday. It’s great to see coaches embrace the fun side of football. 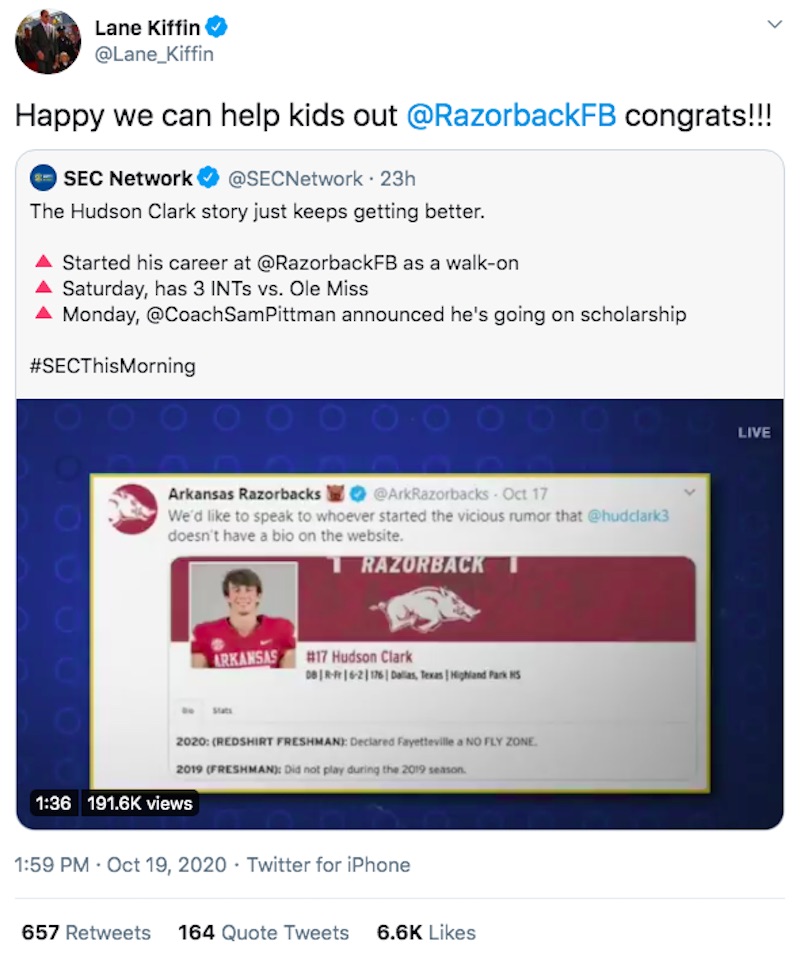 Ole Miss coach Lane Kiffin had a good sense of humor after the Rebels threw 6 interceptions in a loss to Arkansas on Saturday. Three of those picks were by Hudson Clark, who earned a scholarship for his performance. Kiffin was classy enough to congratulate Clark on Twitter in classic Kiffin fashion.