Matt VandeBerg's margin for error is small, and he knows it

CHICAGO — Kirk Ferentz spent some of his summer downtime watching the ESPN 30 for 30 documentary “Celtics/Lakers: Best of Enemies.”

The story of Bill Walton stuck with Ferentz. Before Walton joined the Celtics in 1985, he missed 323 of a possible 492 games (65 percent) with ankle and foot injuries.

Then, at age 33, Walton somehow had his first healthy season in the NBA. He earned the NBA Sixth Man Award and he was named NBA Finals MVP after helping the Celtics take down the Lakers.

“In medicine,” Ferentz said, “anything can happen.”

Ferentz is hopeful that the power of medicine will turn around what’s been a frustrating 10 months for Iowa receiver Matt VandeBerg.

Like Walton, VandeBerg suffered two serious foot injuries in a sixth-month stretch. Unlike Walton, though, VandeBerg isn’t coming off the bench this season. He’s expected to be the Hawkeyes’ No. 1 receiver. No other returning receiver caught a single pass for Iowa last year.

If the Hawkeyes are going to be a contender in the West this year, they need VandeBerg not only to be healthy, but to be at the level he was at before he went down last September.

It’s a unique position, and it’s certainly not ideal. It’s a fine line that VandeBerg and the Hawkeyes have no choice but to walk in the next few months. 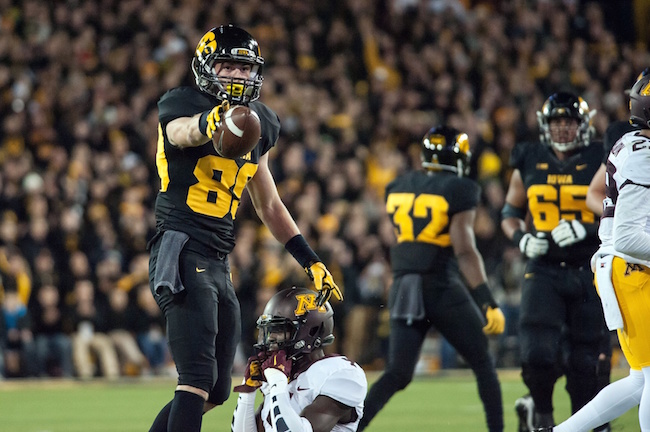 Ten months ago, VandeBerg’s life couldn’t have been much better. He was emerging as the go-to receiver for an Iowa team that was knocking on the door of a top-10 ranking. After delivering a career performance in a 42-3 victory against Iowa State, VandeBerg proposed to his girlfriend, Laura.

A lot has changed since then.

A week after the Iowa State blowout, Iowa fell to FCS power North Dakota State. A week after that, VandeBerg broke his foot in practice, which ended his 2016 season. The Hawkeyes still finished the season with eight wins, though without VandeBerg, they had the 118th passing offense in FBS.

“I’ve been told it was kind of a fluke thing, and again I was told it was a fluke thing. If it happens twice, then there’s something I must change if I want to avoid that situation.”
Iowa WR Matt VandeBerg

Off the field, there were plenty of changes in the offseason. The Hawkeyes promoted running game coordinator Brian Ferentz to offensive coordinator after Greg Davis retired. Iowa receivers Jerminic Smith, Jay Scheel and Ronald Nash all left the program. That was after the Hawkeyes lost leading receiver Riley McCarron and pass-catching tight end George Kittle to graduation.

Plenty changed in VandeBerg’s world, too. He and Laura got married. They bought a puppy and named her “Tuddy.” In other good news, VandeBerg got a medical redshirt that allowed him one final year of eligibility.

Oh, but he broke his foot again during practice in March.

RELATED: Former Hawkeye Mike Daniels: At Iowa, we work harder than you

VandeBerg decided that he didn’t need to make drastic changes. Subtle tweaks would pay dividends in his recovery. When running routes, he made sure to pick his knees up and keep his hips a little looser. Some days, he’d run nine routes instead of 12.

For some guys, taking it down a notch wasn’t a problem. For VandeBerg, it’s been a mental battle more than anything.

“It’s really tough because he’s built exactly the opposite,” Ferentz said. “He’s all about trying hard, he’s all about working extra because he weighed like 150 pounds when we recruited him so he’s had to work his tail off. And we don’t want to temper that. He’s got to be smart and realize that you can catch a lot of balls without running routes and doing that type of thing.

“We just have to revamp his approach a bit.” 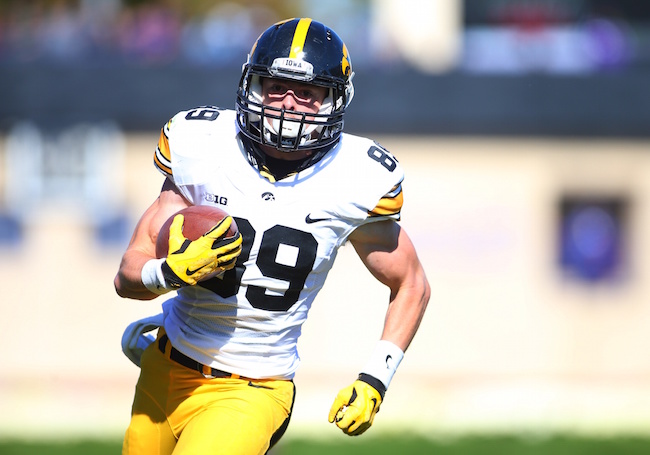 VandeBerg had to change his mindset just to see the field in Iowa City. The first time he stepped on a scale at Iowa his freshman year, he weighed 162 pounds. He wasn’t big enough to play receiver in the B1G.

Heading into his fifth year at Iowa, VandeBerg is up to 195 pounds. He bought into the program Iowa strength and conditioning coach Chris Doyle put in place. He developed a better understanding of his diet and his training regimen. VandeBerg became — get ready for the cliché — a gym rat. That’s what allowed him to rise on the depth chart and ultimately carve out a starting role.

“(VandeBerg) is all about trying hard, he’s all about working extra because he weighed like 150 pounds when we recruited him so he’s had to work his tail off. And we don’t want to temper that. He’s got to be smart and realize that you can catch a lot of balls without running routes and doing that type of thing.”
Iowa coach Kirk Ferentz

But coming off his second foot surgery, VandeBerg can’t afford to push himself like he used to. He had to take the advice of Ferentz and the medical staff to dial the workouts back a bit.

A reporter joked to VandeBerg that he was surprised Iowa didn’t put him in bubble wrap during his time at B1G Media Days in Chicago.

The Hawkeyes are being cautious with him, but they don’t want everyone walking on eggshells. That includes the Iowa defense.

“He’s a pretty tough dude so even if you hit him hard, he’ll jump right back up,” Iowa linebacker Josey Jewell said of VandeBerg. “You can still give him the full treatment just like everybody else.” 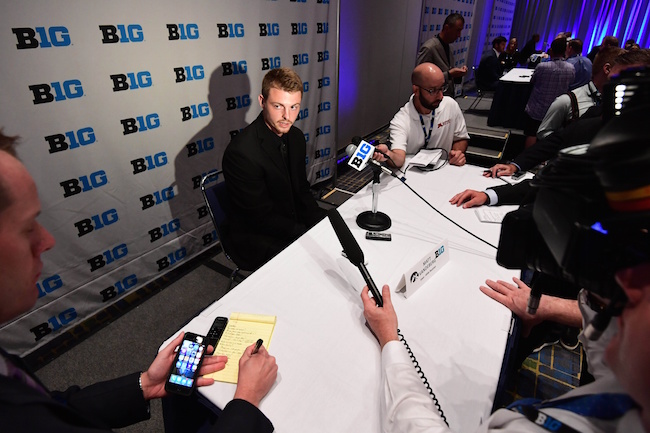 That’s the good news. VandeBerg said his foot is back to 100 percent, and that he’s been running for the last two months. He still has to get his conditioning all the way back, but he’s got an entire fall camp to do that.

He’s also got a fall camp to get on the same page as Iowa’s new quarterback. Missing spring ball didn’t allow VandeBerg to develop chemistry with Nathan Stanley or Tyler Wiegers, both of whom are battling for the starting job.

“Our quarterback,” Ferentz said, “I don’t care who it is. He’ll be a lot better quarterback with Matt out there.”

Obviously the same is true for Iowa in 2017.

The Hawkeyes did recently add New Mexico graduate transfer receiver Matt Quarells. Promising sophomore Noah Fant is “starting to look like a B1G tight end” after gaining 10-15 pounds in the offseason. And throughout camp, you’re sure to hear Ferentz talk about Iowa’s underclassmen wideouts.

Still, though, Iowa can’t afford another VandeBerg setback. He has to help Iowa’s running game by stretching the field, both vertically and horizontally. He needs to be the safety net for Iowa’s first-year starting quarterback. He has to be someone the Hawkeyes can count on in a two-minute drill.

When and if VandeBerg suits up for the season opener against Wyoming, it’ll have been 11 months since he last saw the field. It’s safe to say Sept. 2 has been circled on his calendar for a while.