CHICAGO — In the beginning of July, the B1G released the list of 42 players that would be attending media days.

Journalists complained about the lack of star power that would be present in Chicago. Allowing coaches to have the final say in the media day player representatives was viewed as “weak.”

If that was “weak,” the statement Mike Riley made with his chosen player representatives was strong.

His decision was to bring a quarterback who hadn’t played a down at Nebraska yet to represent his team at B1G Media Days. When Riley took the podium Chicago, that was the first question he was asked about. He seemed ready for it.

“He entered in rather not a really dramatic fashion, just became one of the guys and, like I said, was well liked and then eventually well respected,” Riley said of Lee on Tuesday. “And that’s the other thing, the other reason that he’s here is that he earned that job through good competition in our spring ball to be our starting quarterback heading into the season. So I thought it was very appropriate that he would be here with us today.”

Riley might’ve envisioned Lee being in Chicago for awhile. But when Lee was told to pack his bags for the Windy City, it was news to him.

“I don’t know if I expected to be invited,” Lee said. “There’s a lot of guys that have been here 4-5 years. There are tons of guys that could be sitting right here so it’s a big honor that he asked me to come here and represent my teammates.”

Lee is still a new face for Husker fans to learn. His play will be scrutinized as much as any first-year starting quarterback in the country. He could soon learn the grind of facing the Lincoln media for an entire week after a costly fourth-quarter interception.

But everything about Lee suggests that he’s ready for the spotlight. 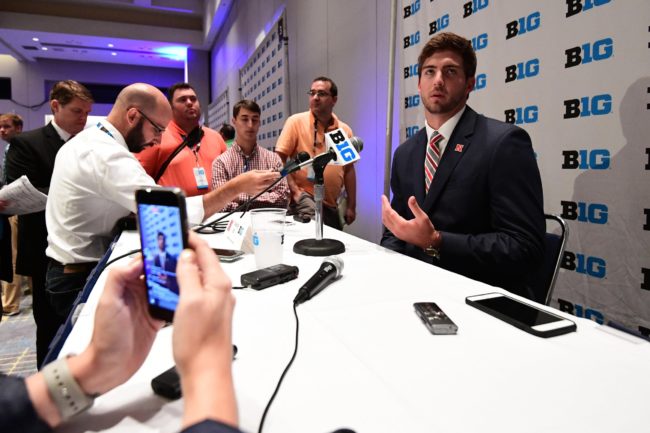 Talk to Nebraska players and it doesn’t take long to see. They love their new quarterback.

You don’t get the cliché “he’s a talented player so we like playing with him” quotes. Instead, you hear things like “he’s a down-to-earth cat” or “he’ll talk to anybody about anything.”

Nebraska safety Aaron Williams was around Lee constantly during their trip to Chicago for B1G Media Days. By Tuesday morning, he had already given Lee a new nickname.

“I call him, ‘The Golden Boy.’ He’s ‘The Golden Boy,’” Williams said of Lee. “Just look at him. He’s a good dude. I gave him that nickname today. I was talking to him and I was like, ’T. Lee, you finally look like a quarterback.’ The whole summer, he didn’t get no haircut or nothin’. He’s just been thuggin’ it real hard.

“Now, he’s cleaned up. ’T. Lee, you finally look like a college quarterback.’ Because when you see the quarterback, you see the pretty boy and this and that. T. Lee, he looked like (Ryan Fitzpatrick) with all that hair. That’s what T. Lee looked like this summer. Now, he lookin’ like an Eli Manning or Peyton Manning or a Tom Brady.”

Well, not everyone calls him “T. Lee” or “The Golden Boy.”

“He’s a smooth operator. That’s what I call him,” Nebraska linebacker Chris Weber said of Lee. “He’s just calm, cool and collected. Nothing seems to faze him too much.”

RELATED: One interesting thing we learned about each team at Day 2 of B1G Media Days

Weber and Williams didn’t just come up with those nicknames for Lee based on how he looked in front of the media in Chicago.

“He kind of fit in seamlessly. Guys wanted to be friends with him. He pulls guys towards him — if that makes sense — but he’s the type of kid you want to have as your quarterback, leading your offense.”
Nebraska LB Chris Weber

While Lee had to redshirt the 2016 season after transferring from Tulane because of NCAA rules, he got to know the first-team defense well. Riley had Lee become the all-important scout team quarterback. That allowed him to earn the respect of the defense and build connections with the young offensive players he hoped to start with in 2017.

“He was impressive,” Weber said with a chuckle. “He can throw the ball well. He puts the ball where it needs to go. Even just on scout team, the leadership that he was able to show with the scout guys, they gave us a great look each week.”

Williams learned quickly that Lee wasn’t your typical scout team quarterback. Playing five yards off a receiver was asking for trouble with Lee under center.

He made one of those throws in the Nebraska spring game:

It’s those types of plays that have Nebraska fans excited for the Lee era. His skill-set is different than previous long-time Nebraska starters like Tommy Armstrong and Taylor Martinez. While he believes he can surprise some people with his speed, Lee certainly isn’t a dual-threat guy.

When does he tuck it in and run?

Lee has, however, spent plenty of time developing his footwork. He makes two annual summer trips out to California to work with quarterback guru George Whitfield. The majority of their time together this offseason was spent on balance and evading pressure in the pocket.

It’ll be the first time that Riley gets to start a pro-style quarterback. Yes, barring injury, Lee has a firm hold on the starting job. He’ll be Riley’s first real quarterback recruit to see the field, though Lee wasn’t recruited in typical fashion.

As the story goes, Nebraska Executive Director of Player Personnel Billy Devaney said that while he was with the Atlanta Falcons, Archie Manning gave him his usual call after attending the Manning Academy. Devaney was told by Manning that Lee went up against future No. 1 overall pick Jared Goff and “put him to shame.”

ESPN NFL reporter Chris Mortensen, who is friends with both Manning and Riley, got involved. When word got out that Lee was looking for a new place to call home, Mortensen played matchmaker. Lee wound up coming to Nebraska, getting an additional year of eligibility, and looking every bit like the Husker starter.

He also won over the locker room in a hurry.

“He kind of fit in seamlessly,” Weber said of Lee. “Guys wanted to be friends with him. He pulls guys towards him — if that makes sense — but he’s the type of kid you want to have as your quarterback, leading your offense.”

There’s a sequence that happened in Nebraska’s spring game that perfectly summed up Lee’s presence. After exiting with MVP honors locked up — Riley named him the starter days later — Lee was being interviewed on the sidelines by Big Ten Network. Within seconds, receivers Stanley Morgan and De’Mornay Pierson-El came up from behind and started clowning their first-year quarterback.

Lee humbly looked down, smiled and kept it together for the rest of the interview:

By the end of the interview, Lee had half the offense at his side. That’s the kind of camaraderie every coach wants to see his quarterback have with his teammates. That’s not the look of a group that’s going to throw the quarterback under the bus after he has a bad game or two.

There could be a few of those in Lee’s future. After all, he only completed 54 percent of his passes in two years at Tulane. Lee’s skeptics would also point to the fact that he threw for just as many touchdowns as interceptions playing against American Athletic Conference foes.

Lee’s supporters would point out the fact that he played with nearly all freshmen skill players during his redshirt freshman season in 2014 and that he broke two fingers and played with a porous offensive line in his second and final season at Tulane in 2015. They’d also point to the fact that after attending the Manning Academy for four years, Lee already has next-level eyes on him.

If he takes off in Riley’s offense, expect there to be chatter about Lee breaking the B1G’s 23-year drought without a first-round quarterback. Some believe he could be the difference in leading Nebraska to its first top-15 finish since 2009.

The hype is already out there. Don’t think Lee doesn’t know that.

“I’m definitely aware of it,” he said. “It definitely makes you work harder. But I just want to get to the season and get to playing.”

Lee was already a spring captain, as voted on by the team. It seems inevitable that he’ll be voted a captain for the season before he ever plays a down.

Just like him representing Nebraska in Chicago, that won’t be a problem in Lincoln.

“To have Tanner leading the way,” Weber said, “I think guys have absolutely bought into that.”