J.T. Barrett regressed as a passer, but it's foolish to think that he's beyond repair

When J.T. Barrett announced that he was coming back for his senior season, there was a group of Ohio State fans that groaned.

They had seen enough of Barrett. Out with the old and in with the new. They wanted the Dwayne Haskins or Tate Martell era to begin after Barrett was swallowed whole by the Clemson defense in the Fiesta Bowl.

It’s an odd thought to have about a guy that as a junior, was named the Chicago Tribune’s Silver Football Award winner. Barrett is already Ohio State’s all-time leader in touchdowns and touchdown passes.

Barrett’s doubters would argue that those things were fueled by a banner freshman season and the name recognition he earned as a result of that. They’d point to the fact that since that record-breaking 2014 season, Barrett saw his completion percentage and yards per attempt decrease every year. The fact that he took a whopping 27 sacks last year didn’t help, either.

As a result, a lot of people don’t know what to make of Barrett heading into what feels like his 30th year in Columbus. He’s the unquestioned starter — much to the chagrin of said doubters — and he’s likely to be on the short list of preseason Heisman Trophy candidates.

Barrett’s record-setting freshman season created a nearly impossible bar for him to reach. Fair or not, his previous two seasons fell short of those expectations.

But if there was ever a reason for Barrett’s doubters to give him one more chance in 2017, it’s because of what he did in 2014. 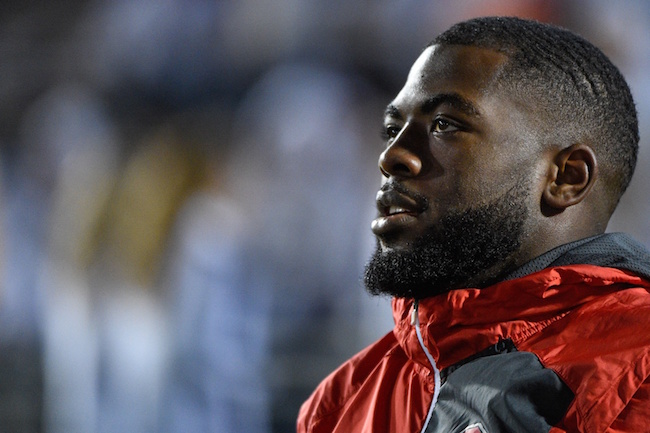 When Ohio State announced that Ryan Day was coming on board as the new quarterbacks coach and co-offensive coordinator, everyone knew that he had two titles but he had one job: get Barrett back to his freshman self.

That’s easier said than done. Tim Beck unsuccessfully spent two years trying to do that. He couldn’t bring out the things that Tom Herman brought out in Barrett — poise, accuracy, a downfield passing game — and the result was regression. Beck was not entirely responsible for Barrett’s regression, but he was certainly part of it.

With Beck off to Texas, Barrett will have a new chance with a new coordinator to recapture some of his 2014 magic.

In his first media availability session on Wednesday, Day said something you don’t often hear about quarterbacks with Barrett’s experience.

From there, Day sort of hedged his opinions. He said that he and Barrett were working a lot on his footwork and getting the ball out of his hands. The very next thing he said was that he didn’t see any hesitation out of Barrett when looking at his 2016 film.

Apparently he didn’t watch the Penn State game, or Barrett’s fourth play of the 2016 season:

The interceptions actually weren’t and have never really been Barrett’s problem. People forget that he threw 10 picks in his historic 2014 season. It’s easy to look past that when you throw 34 touchdown passes and average 9.03 yards per attempt.

That’s perhaps the most notable difference and the biggest frustration with Barrett the last two years. He doesn’t look as confident throwing the ball as he did as a redshirt freshman in Herman’s offense.

Remember how poised Barrett was in 2014 against Michigan State? Go back and watch the film against Cincinnati, too.

Did better pass protection and better receivers have something to do with that? Of course. But I still think that as much as than anything, Barrett’s production was the result of how comfortable he was in Herman’s offense.

He used to do things like this against quality secondaries:

If you need more convincing of Herman’s impact, go back and look at Cardale Jones during the 2014-15 title run compared to 2015 with Beck. Like Barrett, Jones became indecisive and his deep-ball mechanics struggled. Shoot, he didn’t look comfortable on intermediate throws, either.

After just one season in an NFL system, the Buffalo Bills said they were willing to give Jones the offense if Tyrod Taylor didn’t resign (he did).

Barrett and Jones are obviously two different quarterbacks with different career paths. Each struggled to match their 2014 success without Herman. Beck was a swing and a miss the last two years.

Who knows if Day will be the same thing?

We do know that in Day’s one year working with Sam Bradford, who was coming off a torn anterior cruciate ligament, he took a career 59-percent passer and turned him into the most accurate single-season passer in Philadelphia Eagles history. Bradford followed that up last year by setting an NFL record with a 71.6 completion percentage.

In other words, Day has fixed damaged goods before. Some view Barrett as damaged goods. Regardless of whatever quarterback guru the Buckeyes brought in, many believed and still believe that Barrett peaked three years ago. Maybe he did.

But it’s amazing what quarterbacks are capable of when they’re in the right situation. We saw that in 2014.