Urban Meyer’s 2017 class is deep, even by his powerhouse standards. That much is obvious. It’s been talked about for the last year. It’ll be talked about much more in the coming months after signing day.

Barring some unforeseen slew of de-commitments in the final days, OSU’s 2017 group is locked and loaded. Never mind the fact that OSU lost co-defensive coordinator Luke Fickell, and it changed out its two offensive coordinators. That still didn’t even make a difference in the 2017 class.

OSU could lose a commitment or two in the home stretch. It could also land another big-time recruit like five-star defensive tackle Marvin Wilson.

But for now, let’s not speculate. For argument’s sake, let’s assume that OSU’s 2017 class stays exactly the same.

If it does, it stacks up against any B1G class since recruiting rankings became a thing at the turn of the century. 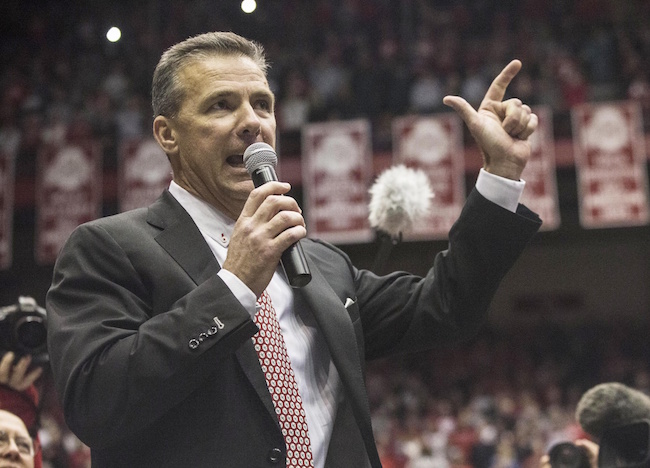 Since 247sports began its recruiting class ranking system, 11 B1G classes cracked the top five nationally. All of them were either Michigan or Ohio State, including both of their 2017 groups. So while this might look like a Michigan vs. Ohio State comparison, it’s not.

Meyer actually accomplished that feat all but one year with a full recruiting cycle at OSU. Jim Harbaugh is closing in on his first top-five recruiting class at Michigan.

And to be clear, this isn’t saying that Ohio State’s 2017 class will definitively be the most-accomplished. Lord knows OSU’s 2013 class or even Michigan State’s 2011 class would have something to say about that.

But in terms of highly-rated recruits, OSU’s 2017 class is about as good as it gets.

Before signing day, the Buckeyes’ 2017 class is already tied for second with the most combined four and five-star recruits:

You’ll notice that 2017 Michigan is tied with 2017 Ohio State in that department. Only time will tell if the Wolverines have the better recruiting class, but for now, there’s a reason that OSU gets the edge in the rankings.

No, there’s not some pro-Meyer/anti-Jim Harbaugh bias.

Michigan’s national ranking is brought down a bit by the fact that it has a handful of three-star recruits (not that there’s anything wrong with a three-star recruit). Ohio State only has one in its entire 2017 class, and that’s No. 1 kicker Blake Haubeil.

Goodness. Even he’s a stud:

The Buckeyes, according to those who evaluate talent for a living, don’t have a weak link in their 2017 class. But perhaps even more impressive, OSU’s recruits in the 247sports composite top 100 are off the charts.

Here are the most top 100 recruits (247sports composite) ever signed by a B1G team:

Seven of Ohio State’s 11 top 100 recruits are already enrolled. Not only will OSU be signing the best B1G class in history, half of it will get an extra semester to get up to college speed.

To be fair, there were plenty of recruits from OSU’s 2013 class who weren’t ranked in the top 100 and proved they should’ve been. J.T. Barrett, Gareon Conley, Darron Lee, Billy Price and Tyquan Lewis all missed the cut. If OSU’s 2017 group has five players outside the top 100 accomplish as much as those five did, that would really be saying something.

All of that stuff will play itself out. The biggest separator — in the rankings — from OSU’s 2017 class to any other B1G class is the five-star talent.

Why did #Select17 choose Ohio State?

The likes of Jeffrey Okudah, Chase Young, Baron Browning, Shaun Wade and Wyatt Davis are all five-star recruits. Up until last week, Josh Myers was also part of that group.

It’s because of that factor that OSU has a chance to catch Alabama and become the first B1G team to ever finish No. 1 in the 247sports class rankings. Meyer did that twice at Florida, the last of which was in 2010. That also happened to be the last time Alabama DIDN’T finish No. 1 overall.

Programs like Alabama and Ohio State don’t recruit simply to finish No. 1 in a website’s rankings. Consistently dominating those rankings only matter if they’re competing for national titles.

This OSU class will have hype unlike any other, especially if it finishes No. 1 overall. How will this group manage expectations? Will it become the foundation of Meyer’s next national championship squad? Or will it be remembered as the group that never quite maximized its potential?

The spotlight is on the incoming Buckeyes, and it isn’t going anywhere anytime soon.