ORLANDO — Surrounded by hundreds of the top football recruits in the country, C.J. Thorpe is in his own world in Orlando this week. The Under Armour All-America Game creates a bit of a bubble to the outside world, at least temporarily.

On Tuesday, Thorpe’s name went national. The Penn State commit recalled to an ESPN reporter the story about how his dad told Urban Meyer not to recruit him. It’s not every day that Meyer gets a “thanks, but no thanks” after showing early interest.

If Thorpe was in a bubble in Orlando, it burst.

“Yeah, yeah, yeah, yeah. Everybody from back home has been sending me the ESPN Snapchat and the tweets and all of that,” Thorpe said. “I’ve been getting everything.”

So has Thorpe’s dad, Chris, who played for Penn State in the late 80s. Some of his old teammates gave him two thumbs up.

“He’s not getting hate. He’s just having all of his Penn State boys hit him up. They’re all agreeing with him,” Thorpe said.

Make no mistake, Thorpe wasn’t embarrassed about it. Penn State was his dream school growing up. If anything, he said, it just made his Penn State commitment even stronger. As one of the original members of Penn State’s 2017 class, he’s seen this group grow in talent and in confidence during the Lions’ B1G Championship season.

Call it a new swagger. 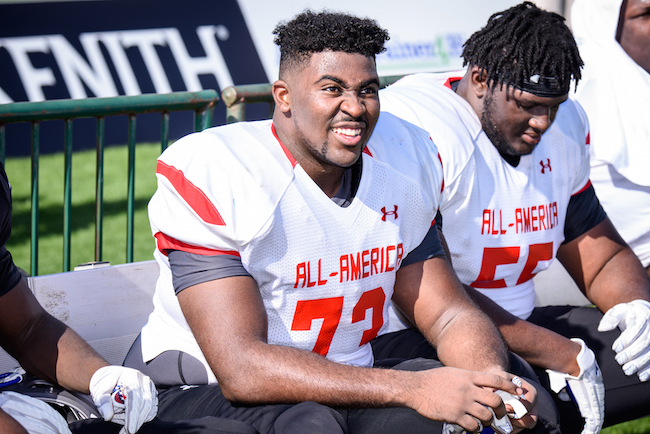 When Thorpe committed to the Lions back in April, Penn State was obviously in a much different spot than it is today, both on the field and in the recruiting world.

It wasn’t long ago that Penn State was a 7-6 team that was fighting off “negative recruiting” from B1G East rivals. Some questioned if James Franklin was the long-term answer to turn the program around.

Nine straight wins, a B1G Championship and a Rose Bowl berth later, those questions were answered. With that, Penn State got the boost it needed in recruiting.

“It’s huge. I think it’s kept a lot of people solid that are already committed,” Thorpe said. “Even those that weren’t committed that have committed, seeing that the program is on the rise is really huge for the program.”

The biggest fish landed by the Lions was Thorpe’s Under Armour All-America teammate, Lamont Wade. The No. 5 cornerback and No. 2 Pennsylvania recruit in the 2017 class was once favored the likes of Ohio State, Tennessee and West Virginia. Even Pitt once looked like a more realistic landing spot for Wade than Penn State.

So why did Wade change his tune on the Lions?

“The thing that I said in my head, if Penn State could win I would love to join that program,” Wade told 247sports after he committed on Dec. 17. “They showed me that they could win, winning that Big Ten championship and now I’m ready to go.”

Wade has been vocal about his Penn State pride in Orlando:

Thorpe said that he still felt like even if Penn State had another mediocre season that the Lions would’ve had a solid 2017 class. The difference with this class, perhaps more than anything else, is the attitude.

After the Lions’ revival, Penn State recruits could finally talk a little smack. Fellow Under Armour All-American Paris Ford, a longtime Pitt commit, was apparently pretty confident in the Panthers’ chances taking care of Northwestern in the Pinstripe Bowl.

That didn’t work out so well.

As a result, Thorpe let him hear about it. He also had no problem giving Ford the Penn State pitch, you know, just in case he wanted to revisit his in-state options.

Even if Thorpe and the Lions don’t woo any of the other top committed recruits, they’re likely looking at their top-rated recruiting class of the Franklin era. They already have commitments from 10 four-star recruits, which is two more than last year’s class.

A Rose Bowl victory would only help the Lions in their future recruiting battles with the Meyers and Jim Harbaughs of the world. And even without a Rose Bowl win, Penn State’s recruiting foundation is in place.