Twenty-three miles from High Point Solutions Stadium, a local Italian deli occupies Mountain Ave. in Springfield, NJ. It’s owned and operated by Jerry and Joey Cioffi, which isn’t hard to figure out upon entering. The deli is filled with pictures, articles, jerseys and pretty much anything involving former Rutgers defensive back Anthony Cioffi, who is the nephew of Joey and the son of Jerry.

It’s not uncommon for patrons to bring in pictures to hang in the restaurant. On one occasion, a customer came in with a framed picture of Anthony tackling another former New Jersey prep star. Jerry had no problem displaying it prominently.

After all, it’s not every day that your son chases down Jabrill Peppers.

Cioffi still hasn’t stopped hearing about play. Chasing down Peppers, who was widely considered one of the best recruits to ever come out of New Jersey, only added to his Springfield notoriety.

While their paths literally crossed that night, Cioffi and Peppers have been on completely different roads the last five months.

While Cioffi made a touchdown-saving tackle, it came in the middle of a 78-0 Michigan victory in which Peppers had two scores. Peppers finished his career as an All-American and as a Heisman Trophy finalist. He was dubbed by many as the “most polarizing” prospect heading into the NFL Scouting Combine this weekend.

Cioffi, on the other hand, didn’t receive much national attention playing for the 2-10 Scarlet Knights. The indispensable defensive back — he played in 47 games and started 33 at three different positions — wasn’t invited to the combine, so he’ll spend the weekend in New Jersey watching guys like Peppers on TV. He’ll have a close eye on the 40-yard dash.

“I want to see what these guys put up,” Cioffi told Saturday Tradition. “…I know I’m gonna be upset. Honestly, I’ll probably turn the TV off after watching some of the stuff.”

If Cioffi were in Indianapolis this weekend, he’d probably be the one that guys were chasing. 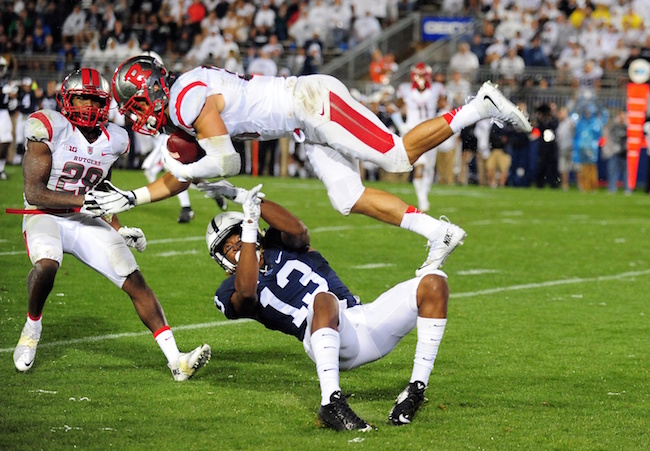 Like Peppers, Cioffi is hopeful that his freakish abilities will allow him to find a home in the NFL. The Peppers chase provided a stunning glimpse of Cioffi’s next-level speed, but that didn’t surprise those who knew him.

Cioffi was a state champion in the 100-meter dash at Dayton High School (NJ). The skills he learned as a high school sprinter — stay low as long as you can, get good leg drive, etc. — gave him a head start on the competition when his draft training began.

It didn’t take long for another video of Cioffi’s speed to make the rounds.

This year, adidas is offering an island to any prospect that can beat Chris Johnson’s combine record of a 4.24-second 40-yard dash (while wearing adidas shoes, of course). Cioff’s ears perked up when he heard about that.

“I was like, ‘Woah. Mom, we might have to pack our bags and get you an island,’” Cioffi joked.

RELATED: Anthony Cioffi won’t be at combine, but he might be B1G’s fastest prospect

But Cioffi won’t get the chance to make that kind of dream come true. Instead, he’ll be back in New Jersey, where he’ll continue his training at Parabolic Performance & Rehabilitation in preparation for a different pre-draft evaluation.

“(Not getting a combine invite) was disappointing. I felt like I could’ve been competing with those guys, running around with them and doing all of those drills,” he said. “But it’s just another chip on my shoulder that I’m gonna add and have a great pro day.”

Rutgers actually didn’t have any players get combine invites this year, which was the first time that happened since 2006. Cioffi understood that the team’s struggles would work against him in the pre-draft process.

But combine invite or not, one NFL team might be a perfect fit for him. 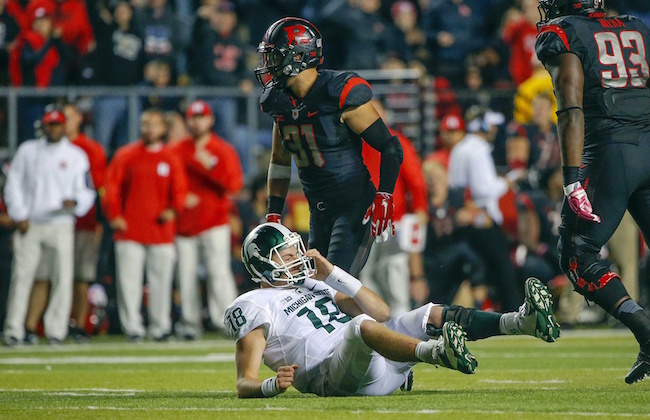 There’s a certain coach in New England that loves him some Rutgers defensive backs. When three different Scarlet Knights had interceptions for the Patriots in the AFC Divisional Round in January, Bill Belichick gave Rutgers a special shout out in the postgame press conference.

In addition to drafting their fair share of Rutgers defensive backs, Belichick and the Patriots are also known for turning fast, overlooked prospects into key contributors. Julian Edelman and Chris Hogan didn’t get combine invites, either. Of course the Rutgers-Patriots connections crossed Cioffi’s mind.

“It always does,” Cioffi said of the Patriots. “If the opportunity would present itself, God-willing, that would be a great situation learning under those guys from great veterans who know the game. I want to be a sponge my first year and learn the ins and outs. I want to be a veteran fast.”

Before he can become a veteran, Cioffi just wants to become a rookie.

He said he feels like he can play either free or strong safety, as well as in dime and nickel packages. Cioffi also played on special teams coverage units all four years at Rutgers, which could increase his chances of making a 53-man roster.

RELATED: The top 10 NFL careers from B1G players that didn’t get combine invites

With his speed not an area of concern, his biggest point of emphasis was his footwork. Cioffi worked to improve his lateral quickness and show that he can play safety at the next level.

He spent most of the last two months in Atlanta working out with longtime sports performance coach Chip Smith and former All-Pro cornerback Ray Buchanan. He drew rave reviews.

“The first week he was with me I walked down to (Buchanan) and said, ‘Who really has impressed you?'” Smith said via NJ.com. “He pointed to Anthony and he said, ‘That kid is explosive.’ I watched him do his change of direction in DB drills: Quick feet and good acceleration, and all those are the things that translate to making him a really good football player.”

If he can deliver a complete performance — a blistering 40 time world certainly help — Cioffi is confident that his interest will grow as the draft approaches. All it takes is one. If and when he gets that call, there’s sure to be quite the celebration at Cioffi’s.

After all, it’s not every day that your son starts his NFL career.