It doesn’t matter who you are. Every team has a weakness.

Even Alabama and Clemson had weaknesses last year. They have them this year, too.

So does the rest of the B1G. Here’s the biggest weakness for every B1G East team.

Wait, what? Isn’t this the unit that’s been IU’s most reliable the last two years? Yes, but gone are the All-Americans like Dan Feeney and Jason Spriggs from those teams. Key starters like Dimitric Camiel and Wes Rogers  graduated. Also gone is offensive line coach Greg Frey, who helped turn IU’s unit into one of the better groups in he country.

It’s definitely a changing of the guard up front. Coy Cronk is now IU’s top offensive lineman after a 2016 season that earned him true freshman All-American honors. He’ll solidify the left tackle spot, but there are still plenty of questions.

Will Wes Martin and Brandon Knight fill Feeney’s void on the right side? Who takes on Feeney’s leadership role? Who takes over for Rogers at center? How will this unit respond to not playing Kevin Wilson’s wide-open, offensive line-friendly style of play anymore?

IU’s offensive line is rebuilding for the first time in a while. There’s a decent chance it’ll be one of the team’s strengths by season’s end. For now, there are more questions than answers up front. 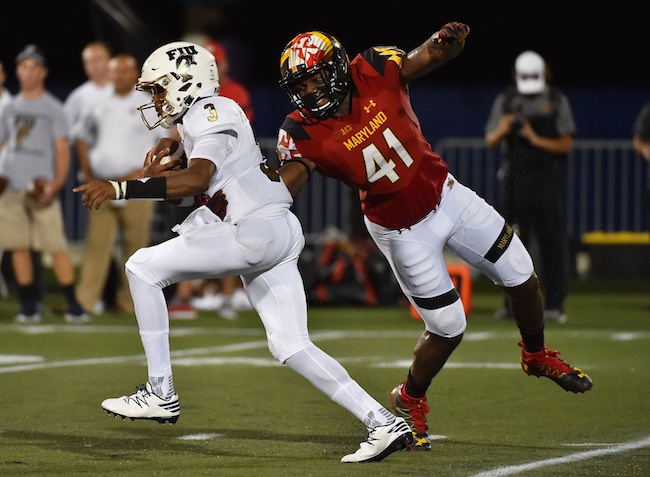 Yes, Jesse Aniebonam is one of the B1G’s top returning defensive ends. He’ll make plenty of plays in the backfield for the Terps and provide a key presence along with Jermaine Carter, Jr. But Aniebonam still hasn’t put a full season together, and neither has the rest of Maryland’s returning defensive line.

The loss of Roman Braglio will be felt, as will the departure of Azubuike Ukandu. Chandler Burkett will have to develop into an every-down player at defensive end. Kingsley Opara and Cavon Walker combined for 20 tackles for loss last year, but they have to improve as run-stuffers in the middle.

Maryland must improve on its 214 rushing yards allowed per game. Consistency was the biggest weakness with this group last year, and it’s still the most pressing area in need of improvement this year.

Losing a two-time All-American like Jourdan Lewis is never easy. He didn’t finish his career the way he wanted to in the Orange Bowl, but he was as reliable a lockdown corner as there was in college football the last two years. And if his departure wasn’t big enough, the Wolverines also lost Delano Hill,, Dymonte Thomas, Jeremy Clark and Channing Stribling to the NFL.

That’s a whoooooole lot of production to replace.

Michigan has talented defensive backs, albeit young and inexperienced ones. Sophomores Lavert Hill and Khaleke Hudson (he’s vying to take Jabrill Peppers’ place as the viper) are the only Michigan defensive backs with a career pass breakup. They each have one. Former four-star recruits Hill and David Long will both see a major spike in snaps at the cornerback position while Tyree Kinnel and Josh Metellus look like the best options at safety.

The Wolverines certainly have capable options in the secondary. Multiple guys have All-B1G potential. But until this new-look group can prove it on the field, it remains Michigan’s biggest mystery. 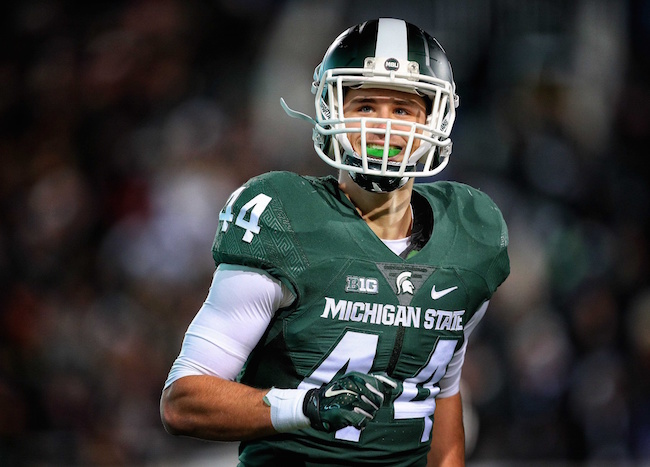 When the season ended, it looked like the Spartans could return defensive backs Montae Nicholson, Vayante Copeland and Donnie Corley. For different reasons, none of those guys are in East Lansing anymore. The Spartans also had Kenney Lyke transfer, as well as possible two-way option Kaleel Gaines. Keep in mind that was after MSU lost captain Demetrious Cox and three-year starter Darian Hicks to graduation.

Despite all the attrition, MSU does at least have some experience returning in the secondary. Justin Layne started five games last year and looked really solid in the spring game. He’s also a two-way player, but he might be too valuable to not be a full-time cornerback. Khari Willis and Grayson Miller also started in a handful of games at safety in their first two years in East Lansing.

But the secondary could face the problem that the MSU team dealt with in 2016. That is, too many inexperienced players struggled to step into bigger roles. Early enrollee Josiah Scott could be in position to start as a true freshman. With all due respect to Scott, who has been impressive so far, teams don’t want true freshmen starting in season openers.

Well, who knows. After the year that was, maybe the Spartans could use some new faces in their defensive backfield.

So here’s a thought. Ohio State could’ve gone into 2017 with Jalin Marshall, Curtis Samuel and Noah Brown. Instead, all of them left early for the NFL. J.T. Barrett’s receiver options are, once again, unproven.

Parris Campbell might be the new No. 1, though he has just 13 career catches for 121 yards. The upside is there, but can he become as reliable as Samuel was? Even if that does happen, Barrett needs more wideouts that can get separation.

The only other returning starter among OSU’s wideouts with a career start is Terry McLaurin, who has been more of a special teams player than a high-volume target in his career. We don’t know whether or not Johnnie Dixon can finally stay healthy and live up to his potential.

Promising sophomore Binjimen Victor earned some rave reviews this spring, but he’s still a sophomore who’s learning how to tap into his talented skill set. The same goes for K.J. Hill, who actually had more receiving yards than any returning OSU receiver.

Ohio State does have Kevin Wilson, who turned plenty of no-name receiver recruits into stars at Indiana. Guys like Victor and Austin Mack have a bit more to work with than Wilson’s past wideouts. It’ll be Wilson’s job to find ways to get them involved and find some consistent downfield targets for Barrett.

To be clear, I don’t think Penn State’s defensive line is weak. But if I had to pick a unit that has the most question marks and the least experience, it’s the defensive line.

The Lions have to replace ends Garrett Sickels and Evan Schwan, who combined for 21 tackles for loss and 12 sacks. Many expect Torrence Brown to become the leader of the defensive ends, even though he only has four career starts. Brown is still competing for a starting job. His competition is Shareef Miller, Ryan Buchholz, Shaka Toney and redshirt freshman Shane Simmons, none of whom have a career start.

Penn State’s defensive end rotation is still murky, but there’s more experience at defensive tackle. Curtis Cothran and Parker Cothren both stepped as first-time starters in 2016. Kevin Givens could explode in 2017 after starting six games as a redshirt freshman. The Lions are hopeful the weight room warrior will become a force on the interior.

Coming to a backfield near you…#⃣3⃣0⃣ Kevin Givens #WeAre pic.twitter.com/X8RdM4At2N

It sounds nitpick-y to say that Penn State’s defensive line is a weakness, when really, it has more potential than most units on this list. If the Lions weren’t replacing their two best playmakers on the defensive line, we wouldn’t be having this discussion.

It appeared as if Giovanni Rescigno was going to win the job by default. As of two months ago, he was the returning late-season starter and the only scholarship quarterback on the roster. But that was until former Louisville quarterback Kyle Bolin announced he as transferring to Rutgers.

Now, Jerry Kill will get at least two different experienced quarterbacks with two different skill sets to work with. Bolin is a pocket passer who averaged 8.69 yards per attempt before Lamar Jackson blew up at Louisville. Compare that to Rescigno, who averaged 5.45 yards per passing attempt but nearly 12 rushing attempts per start. There’s also incoming freshman Johnathan Lewis, who could hit the ground running and win the job in fall camp.

With all of that in mind, Rutgers quarterbacks have three combined victories (all from Bolin) as starters. The Scarlet Knights are desperate for a steadying presence at quarterback. Getting that will be the first step out of the B1G basement.