Good morning and happy Monday! The game of the year didn’t disappoint between Alabama and Georgia. Though Georgia lost, both teams have to feel good about the possibility of meeting again in the SEC Championship Game. Meanwhile, Clemson put up 73 points on Georgia Tech. The offensive explosion continues in college football!

In today’s newsletter, we’ll start getting ready for Big Ten football by wondering if Ohio State has a case for the No. 1 spot in the rankings. Then, we’ll look into whether Alabama or Clemson has the nation’s best offense right now. Finally, we’ll talk about some of the top uniform combinations from the weekend’s action. Let’s get started!

Clemson and Alabama both have elite offenses. Which top team is more dynamic on that side of the ball? 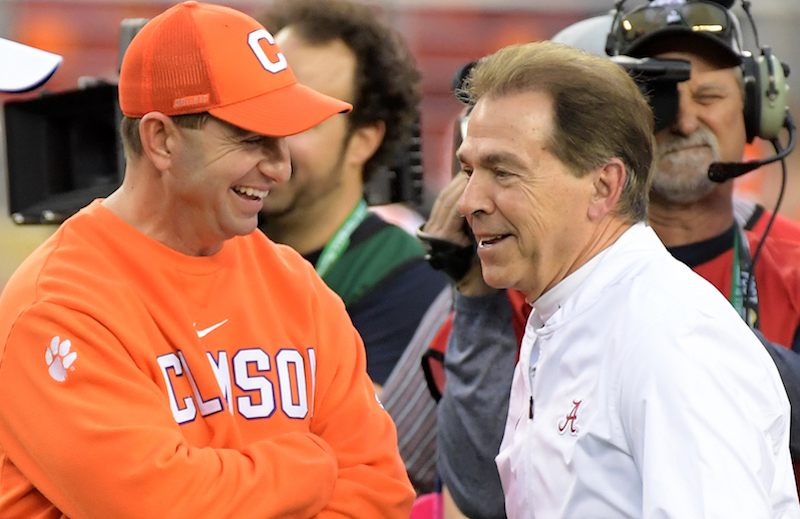 No matter how you slice it, Alabama and Clemson are the top two teams in the nation right now. Ohio State may have something to say about that when it returns to the field on Saturday (more on the Buckeyes later), but at this point, the Tigers and the Crimson Tide are the cream of the crop.

It all starts with the offenses for both teams. Alabama and Clemson each have Heisman-caliber quarterbacks, running backs and a stable of elite wide receivers. Alabama put up an impressive 41 points against Georgia’s elite defense on Saturday. But, Clemson scorched an overmatched Georgia Tech team for 73 points. So, which offense is the best in the nation? Let’s take a look at what’s being said about Alabama and Clemson around the country:

Alabama and Clemson are heavy favorites to make the College Football Playoff field as things stand right now. So, we could be racing toward yet another meeting between Nick Saban and Dabo Swinney in the Playoff, perhaps with a title on the line once again. Each team will need its offense to keep lighting up the scoreboard to get to the title game, but it appears both are up to the task.

We continue to see offenses pile up points this season. Heck, Clemson just put up 73 points on the Georgia Tech Yellow Jackets on Saturday. There is some serious competition when it comes to stats, and the national FBS leaderboards reflect that as we enter late-October.

So, which players are leading the country in a number of key statistical categories? Here’s a quick look at the FBS leaders as things stand today (via CFBStats.com):

The Big Ten returns to the field this weekend, but players in that conference will face an uphill battle to climb the statistical leaderboards, as some of the guys mentioned above have already played in six games. Will we see a shakeup this time next week? Maybe someone will snag a fourth (or fifth) interception to separate themselves from that seven-person logjam.

Ohio State is a Playoff favorite before its season starts. Are the Buckeyes the No. 1 team in the country? 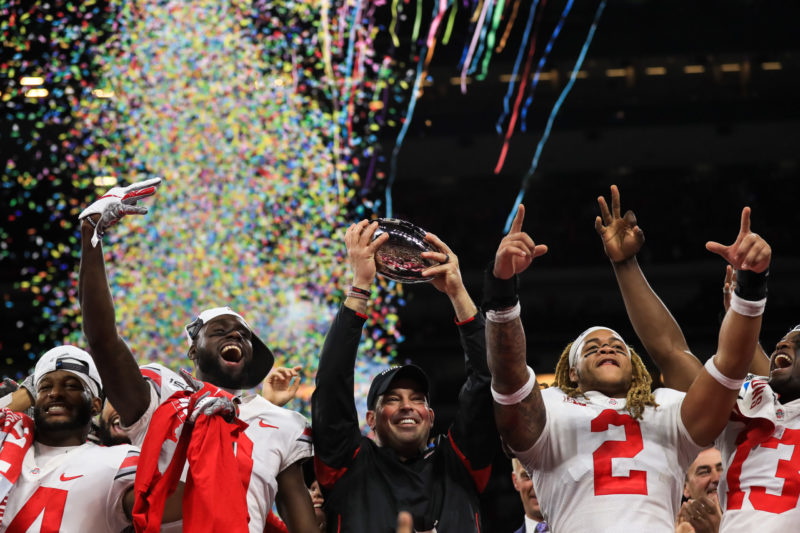 The B1G’s long-awaited return to the field will be over this weekend. Starting a month after most Power 5 conferences, the league will open the year with No. 14 Wisconsin hosting Illinois on Friday, Oct. 23, before the smorgasbord of B1G football takes over the television on Saturday.

It marks the return of No. 5 Ohio State, regarded by some as the best team in college football for the 2020 season. The Buckeyes are the preseason favorite to win the B1G title, earn a bid in the College Football Playoff and compete for a national championship. All this without playing a single game yet. And, as odd as it may sound, you might be able to make the case OSU is the best team in the country:

Ohio State opens the season against Nebraska, a game ESPN’s FPI is giving the Buckeyes a 95.4% chance to win. There isn’t much concern about OSU starting the year 1-0. Things get much more difficult in Week 2, though, traveling to Happy Valley to play No. 8 Penn State. There’s a good chance we know by Halloween whether or not Ohio State can live up to the sky-high expectations in 2020.

On Saturday, Clemson put up 73 points in a 73-7 win over Georgia Tech. For today’s quiz, can you name the last FBS school to drop 70 or more points on an opponent? Bonus point if you can name the opponent, too. (Hint: You only have to go back to last season.)

A few games got postponed, but there were still some great uniform combos. Who wore it best this week?

This week was a bit rough in the college football world, with a handful of intriguing matchups, including Baylor-Oklahoma State and LSU-Florida, postponed. However, there were still plenty of fun games, and there were also some teams that brought out great uniform combinations.

So, which teams had the best and most unique looks of the weekend? Let’s take a look at some of the top combos we saw on Friday and Saturday:

With the Big Ten returning to the field and some other interesting matchups this coming weekend, we’ll see which teams bring their best when it comes to uniforms. Tune in next Monday for some more discussion of who wore it best!

The last FBS program to score 70 or more points in a game was Ohio State. The Buckeyes dropped 73 points on Maryland in a 73-14 victory in Week 11 of the 2019 season. Will we see any additional 70-point performances from the Buckeyes as they get ready to start the 2020 campaign this weekend?

“It was emotional for me to come back today. Now, I think they handled the disruption really, really well. I’m not sure me coming back today — I think they were ready to play this game whether I was there or not.”

– Alabama coach Nick Saban was grateful to be back on the sidelines vs. Georgia after three negative COVID-19 tests. But, he said he thinks the Tide would have been ready to play with or without him. 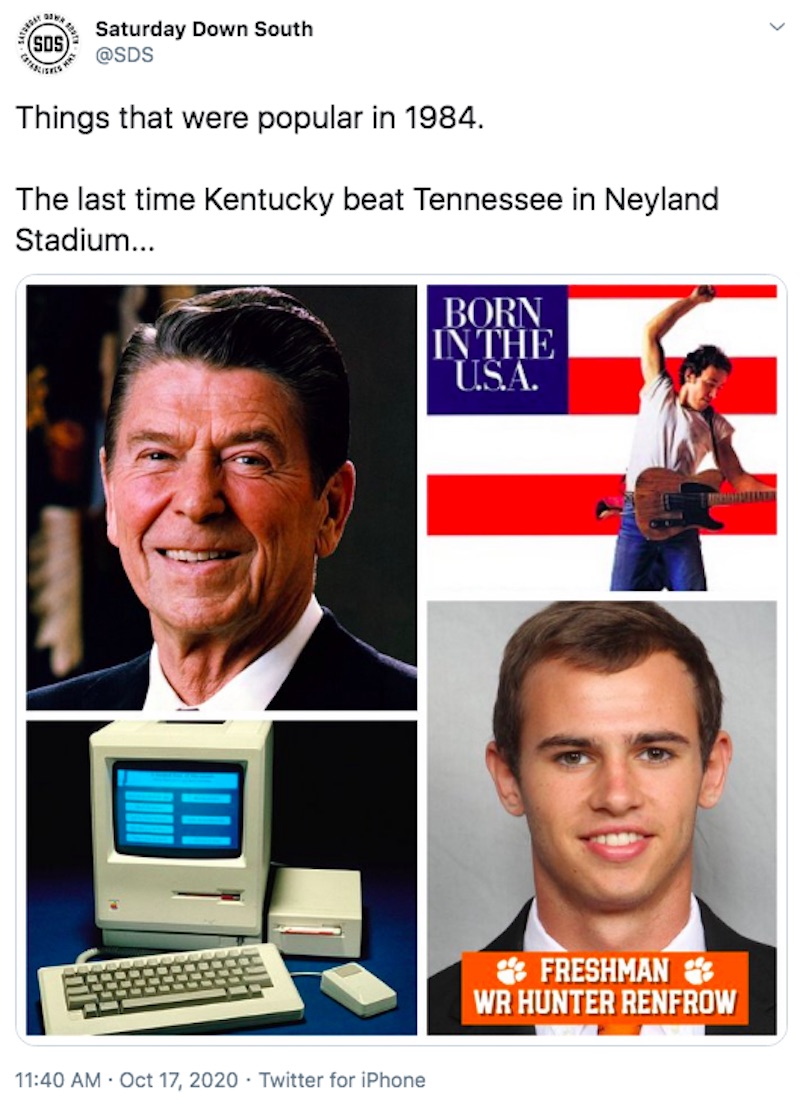 The Kentucky Wildcats went into Neyland Stadium on Saturday and beat up on the Vols, earning a 34-7 victory. That was their first win on Rocky Top since 1984. Pretty crazy that former Clemson WR Hunter Renfrow was just starting his college career then. Seems like just yesterday he was with the Tigers.