Good morning and happy Friday! We’re approaching the end of the 2020 regular season, but there are still some important games on the schedule for Saturday. Yes, we’ve lost games like Ohio State-Michigan, Purdue-Indiana, Texas A&M-Ole Miss and others, but there’s plenty to look forward to.

For today’s newsletter, we’ll discuss the Big Ten bending the rules to allow Ohio State to play in the conference championship game. Then, we’ll take a look at the disrespect Cincinnati and other Group of 5 schools are feeling. Finally, we’ll put a few ranked teams on upset alert. Let’s get started!

The B1G bent the rules to get Ohio State into the title game. Will it be enough to send the Buckeyes to the Playoff? 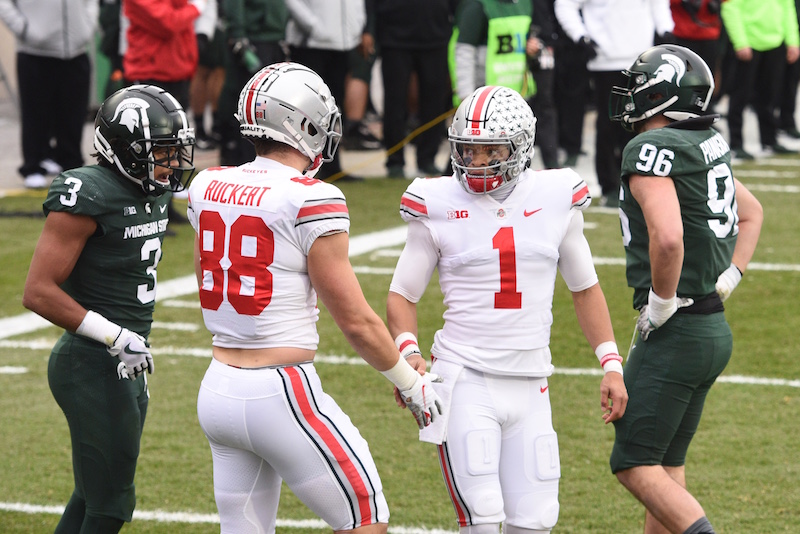 The Big Ten should really stop making bold proclamations and setting strict rules during a pandemic season. After originally postponing the fall sports season and saying that decision wouldn’t be revisited, the decision was indeed revisited, and football is currently being played. Then, the league set stringent guidelines for which teams would be eligible for the Big Ten Championship Game.

Now, those rules have been altered, too, and people have a lot to say about it. So, what’s the latest news out of the Big Ten? Let’s take a look at some headlines:

Of course, this doesn’t give Ohio State a definite path to the Playoff. The committee could still decide that six games wasn’t enough. Or, it could decide that four teams are simply better than the Buckeyes. ESPN’s Dan Le Batard said this week that the only reason Ohio State is in the top 4 is because it was ranked there in the preseason. SEC Network host Paul Finebaum described a doomsday scenario in which Ohio State could be left out of the Playoff field even at 6-0. Needless to say, it’s going to be an interesting two weeks for the Buckeyes.

This weekend, seven ranked teams that were supposed to play (No. 4 Ohio State, No. 5 Texas A&M, No. 8 Cincinnati, No. 11 Oklahoma, No. 12 Indiana, No. 20 Texas and No. 24 Tulsa) won’t be in action, as their games were canceled or postponed due to COVID-19. Still, though, we have plenty of big games on the schedule for Saturday.

So, which teams are favored to win? And which ranked schools will be in danger of an upset? Here’s a look at some of the key lines for the week:

For those keeping score at home, that’s five ranked teams that are favored to win on the road. It seems safe to say at least one of those teams will lose. We could be in for an exciting weekend of action. We’ll put a few ranked teams on upset alert later in the newsletter!

Cincinnati is upset after being jumped by 2-loss Iowa State. Are Group of 5 teams disrespected by the CFP committee?

Cincinnati hasn’t been able to play since Nov. 21 as the country continues to battle the COVID-19 pandemic. But, even with a perfect 8-0 record, the Bearcats fell to No. 8 in the latest College Football Playoff rankings, getting jumped by … wait, this can’t be right … an 8-2 Iowa State team? How can a team with two losses, including one at home by 17 points to Louisiana, be ahead of the Bearcats, you ask?

Well, you wouldn’t be the only one asking those questions. Since Tuesday night, people have been reacting to this latest slight of a Group of 5 team. Here’s what’s being said nationally about Cincinnati’s slide:

Is there any way the Bearcats can get into the top 4? They’ll need a convincing win over No. 24 Tulsa in the AAC title game on Dec. 19 and some help. Perhaps if Notre Dame beats Clemson, Alabama beats Florida, and either Ohio State or Texas A&M lose in upset fashion, the Bearcats could break the Group of 5 Playoff barrier. For now, though, after Tuesday’s rankings, that seems unlikely.

The current top four teams in the College Football Playoff rankings are No. 1 Alabama, No. 2 Notre Dame, No. 3 Clemson and No. 4 Ohio State. Those teams were also all included in the top 10 of the preseason AP Poll. So, for today’s quiz, can you remember where each of those four current top teams in the CFP rankings were listed in the preseason AP Poll?

A number of ranked teams won’t play this weekend. Which active teams are on upset alert? 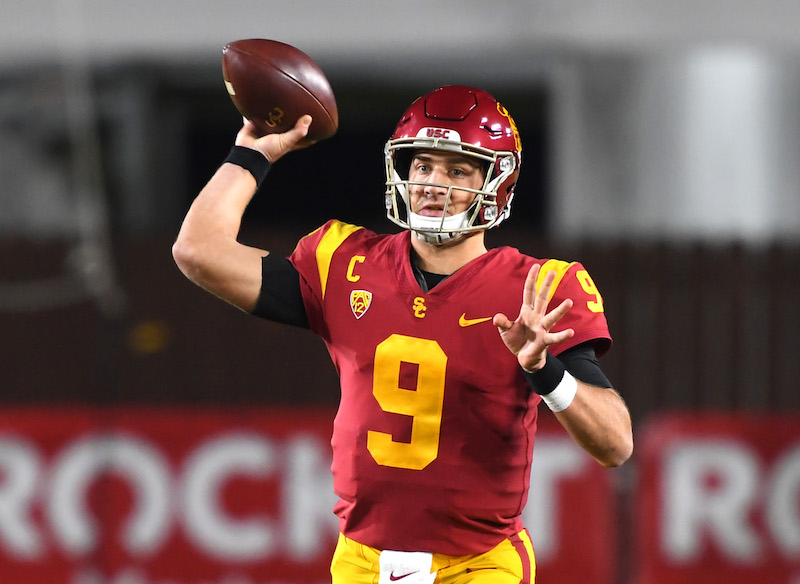 The past few days have been brutal for games getting postponed or canceled, with a number of ranked teams being forced to sit out this weekend’s action due to COVID-19 issues hurting programs around the country. But, there are still some important games that will have an impact in the rankings come Tuesday.

So, which teams currently ranked in the top 25 of the College Football Playoff rankings are in the most danger of losing this weekend? Here are four teams we think should be on upset alert on Saturday:

There are plenty of implications from this weekend’s games. We’ll see if any major upsets happen between now and the next CFP rankings on Tuesday. It should be an exciting slate of games on Saturday!

The answers to today’s CFP rankings-preseason AP Poll quiz are:

The Playoff club is a tough one to break into. We’ll see if there are any surprises in the next couple of weeks.

“I was on College GameDay in 2013 before they played Arizona and I said if USC can’t win tonight, Lane Kiffin should be fired. Well, guess what? They didn’t win and he was fired. The next morning on SportsCenter they pretty much blamed me for the firing. I said he was the Miley Cyrus of college football.

“So two weeks later I’m out at the University of Washington for GameDay and I find out a couple hours before that Lane Kiffin was going to give his first interview. I walk in the meeting and there’s Lane Kiffin. I was a little bit cautious. I just decided, screw it, I’m going to walk over to him. I don’t know whether he was going to throw a punch, not that I was overly concerned of getting punched by Lane Kiffin. I said hello. We ended up becoming fast friends. We started corresponding. He sent me a Miley Cyrus song the next day.”

– SEC Network host Paul Finebaum has been in the media industry a long time. He was asked on “The Dan Patrick Show” this week about his most awkward encounter and shared the above story about how he and Lane Kiffin ended up becoming friends. That’s just classic Kiffin. 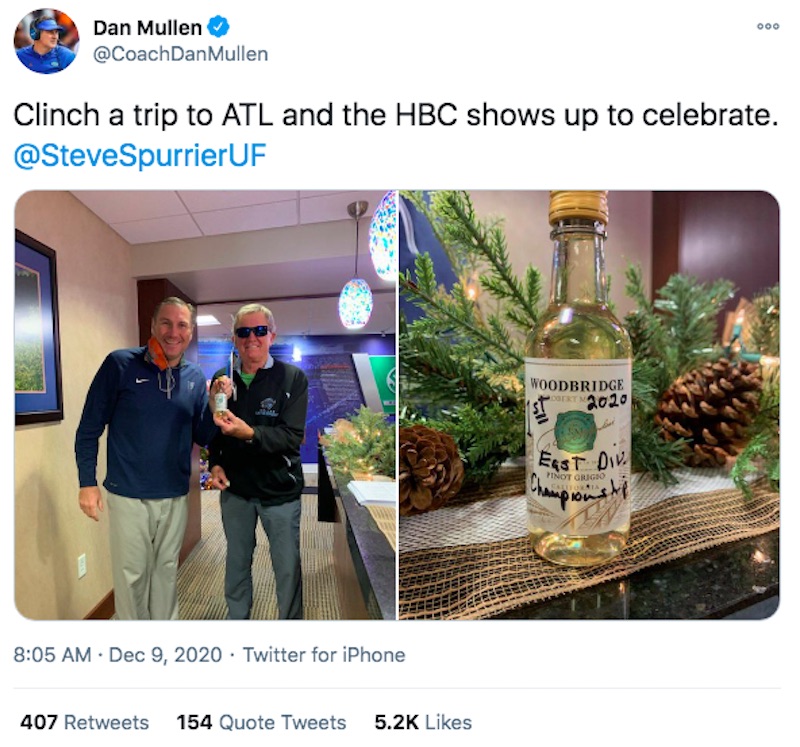 Florida coach Dan Mullen seems to have a great relationship with Gator legend Steve Spurrier. After Mullen’s Gators clinched the SEC East title, Spurrier stopped by to continue a new tradition. As you can see above, Spurrier gifted Mullen a mini-bottle of Woodbridge wine. He wrote on this one, though, so Mullen won’t be able to re-gift it to AD Scott Stricklin!