Good morning and happy Monday! The bowl games have come to an end with Texas A&M’s win over North Carolina in the Orange Bowl on Saturday night. Now, the only matchup remaining in the 2020 season is the College Football Playoff title game on Jan. 11, with Alabama battling Ohio State.

Texas fired Tom Herman and hired Steve Sarkisian. What does this mean for the Longhorns (and the Tide)? 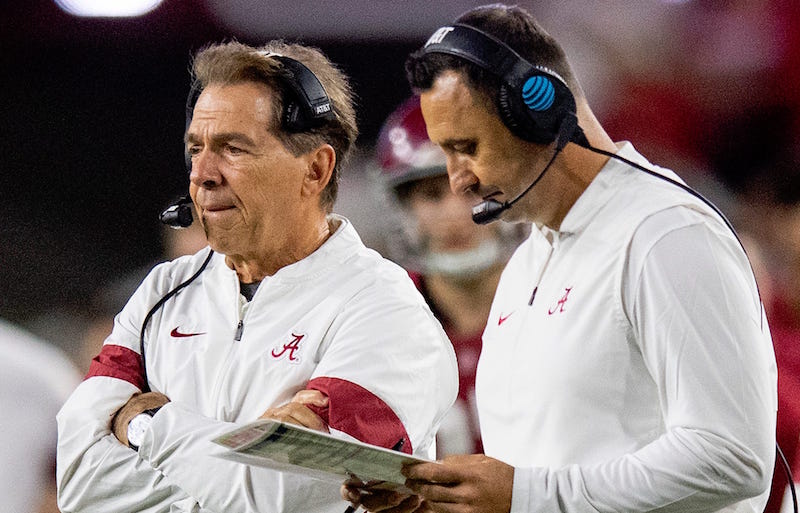 There was some big news in the college football world on Saturday morning, when it was announced that Texas had fired head coach Tom Herman. Unlike other recent coaching searches, though (cough, Tennessee, cough, Auburn), the Longhorns quickly moved to name Herman’s replacement. By Saturday evening, the Longhorns had officially announced Alabama OC Steve Sarkisian as the new head coach.

So, what does this mean for the Longhorns moving forward? And, how will the Crimson Tide replace the Broyles Award winner, given annually to the nation’s top assistant coach? Let’s take a look at some of the headlines surrounding this weekend’s surprising news:

Before Sark heads to Texas, he has one last ride with the Crimson Tide. If he can leave Tuscaloosa after dialing up a title-winning offense, he’ll leave as a legend. That’s a lot of pressure, but Sarkisian’s time under Saban has been preparing him for this moment. We’ll see if he becomes the next former Saban assistant to find success as a head coach. He won’t have a very long leash at Texas.

Bowl season has come and gone, and now the only game left in the 2020 season is the College Football Playoff National Championship Game between Alabama and Ohio State. Thus, it’s a good time to wrap up our weekly stat leaders section.

Below, you can check out the players who led the FBS level in some key statistical categories during the 2020 campaign. There are some truly impressive numbers here for a season that featured limited games for many athletes (via CFBStats.com):

Those are some great numbers. Interestingly, the three key defensive categories all featured multiple players atop the leaderboards. We’ll see which guys get the year started strong when the 2021 campaign kicks off this coming fall.

The Sugar Bowl turned into the roast of Dabo Swinney after Ohio State’s 49-28 win. Did he learn his lesson? 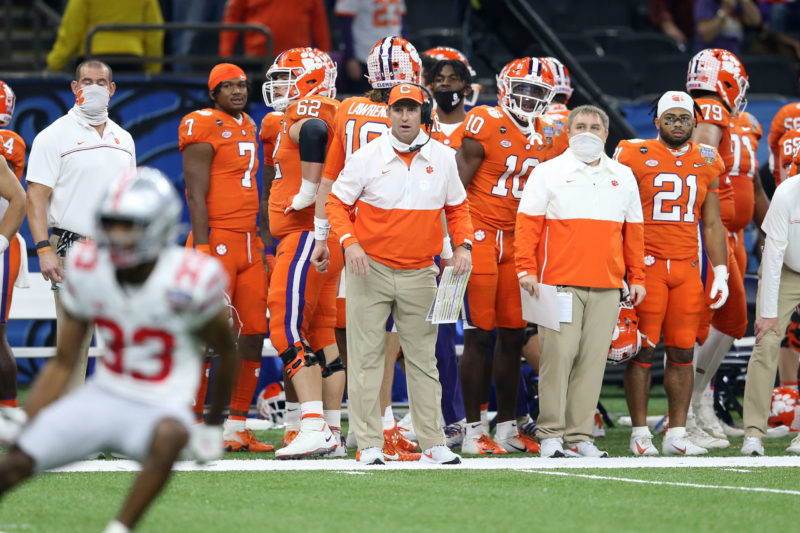 Dabo Swinney has had plenty to say about the Ohio State Buckeyes for the last two weeks before Friday night’s Sugar Bowl showdown between No. 3 Ohio State and No. 2 Clemson. It’s safe to say that, after a dominating 49-28 win, the Buckeyes silenced Swinney for at least a little while.

The fuel Swinney provided Ohio State in the days leading up to the College Football Playoff semifinal game was incredible. He ranked the Buckeyes No. 11 in his USA Today Coaches Poll ballot, arguing that a team playing only six games didn’t deserve a spot in the four-team field. Then, the Clemson head coach went on ACC Network to say the film study should be “pretty quick,” because of the lack of games OSU had played. You’d think after doing this for long enough, Swinney would know better than to spray lighter fluid on a bonfire, but apparently not.

And after the Buckeyes rolled the Tigers to advance to the national championship, Swinney became the butt of the social media jokes:

Swinney is clearly one of the top coaches in college football, and it wouldn’t be a surprise to see the Tigers back in the Playoff next year. His willingness to say just about anything is refreshing for college football, though we certainly understand why some find it annoying. However, moving forward, maybe it’s best to not completely trash your College Football Playoff opponent, especially one as talented as Ohio State.

Alabama claims 17 national championships in its storied football history. Ohio State claims eight. A total of nine different head coaches account for those 25 titles. For today’s quiz, can you name every head coach who has ever won a title for either the Crimson Tide or the Buckeyes?

Dan Mullen has been mentioned in a few NFL rumors. Would he leave Florida for a shot in the pros? 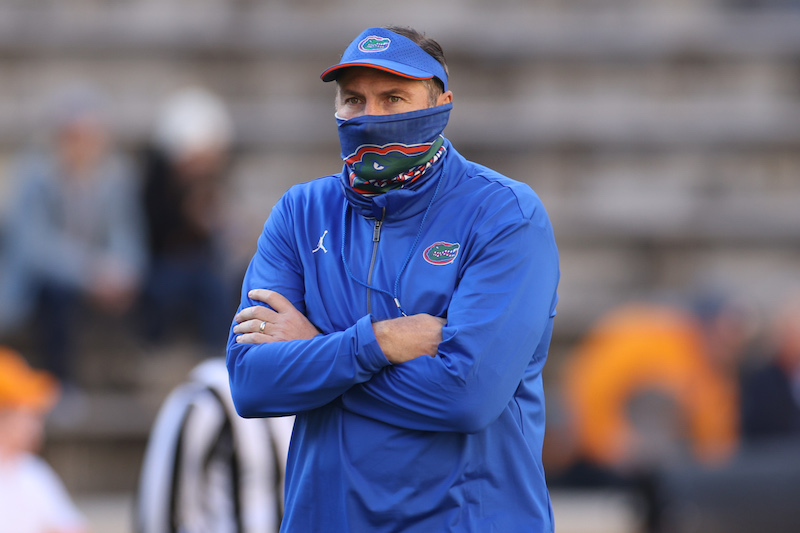 The 2020 college football coaching carousel has been spinning for a month now. But, the NFL wrapped up its regular season yesterday, meaning today is a day when many head coaches will learn whether they’ve been fired or not. Naturally, some top college coaches will at least be looked at for the NFL openings.

One name reportedly on some NFL lists is Florida head coach Dan Mullen. His name has popped up in NFL rumors before, but he hasn’t left the college ranks yet. Could he make the jump to the pros this offseason? Let’s take a look at what’s being said about Mullen:

The NFL coaching carousel is about to start spinning at a rapid pace. Hirings and firings will be made quickly, and it’s a safe bet that some college teams will be impacted with the movement of coaches. Will Mullen make the jump, or will he return to Gainesville in 2021? We’ll find out soon enough!

The nine head coaches to win national championships at either Alabama or Ohio State are:

Will Ryan Day become the 10th coach to join this list? Or, will Saban add a sixth title at Alabama to his resume? We’ll find out in one week!

“First, as we always do and should, congratulations to Texas A&M. They’ve got a great team. We knew that coming in. They should be a Playoff team. I think that watching them and watching Notre Dame, they’re so similar that you feel like that we should expand the Playoff, number one, so more guys will continue to play at the end of the year and it’ll help the bowl games. And number two, Texas A&M deserved to be in the Playoff, so give them credit for the year that they’ve had. They beat Florida. They lose one game to Alabama, like everybody else that’s played them has lost to them, and they’re big and they’re physical, and they do a great job coaching. They’ve got really, really good players.”

– North Carolina coach Mack Brown offered his praise to Texas A&M after Saturday night’s Orange Bowl loss to the Aggies. He said A&M deserved to be in the College Football Playoff, which is a sentiment many in College Station share after watching Alabama blow out Notre Dame in the Rose Bowl. 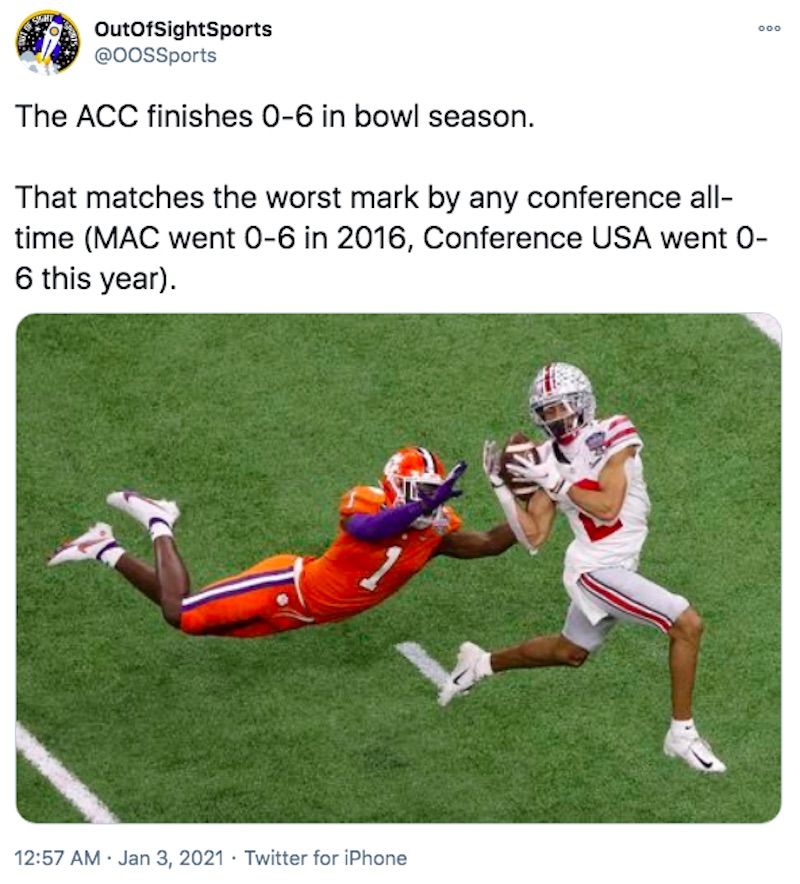 It was a historically bad bowl season for the ACC, which lost all six of its bowl games, including both College Football Playoff semifinals. Meanwhile, the SEC enjoyed a historically good bowl season, going 6-2 and beating a record six ranked teams in the process. Fans made sure to troll the ACC on Twitter for the 0-6 bowl record.