Good morning and happy Wednesday! The first College Football Playoff rankings came out last night. We’ll update you on how those look in a bit, with a deeper dive into some takeaways from the first rankings in Friday’s newsletter.

For today’s edition, we’re going to discuss why it took so long for Georgia to make JT Daniels the starting QB. Then, we’ll dive into Northwestern’s incredible 2020 resurgence. Finally, we’ll try to figure out why Dabo Swinney is still so angry at Florida State. It’s a stuffed pre-Thanksgiving newsletter! We hope you enjoy it and have a safe, happy holiday tomorrow!

JT Daniels was excellent in his first start for Georgia. Should Kirby Smart have played him sooner? 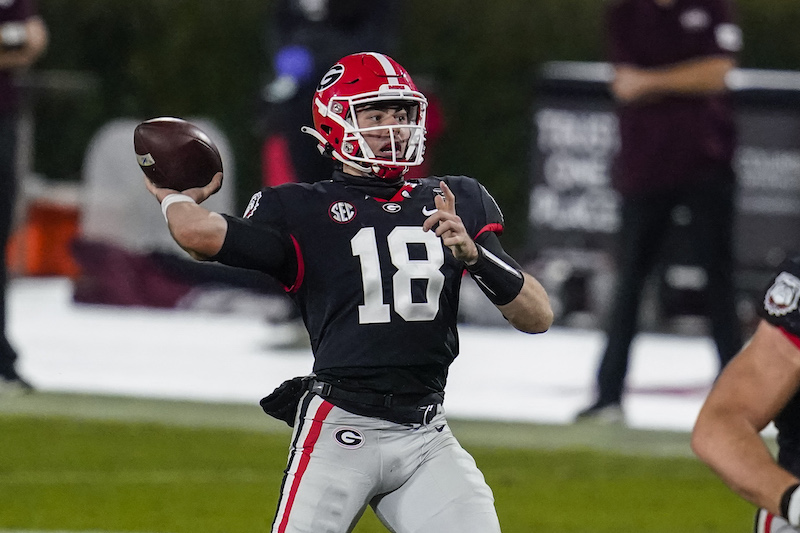 JT Daniels finally got his chance to take the field as Georgia’s starting quarterback on Saturday against Mississippi State. He didn’t disappoint, throwing for 401 yards and 4 touchdowns in Georgia’s narrow 31-24 victory over the other SEC Bulldogs. Now, many are wondering why he didn’t get the reins to the offense sooner. Coach Kirby Smart has been asked about it a lot in recent days.

So, what’s the latest on the JT Daniels situation? Let’s take a look at what media members, fans, Smart and even Daniels and his family are saying this week:

It’s important to note that Mississippi State only had 49 scholarship players available on Saturday, but Daniels’ 4-touchdown day is still a big step for the Georgia offense. The Bulldogs will take on another struggling team — South Carolina — this weekend. Can Daniels continue to put up big numbers? We’ll find out on Saturday.

The first College Football Playoff rankings of the 2020 season came out on Tuesday night. We’ll do more in-depth reaction to these debut 2020 rankings in Friday’s newsletter. But, for now, here’s how the top 25 shakes out as we approach December:

How will things change in the next rankings on Tuesday, Dec. 1? We’ll see if there are any massive upsets this week, as many SEC teams are playing their biggest rivals. Could chaos reign during the post-Thanksgiving weekend of college football action?

NORTHWESTERN ON THE RISE

Northwestern is off to a 5-0 start, the best record in the B1G. Are the Wildcats the real deal? 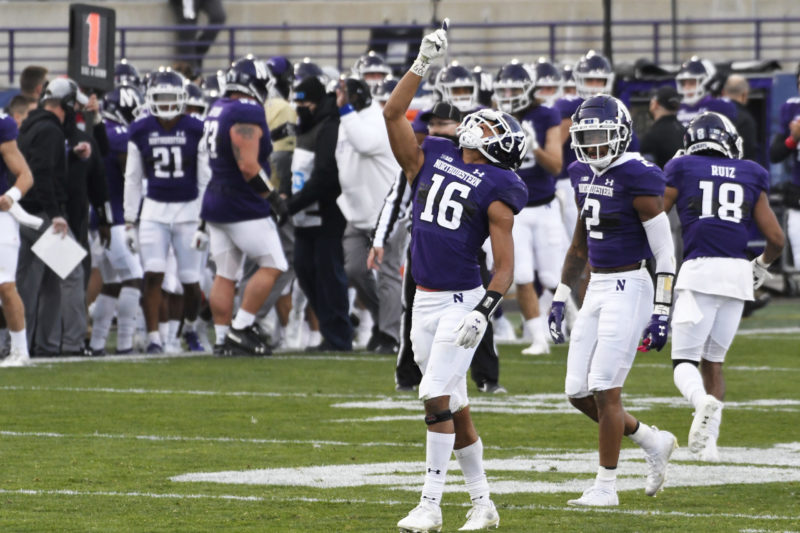 Northwestern has the best record in the B1G. If you thought that would be the case in 2020 after the Wildcats finished last season with a 3-9 record, go ahead and put your hand in the air. Now put it down because you’re lying. We caught you.

After a 17-7 win over Wisconsin on Saturday, Northwestern catapulted from the label of “good football team” to “College Football Playoff contender.” However, the latest polls don’t quite reflect the Wildcats’ ascension into the upper echelon of the B1G. Pat Fitzgerald’s bunch is ranked No. 11 in the Associated Press Poll and No. 13 in the USA Today Coaches Poll, spots that Northwestern’s social media team didn’t find respectable.

So, the big question is, are the Wildcats for real?

Whether or not Northwestern actually gets to 9-0, wins the B1G and earns a spot in the College Football Playoff, Fitzgerald and his staff deserve a ton of credit for righting the ship in such a short period of time. After Saturday’s game, the longtime head coach gave plenty of credit to staff and had a special shoutout for defensive coordinator Mike Hankwitz, who he says should be a “household name.” It’s been a collective effort in Evanston to get to the verge of a second B1G West title in three seasons. And in this crazy year, maybe a Playoff berth isn’t the most crazy thought.

Cincinnati debuted at No. 7 in Tuesday night’s College Football Playoff rankings. That’s the highest a Group of 5 team has ever been ranked in the first Playoff rankings of a season. So, for today’s quiz, can you name the Group of 5 team that has been ranked highest in each debut CFP rankings (2014, 2015, 2016, 2017, 2018 and 2019)? Bonus points if you also know where each team was ranked. 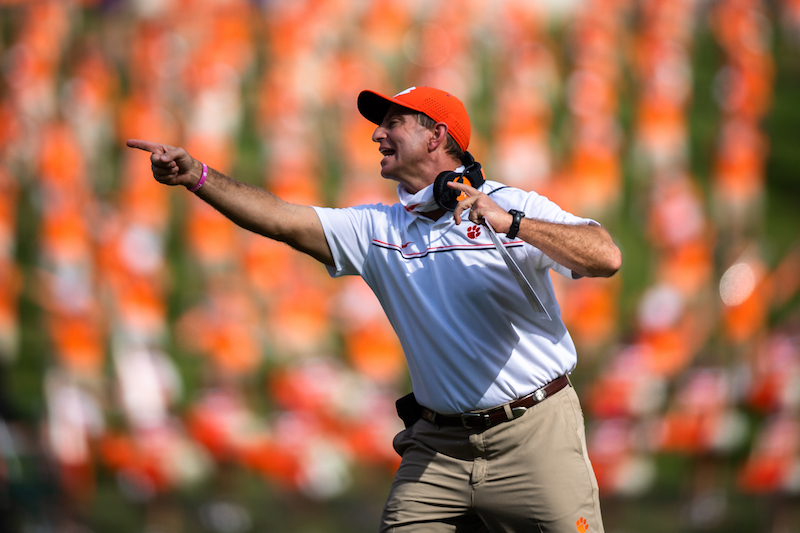 On Saturday, the Clemson Tigers were down in Tallahassee preparing for a game against Florida State. Then, three hours before kickoff, the game was abruptly postponed. According to reports, the Clemson and Florida State medical experts were at odds about whether or not to play the game, as FSU experts were concerned about a Clemson player who tested positive for COVID-19 on Friday after practicing with the Tigers all week.

Clemson coach Dabo Swinney, among others, took issue with that explanation. In the days since the game was postponed, he hasn’t stopped trashing the Seminoles for appearing to duck the high-powered Tigers. Let’s dive into this growing feud:

There’s still a chance these two long-time ACC foes could make up the game. It’s clear Swinney isn’t going to get over his grudge any time soon, so hopefully the Tigers and Seminoles can meet safely on the gridiron before the postseason. The fireworks will surely fly!

Here are the Group of 5 teams that were ranked the highest in each season’s debut College Football Playoff rankings:

“I appreciate DeVonta for bringing my name back up. I don’t think anyone actually knew I had the touchdown record until the last couple of weeks, so I appreciate him making me famous again.” 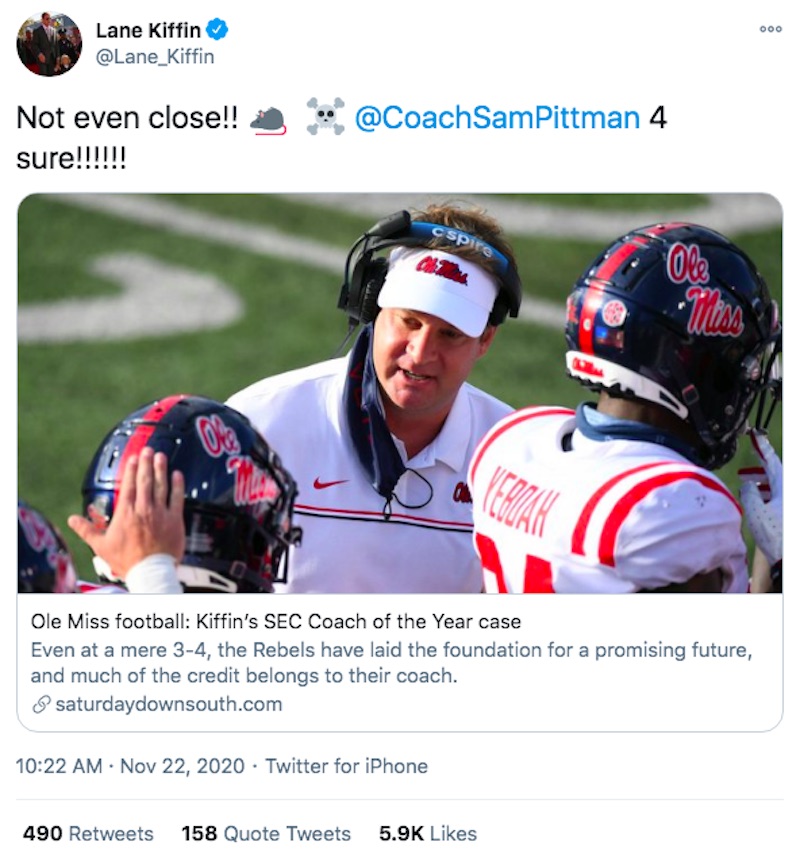 Ole Miss coach Lane Kiffin is trying to avoid the rat poison heading into Egg Bowl week. After two big wins over Vanderbilt and South Carolina, he’s rising up the SEC Coach of the Year rankings. But, as you can see above, he says Arkansas’s Sam Pittman deserves the award. (You can check out Saturday Down South writer Brian Rippee’s case for Kiffin here.)