Good morning and happy Monday! There were 45 FBS games played over the weekend, and it was great to have such a full college football schedule back in our lives. We said hello to the Big Ten and Mountain West, and will soon welcome the Pac-12 and MAC back into the fray.

Today, we’ll dive into some of that B1G madness that took place on Saturday. We’ll also look into yet another controversial call that benefited Auburn in a big way. Then, we’ll take a look at a busy weekend in terms of great uniforms. Let’s get started with today’s newsletter!

Is there any team that is luckier than Auburn? The Tigers once again escaped with a win thanks to controversy. 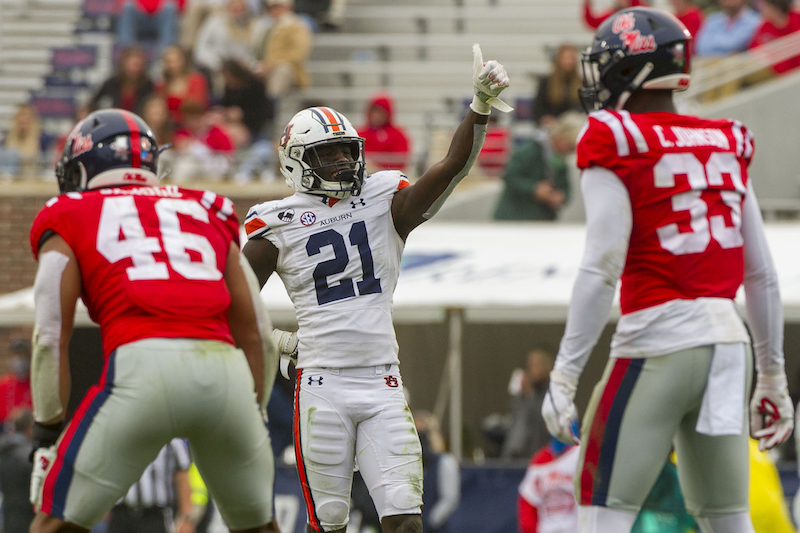 We already know that Jordan-Hare Stadium is a magical place. Who could ever forget the “Prayer at Jordan-Hare” against Georgia in 2013. You might remember a play that happened two weeks later in the Iron Bowl. It is commonly known as the “Kick Six.” Yes, the Auburn magic at Jordan-Hare is alive and well. Earlier this season, Auburn QB Bo Nix appeared to spike the ball backwards against Arkansas, but it wasn’t ruled a fumble. The Tigers kicked the game-winning field goal on the next play.

But, now, Auburn’s “luck” seems to be following the Tigers on the road, too. On Saturday afternoon, another Auburn game ended with controversy, as a late kickoff looked like it bounced off a Tiger player’s finger. It could have been ruled a touchdown for Ole Miss, but wasn’t. Let’s dive into this latest bit of controversy surrounding Auburn and SEC officials:

Ole Miss and Arkansas fans can commiserate in their anger at Auburn and SEC referees, but it won’t give them the wins they feel they should have on their resumes. Auburn hosts LSU on Halloween afternoon. A Halloween game at Jordan-Hare? Who knows what sort of craziness will ensue?

We welcomed back the Big Ten and Mountain West this weekend, but one thing remained the same — offenses continue to be the story of the season. We are seeing record-breaking performances on a seemingly weekly bases, and that certainly continued over the weekend.

It’ll take some conferences time to catch up, but there are some truly eye-popping numbers on the stat leaderboard as we approach the end of October. Here’s a look at who leads the FBS in nine important statistical categories (via CFBStats.com):

Gabriel and the UCF offense continue to dominate through the air this season. Expect the Knights to continue putting up video game numbers on a weekly basis. Hopefully, by next week, someone will have separated himself from the 13-player tie atop the interception leaderboard!

Indiana upsetting No. 8 Penn State was the highlight of the B1G’s return. What were some other surprises in Week 1? 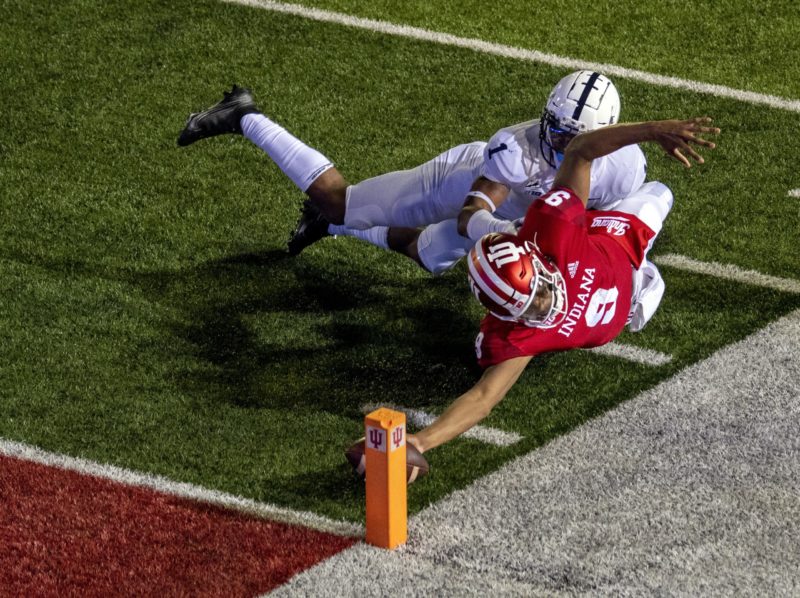 A game of inches. That’s what it came down to in Bloomington on Saturday evening with No. 8 Penn State battling Indiana. In the past, those have been the games the Hoosiers have lost, getting that one bad bounce that leaves fans pulling out their hair — if they have any left at this point.

There was plenty of hair to be pulled and lots of fingernails to be bitten on Saturday, but as IU quarterback Michael Penix Jr. snuck the football just inside the pylon on a 2-point conversion (did he actually?), 30 years of pain and suffering vanished from the hearts of passionate IU fans. It was a game worth celebrating, and one that resulted in head coach Tom Allen crowd-surfing in the locker room. And if you need to know how exciting it was, Tiger Woods demanded that a media member stream the game on his smartphone while playing in a golf tournament. Seriously.

Yes, the weekend was highlighted by Indiana’s 36-35 upset over Penn State, earning a respectable shoutout from Kirk Herbstreit on Sunday morning. The Hoosiers even received a Top 10 vote from one Associated Press voter — though they’ll still have to wait to climb that high in the polls. But IU wasn’t the only team with a surprising result in the B1G this weekend:

There is one disappointing thing about the chaos from the weekend. Penn State’s loss to Indiana does put a damper on their B1G East showdown against Ohio State next weekend, a game many thought would decide the conference champion. That still could be the case, but it just doesn’t have quite the hype it did a few weeks ago, even though College GameDay is still making the trip to State College.

On Saturday afternoon, Rutgers got the second Greg Schiano era off to a good start with an impressive 38-27 win over Michigan State. To say it has been a while since the Scarlet Knights won a Big Ten game would be an understatement. For today’s quiz, can you name the last B1G team to lose to Rutgers? And, as a bonus, Rutgers actually won three conference games that season. Can you name the three teams the Scarlet Knights beat?

This week was an incredible one for college football uniforms. Who wore it best over the weekend? 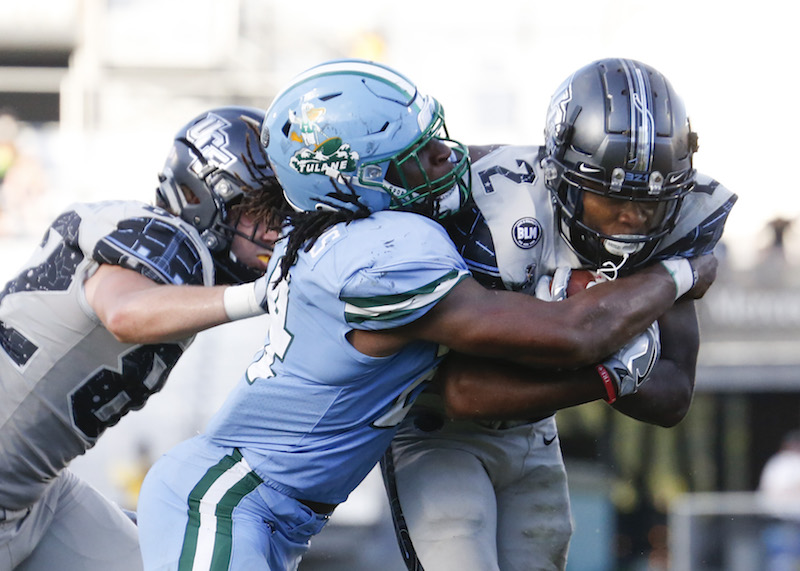 You know by now how much we love uniforms here at Saturday Football. Well, this weekend was the best of the year so far in terms of classic and new uniform combinations. Schools across the country brought out there best alternate looks this week, and it was awesome.

So, which teams had the top looks in the uniform world this week? Let’s take a look at some of our favorites from the busy weekend:

This was by far the best week of uniforms in college football. But, there are plenty of interesting combinations coming, as teams are announcing jersey combos well in advance these days. Check back here in next Monday’s newsletter to see what sort of new, exciting looks we get for Saturday’s Halloween games!

The last Big Ten team to lose to Rutgers prior to Saturday was Maryland, back on Nov. 4, 2017. The Terrapins lost 31-24. Rutgers also beat Purdue and Illinois in B1G play that season.

“It’s really a sad time for me, for Jaylen Waddle and his family. He’s got a very similar injury to what Kenyan Drake had. It’s a high ankle sprain but also a fracture, so they’ll probably have to do surgery on him. We’re gonna fly him back privately with doctors and take him right to Birmingham and see what we have to do right away. But that’s the case — and we’re pretty certain that it is — that he would probably be out for the year.

“The guy’s a great player. He’s a great teammate. He’s an exciting player to watch. Hate that people in college football can’t see a great player the rest of this season.”

– Alabama coach Nick Saban was emotional after star WR Jaylen Waddle suffered a season-ending injury on the opening kickoff against Tennessee. A former NFL doctor shared an optimistic view of Waddle’s upcoming rehab, saying he could be even better than before after surgery. That’s a scary thought! 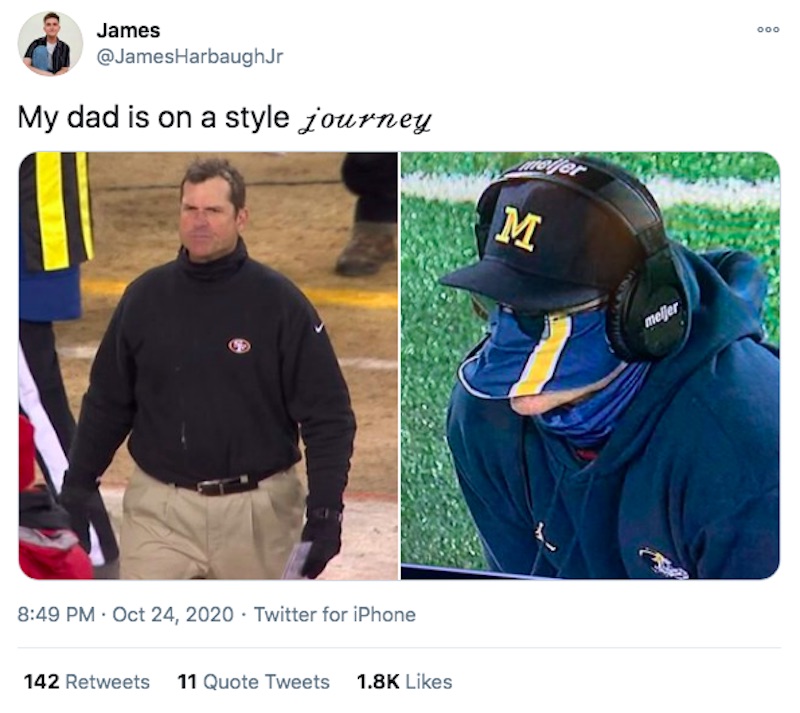 Michigan coach Jim Harbaugh looked absolutely ridiculous with his mask getup on Saturday night at Minnesota. Even his son, James Harbaugh Jr. noticed and poked fun at his dad on Twitter. He wasn’t the only one to have fun at his dad’s expense!