Good morning and happy Monday! After yesterday’s Super Bowl, the NFL season has drawn to a close. There will be some lower-level football games taking place in the college ranks over the next couple of months, but for now, we have to wait until spring football kicks off for more FBS action.

That doesn’t mean there’s nothing to discuss, though! In today’s newsletter, we’ll break down the gap between Alabama and Ohio State. Then, we’ll dive into Tennessee’s search for a defensive coordinator. Finally, we’ll look at some early 2021 Heisman favorites. Let’s get started, shall we?

Another strong recruiting class has some saying Ohio State is narrowing the gap on Alabama. Are the Buckeyes close? 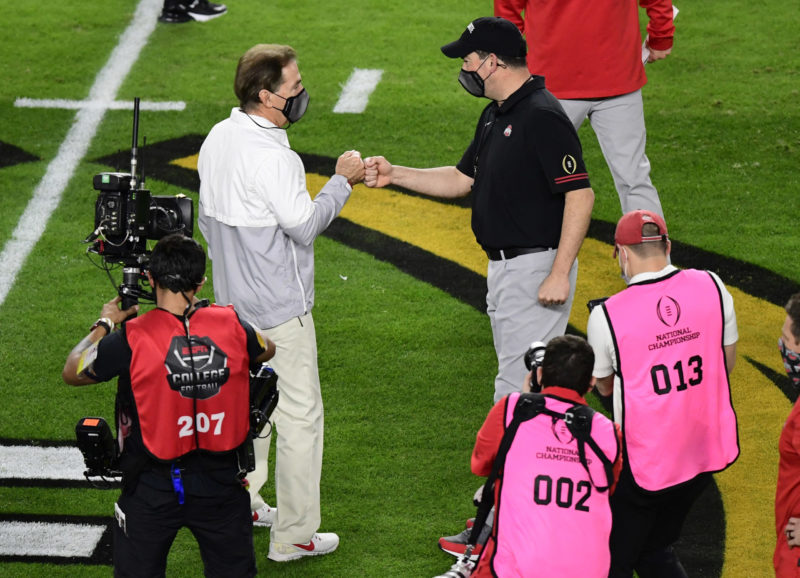 The final score from Miami on January 11 in the College Football Playoff National Championship Game indicated that Alabama had a team that was head-and-shoulders above Ohio State. The 52-24 victory for the Crimson Tide proved that, as good as the Buckeyes were, they still had some work to do to catch up to the most dominant program in the sport.

A handful of analysts believe that Ohio State is closing the gap, though. The 28-point loss last month isn’t what everyone is talking about, but rather the work Ryan Day and his staff are putting in on the recruiting trail. While Alabama still signed the No. 1 class this year according to 247Sports — the eighth time in 10 years it has done so — the Buckeyes are getting a lot of praise for their No. 2-rated class. Here’s what they’re saying about the gap between Ohio State and Alabama:

So, what’s the final verdict? There’s no question Day has done an excellent job on the recruiting front since Urban Meyer’s departure. That trend is continuing with the 2022 recruiting class, with the Buckeyes currently having 10 pledges and sitting No. 1 nationally in the 247Sports Composite Rankings. But as long as Saban is in charge in Tuscaloosa, “closing the gap” is going to be tough. USA Today’s Danny Sheridan thinks Saban will be around for at least another decade, which could be problematic for Ohio State and everyone else in the sport.

Josh Heupel has to rebuild Tennessee’s coaching staff. Who is he trying to hire? 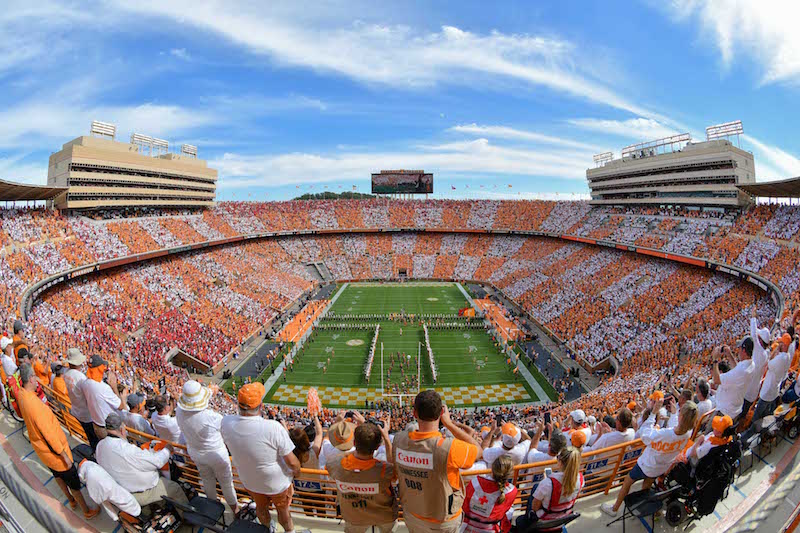 Tennessee coach Josh Heupel has yet to be on the job for a full month, but he’s hit the ground running. He’s already been through his first National Signing Day and has met all the players left on the Vols’ roster. Now, he’s working on putting together his coaching staff.

There are still some openings, particularly on the defensive side of the ball, so it’s worth taking a look at that. Who is Heupel trying to hire? Here’s the latest on Heupel’s search for some key assistants:

Finding top assistants is key to a head coach’s success. Look at what Joe Brady did for the LSU offense in 2019. Look what Steve Sarkisian did for the Alabama offense in 2020. Can Heupel find the right guys to help rebuild the Tennessee program? That will go a long way toward deciding if he’s on Rocky Top for years to come or whether the Vols are searching for a new coach in a few years.

Former Heisman Trophy winner Charles Woodson (Michigan, 1997) is one of the headliners of this year’s Pro Football Hall of Fame class, along with Peyton Manning, Calvin Johnson and five other NFL legends. Woodson becomes the 10th Heisman winner to be inducted into the Pro Football Hall of Fame. For today’s quiz, can you name the other nine guys to accomplish the impressive feat?

The 2021 season will feature plenty of star players. Who are the early favorites to win the Heisman?

Predicting who will win the Heisman Trophy prior to the season is often a fool’s errand, as the preseason favorites hardly ever win the award. In 2019, LSU QB Joe Burrow took a huge step forward from “serviceable starter” to “record-setting quarterback.” This previous season, Alabama WR DeVonta Smith broke up a string of four-straight quarterbacks to win the award.

But, just because it’s tough to project a Heisman winner before the season, plenty of people are still willing to give it a shot. So, let’s take a look at what’s being said about the potential 2021 Heisman winners:

Again, it’s possible none of those guys are even finalists for the award, let alone the winner. But, it’s also safe to say those guys will all have big years. Spring football will provide us an opportunity to get our first look at stars across the country. Who will stand out?

The 10 players who have won the Heisman Trophy and have gone on to be enshrined in the Pro Football Hall of Fame are:

Who will be the next player to join this exclusive club? It might be awhile before any other Heisman winners get the call from Canton.

“What stood out to me the most is that if I caught the ball I would’ve never been in that situation. That’s what I think about the most is just if I would have caught that pass, my finger wouldn’t be like this.

“Honestly it wasn’t painful until we went to the tent and they started pulling on it. When it happened, it didn’t really hurt. I just looked at it and it just looked weird. I was like, ‘Okay, let me go in here and see what they gotta say about it.’”

– Heisman-winning WR DeVonta Smith explains how he could have avoided a broken finger in the College Football Playoff title game. The elite receiver had a big first half for Alabama before missing the second half. 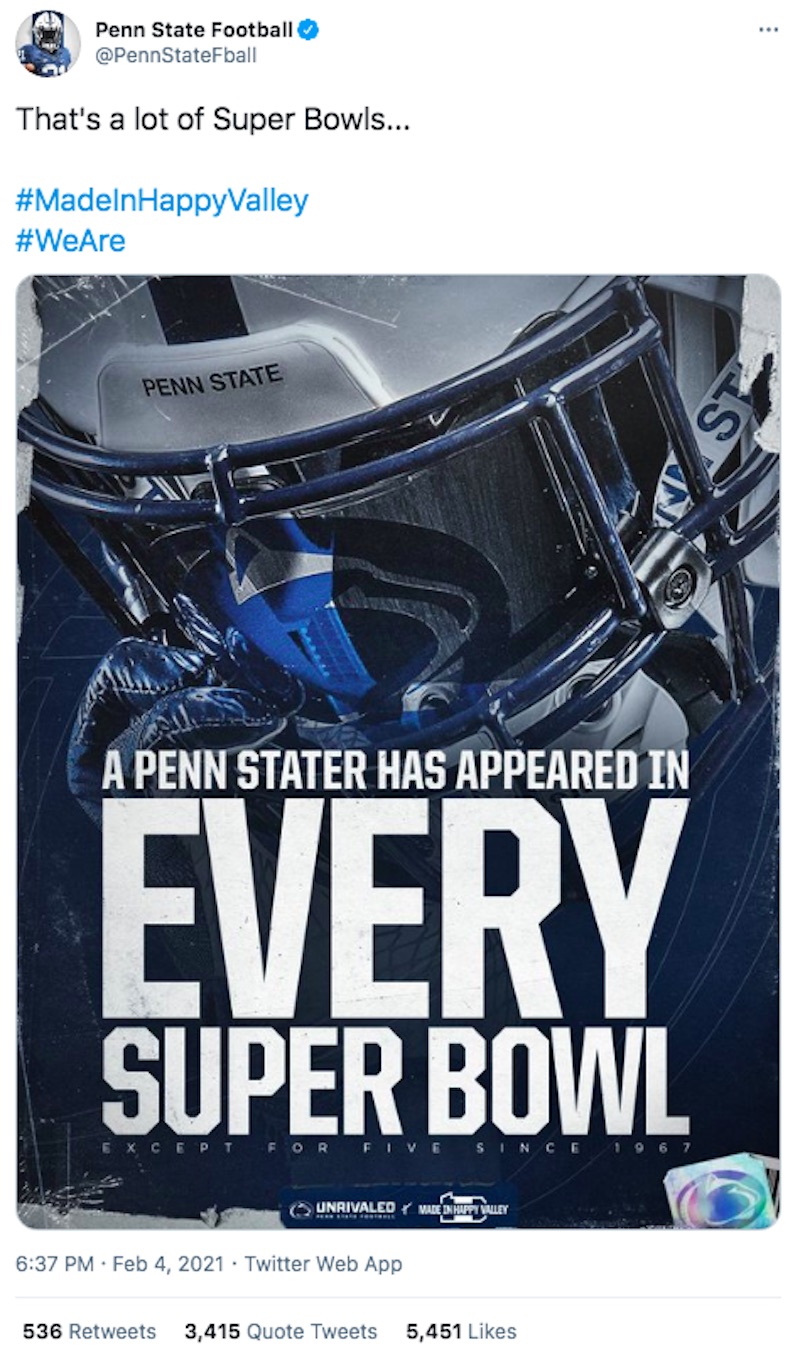 Reading the fine print is always important, even on graphics released by college football teams. As you can see above, the graphic touts that a Penn Stater has appeared in every Super Bowl. Then, when you look at the fine print, it adds the important “except for five since 1967” caveat. Naturally, other football programs and lots of fans had fun trolling the Nittany Lions for that graphic!