Good morning and happy Monday! There were quite a few blowouts on Saturday, particularly in the SEC, but that doesn’t mean we have nothing to talk about to kick off this week. Indeed, there are many interesting stories to discuss as we enter the first week of November.

Today, we’ll head to Ann Arbor, where the Michigan Wolverines are reeling after yet another disappointing loss under Jim Harbaugh. Then, we’ll head to Florida, where an ugly brawl marred the end of the first half between the Gators and the Missouri Tigers. Finally, we’ll take a look at some of the best uniform combinations of the week. Let’s get started, shall we?

Michigan’s loss to MSU may be one of the worst of the Harbaugh era. Will the Wolverines ever meet expectations? 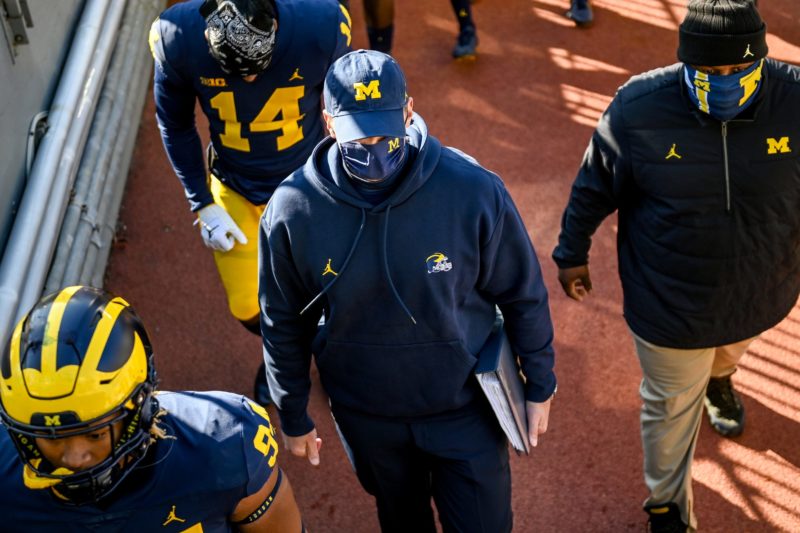 Once again, Michigan was built up as a team capable of winning the B1G East. Once again, Jim Harbaugh’s team is falling short of expectations. Hey, at least fans only had to wait two weeks before experiencing the disappointment this year, if you want to look at this as a glass-half-full situation. Michigan dropped a 27-24 decision to Michigan State on Saturday in Ann Arbor. The loss means that Harbaugh’s teams are just 1-5 at home against MSU and Ohio State in his six seasons with the program.

Saturday’s loss prompted Michigan fans to start calling for Jim Harbaugh’s job on social media shortly after the clock struck zero. SEC Network host Paul Finebaum was back to his old antics on Sunday, saying Harbaugh is one of the “most overrated” coaches in college football.

What were some of the other reactions from Saturday’s loss? Let’s take a look:

Michigan’s loss has resulted in a drop in a lot of rankings. Saturday Tradition’s Jim Tomlin has the Wolverines at No. 7 in the B1G Power Rankings, and Harbaugh’s crew fell from No. 13 to No. 23 in the latest Associated Press Poll. Perhaps more significantly, though, Michigan appears to have dropped out of the B1G East race. It makes you wonder if the Wolverines will ever work their way back in with Harbaugh in charge.

Another week, another offensive explosion in college football. Heck, Alabama WR DeVonta Smith tried to get a season’s worth of yards and touchdowns in his 203-yard, 4-touchdown performance against Mississippi State. Elsewhere, Justin Fields continued to be nearly perfect for Ohio State and there were some other big-time stat performances across the board.

So, who leads the FBS level in some key statistical categories? Here are your leaders in nine important stats as things stand entering November (via CFBStats.com):

Who will dominate on the field this weekend and climb up the leaderboards? One thing is for sure — we’ll see more big numbers across the country this weekend once again. Oh, and maybe someone will finally snag a fourth interception, perhaps?

BRAWL AT THE SWAMP

Florida and Mizzou engaged in an ugly brawl at halftime of Saturday’s game. What penalties will be handed out? 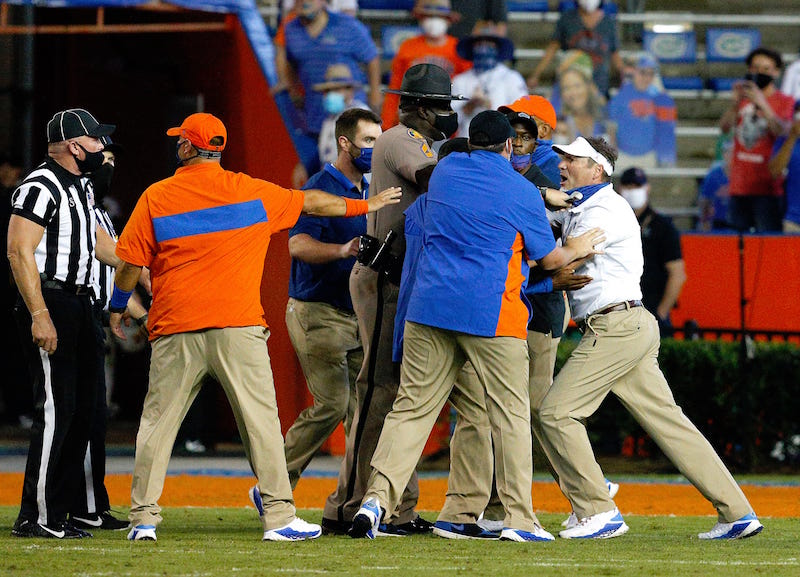 Before the teams could head to the locker rooms for halftime of the Mizzou-Florida game on Saturday, a brawl broke out. Punches were thrown at players wearing helmets, coaches (including Florida’s Dan Mullen) were yelling and being held back, and ejections and penalties were handed out.

This is certainly something the SEC league office will be looking at, and suspensions for each team’s next game (vs. Georgia in Jacksonville on Nov. 7 for Florida and vs. Georgia on Nov. 14 for Mizzou) could be coming. So, what happened in Gainesville on Saturday night?

Now we wait. The SEC office will certainly be reviewing everything from the incident, and fines and suspensions could be announced today. Since Georgia is the next opponent for both Mizzou and Florida, the Bulldogs could stand to benefit handsomely from any additional discipline. Stay tuned, because this story isn’t over yet!

You’re going to be hearing a lot about Florida, Texas and Pennsylvania tomorrow, thanks to the election. We’ll stay out of politics here in this newsletter, but for today’s quiz, let’s see if you can name all the FBS programs in those states. There are a total of 22 FBS schools in those states. Here’s how they’re broken down:

The great uniform combinations continue this season. Who wore it best over the weekend? 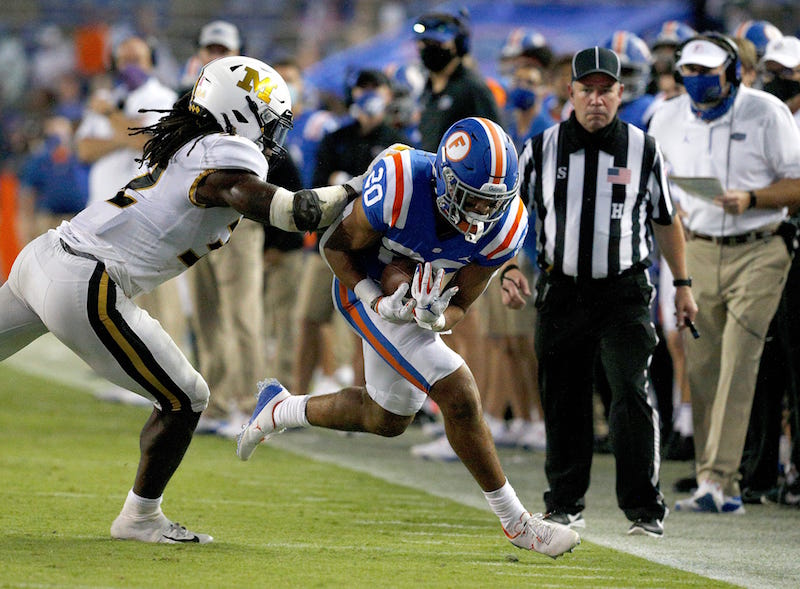 This past weekend’s games were played on Halloween, and let’s just say there were a few teams that got into the holiday spirit. We saw some great uniform combinations, including some special looks and throwback helmets. It was a great week for fans of new uniforms.

So, which teams wore it best over the weekend? Let’s break down some of the best combinations we saw from this week’s FBS action:

We’ve got some big-time games coming up next week and beyond. Rivalries can sometimes lead to impressive uniform combinations. Which teams will bring their “A” games both to the field and to the equipment room this week? Tune in next Monday for some more uniform talk!

– LSU coach Ed Orgeron seemed to indicate DC Bo Pelini’s job will be safe until at least the end of the 2020 season. Fans were calling for him to be fired after Saturday’s 48-11 loss at Auburn.

It has been a good start to the football season in Indiana. Notre Dame is 6-0 in the ACC, while Indiana and Purdue are both pleasant 2-0 surprises in the Big Ten. It’ll be tough for the state to improve to 14-0 next week, though. Ball State returns to action in the MAC against Miami (Ohio), Notre Dame faces undefeated Clemson, Indiana hosts Michigan and Purdue travels to Wisconsin.