Good morning and happy Friday the 13th! It hasn’t been a great week in terms of college football games being canceled and postponed due to COVID-19, but there are still a number of high-profile matchups across the country on track to be played tonight and tomorrow.

In today’s newsletter, we’ll discuss the SEC’s awful week, as the conference has been hit hardest by COVID. Then, we’ll talk about the resurgent Indiana program under coach Tom Allen. Finally, we’ll put a few ranked squads on upset alert. Without further ado, let’s get started with today’s newsletter!

The SEC has lost four games to COVID-19 concerns this week. Will the league be able to make up all the games? 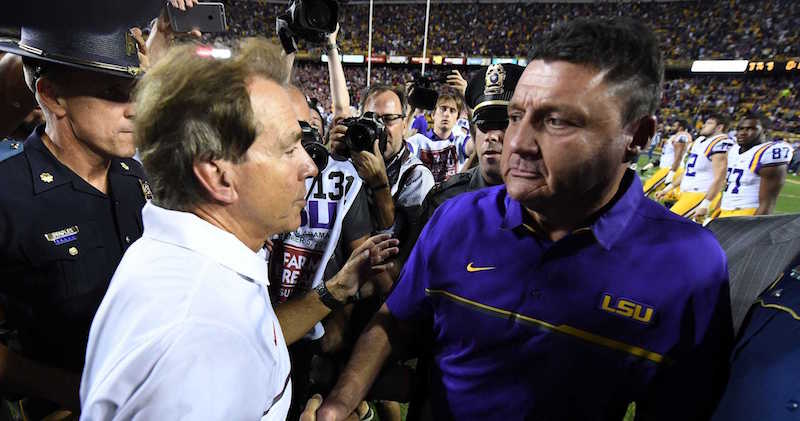 The SEC currently has five teams ranked in the AP Poll. On Saturday, only one of those squads will actually take the field — No. 6 Florida. That’s because the SEC has lost four games this week to COVID-19 concerns. Alabama-LSU, Texas A&M-Tennessee, Georgia-Mizzou and Auburn-Mississippi State have all been postponed. There are concerns about making up those games, too, as some of the teams involved already have games scheduled for Dec. 12, which was supposed to be the flex week to play postponed matchups.

So, how is the SEC handling this no-good, very-awful week? Let’s take a look at what’s being said about this rough week down south:

College football isn’t the only area of life where the virus continues to make headlines. Cases are on the rise across the country. If the season is going to reach the finish line, flexibility will be important. Crazy ideas might be needed. Heck, Ohio State’s punter even tweeted at Alabama joking about potentially playing each other this week (since the Buckeyes and Tide had their games postponed due to outbreaks at Maryland and LSU, respectively). While that game won’t happen (at least until the Playoff, perhaps), we could see some big schedule changes coming in the next few days. Stay tuned!

As mentioned in the previous section, the SEC has been hit hard by games being postponed due to COVID-19. No. 3 Ohio State’s game against Maryland has also been canceled. But, that doesn’t mean the college football slate is empty this weekend. There are still some intriguing matchups scheduled to take place.

So, which teams are expected to win the big games remaining on the schedule? Here are some of the lines for this weekend’s important matchups (via the DraftKings Sportsbook):

Will we see some carnage in the rankings this week? Or, will the big favorites continue to win? We’ll put a few ranked teams on upset alert later in today’s newsletter.

Indiana has been one of the biggest surprises of the season. How long can the Hoosiers keep winning? 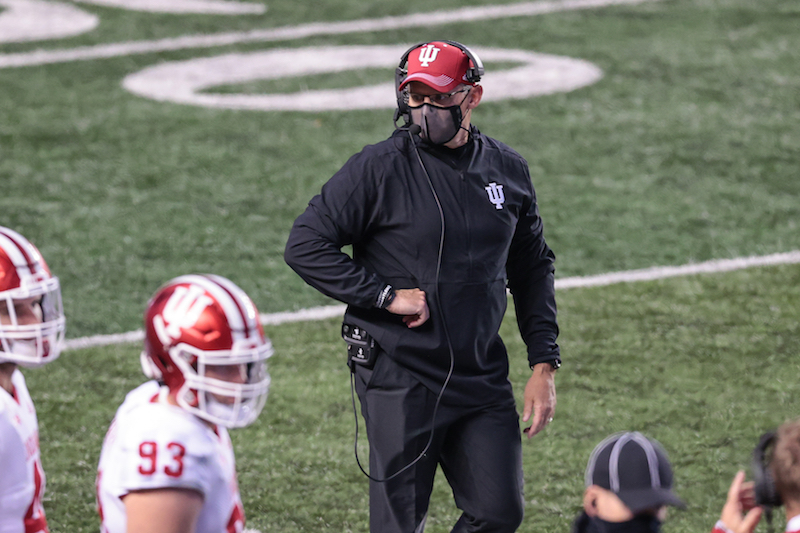 Many consider 0-3 Penn State to be one of the biggest surprises/disappointments of the 2020 season thus far. On the other end of that spectrum is 3-0 Indiana. The Hoosiers have been magnificent under coach Tom Allen, who is in his fourth full season as the team’s head coach. So far, the Hoosiers have beaten Penn State, Rutgers and Michigan in exciting fashion.

So, how real is this Indiana team? Can the Hoosiers continue to rack up wins? Here’s what is being said about Indiana as the Hoosiers prepare for this week’s game at Michigan State:

FOX’s Tim Brando called Indiana one of the great stories of the year. It won’t be easy, but the Hoosiers have the potential to have a special season. This week’s game is important, but next weekend’s showdown at Ohio State also looms large. We’ll see how long the magic lasts in Bloomington.

With college basketball getting ready to start on Wednesday, Nov. 25, let’s combine football and basketball once again for today’s quiz. Can you name the schools from each Power 5 conference (ACC, Big 12, Big Ten, Pac-12 and SEC) with the most recent titles in men’s basketball and football? (Note: It doesn’t have to be the same school. Also, for football, we’re going with AP titles only.)

Even with all the postponements, there are some great games this week. Who is on upset alert? 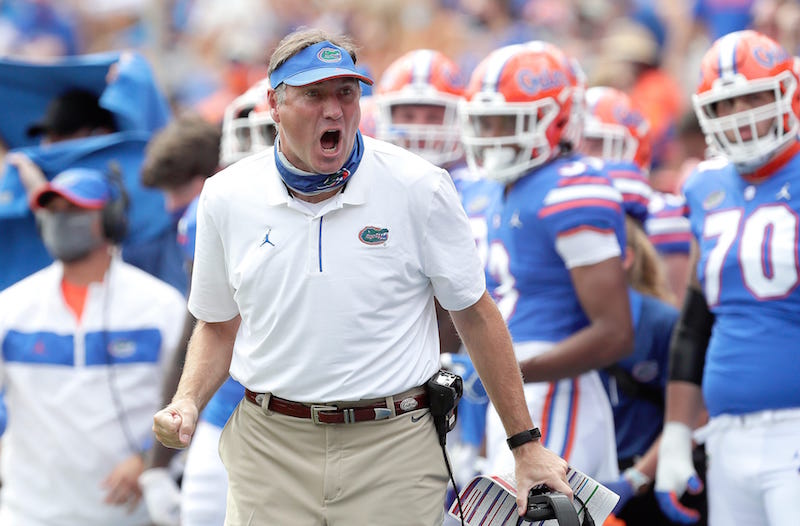 Yes, a number of big-time games have been canceled or postponed this week, but that doesn’t mean there won’t be excitement on Friday and Saturday nights. A number of top teams are in action, and even though there are no matchups of ranked squads, there are some potential upsets on the schedule.

So, which ranked teams are on upset alert heading into the weekend? Let’s take a look at four squads that could potentially go down to lesser foes on Saturday:

Every week thus far has featured crazy results and wild upsets. Even without some of the top teams in action this week, there are sure to be some surprises. How many of the teams mentioned above will lose on Saturday? We’ll find out soon enough!

The schools from each Power 5 conference with the most recent men’s basketball and football titles are:

“We are very excited to welcome ESPN’s College GameDay to Augusta National this Saturday. This will provide additional excitement for college football and golf fans alike. It affords us a unique opportunity to expose our sport to an audience that may be seeing the Masters for the very first time.

“And I have to say, I can’t wait to hear our friends on the College GameDay set recap the Florida Gators’ convincing win this last Saturday over the Georgia Bulldogs. I apologize to my Georgia friends, but I just had to say that.” 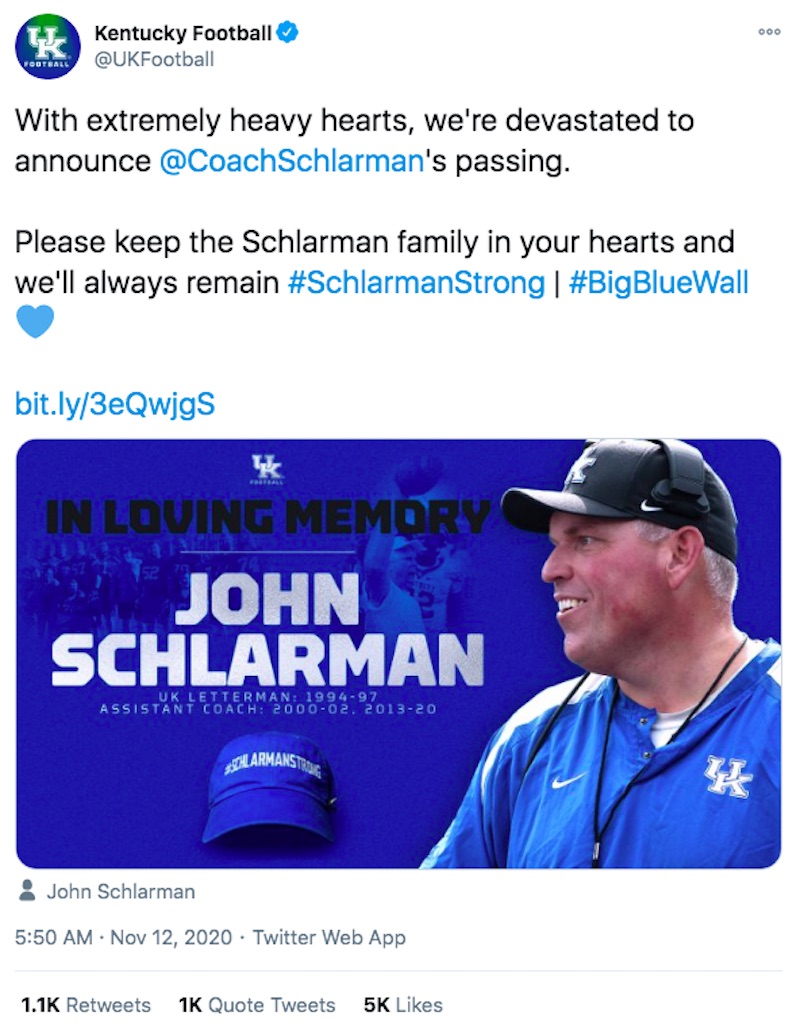 Kentucky announced the passing of OL coach John Schlarman at the age of 45 on Thursday. Tributes quickly poured in on social media. It’s clear he made a major impact on his players and the Kentucky program. Our thoughts go out to the Kentucky and Schlarman families.