Good morning and happy Monday! The season is starting to hit its stretch run as we approach Thanksgiving. That also means rivalry games are going to be coming in a matter of weeks. But, for now, we still have a number of teams that have yet to reach the halfway points of their seasons. The football action continues!

In today’s newsletter, we’ll discuss South Carolina firing Will Muschamp, a pair of surprising Big Ten division leaders and some of the best uniforms we saw over the weekend. Let’s get started then, shall we?

Will Muschamp is out at South Carolina. What led to this decision and where do the Gamecocks turn next? 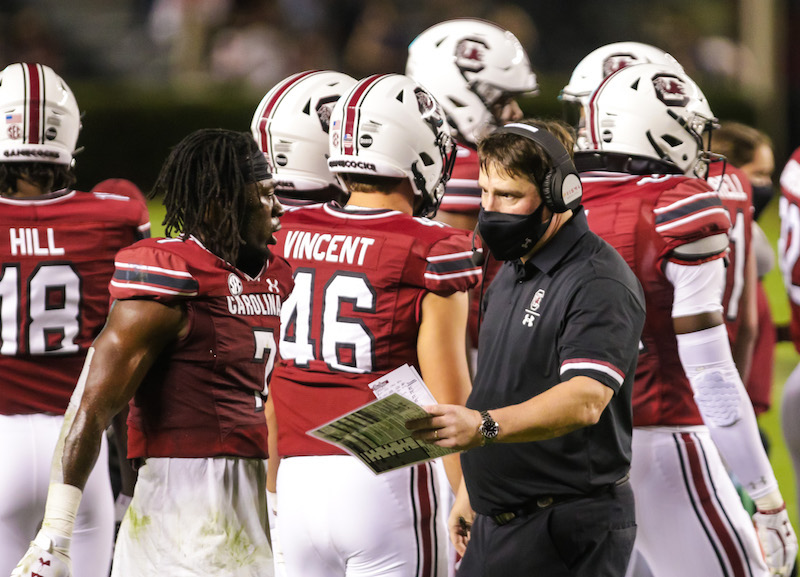 Sunday night saw some big news take place in the SEC. South Carolina and coach Will Muschamp have officially parted ways. After a 2-5 start to the season, the Gamecocks decided to bite the bullet on Muschamp’s big buyout and move on from the embattled coach. OC Mike Bobo will serve as the interim coach for the rest of the 2020 season.

So, what led to this decision on Sunday night? And, where do the Gamecocks go from here? Let’s take a look at this huge story out of the SEC East:

What’s Will Muschamp’s next job? Well, many folks on Twitter joked that he will be the next defensive analyst to make his way through Nick Saban’s coach image rehabilitation center at Alabama. A number of former head coaches have worked under Saban and gone on to land bigger jobs after a couple of years. Muschamp has already worked under Saban during their time at LSU, so it’s not that crazy of an idea. We’ll see what happens next, both with Muschamp and with the Gamecocks’ search.

The offensive numbers being put up across college football this year continue to be staggering. Florida QB Kyle Trask may have taken over as the frontrunner for the Heisman Trophy with a 6-touchdown effort against Arkansas on Saturday night. But, there have also been some outstanding defensive performances in 2020.

So, who leads the nation in some key statistical categories? Here are the current FBS leaders in 9 categories, from passing yards to interceptions (via CFBStats.com):

The Power 5 teams are starting to catch up with the Group of 5 teams in terms of games played, so we’re seeing more Power 5 athletes lead in these categories. Will that continue next week? Tune in next Monday to see how things look nationally.

There are unusual names atop the B1G division races. How good are Indiana and Northwestern after both starting 4-0? 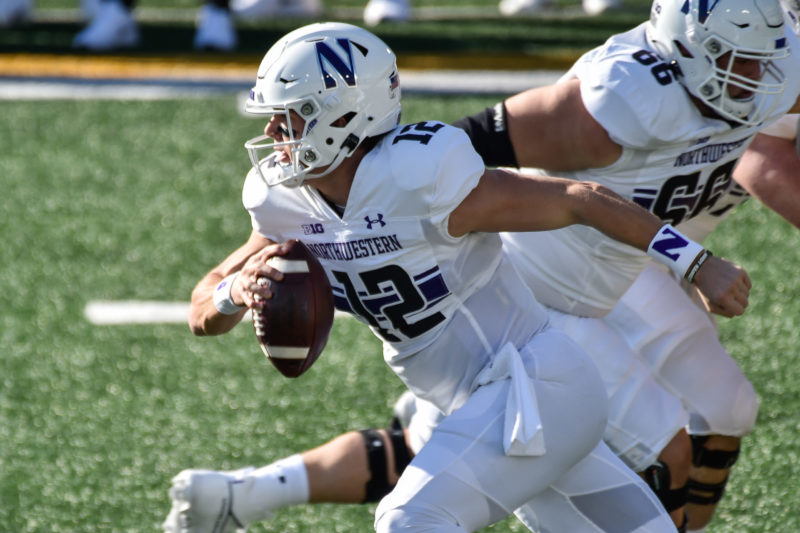 It took four weeks, but there are clear leaders atop both the East and West divisions in the B1G in 2020. The names? Indiana and Northwestern. Those aren’t the programs you’d typically find in the No. 1 spots, but both are the only 4-0 teams in their respective divisions.

Sure, they’ve gotten some help. Ohio State’s game against Maryland was canceled due to COVID-19 concerns from within the Terrapins’ program, putting them a game behind the Hoosiers. Wisconsin missed two games (Nebraska and Purdue) with outbreak issues, as well. Let’s not ignore the 4-0 starts, though. Regardless of circumstances, that’s really impressive in 2020.

If the season ended today, Indiana and Northwestern would meet in Indianapolis for the B1G Championship Game. Can both teams continue down this path of victory? They both looked good in Week 4:

Regardless of how it all plays out, Indiana and Northwestern have been pleasant surprises in the B1G. And, both are certainly two of the best teams in the conference. If both continue to play this well, it could result in a Champions Week matchup, which would probably be an ideal way to close the season for Wildcats QB Peyton Ramsey, who transferred after three seasons at Indiana.

All 10 FBS conferences have now begun their 2020 football seasons, but not every team has picked up its first win as of this week. In fact, there are currently seven FBS squads that have played at least three games and have yet to win. For today’s quiz, can you name those seven winless squads? Bonus point if you can also name the school with the most losses of that bunch.

Even with all the postponements, there were plenty of great uniform combos this week. Who wore it best? 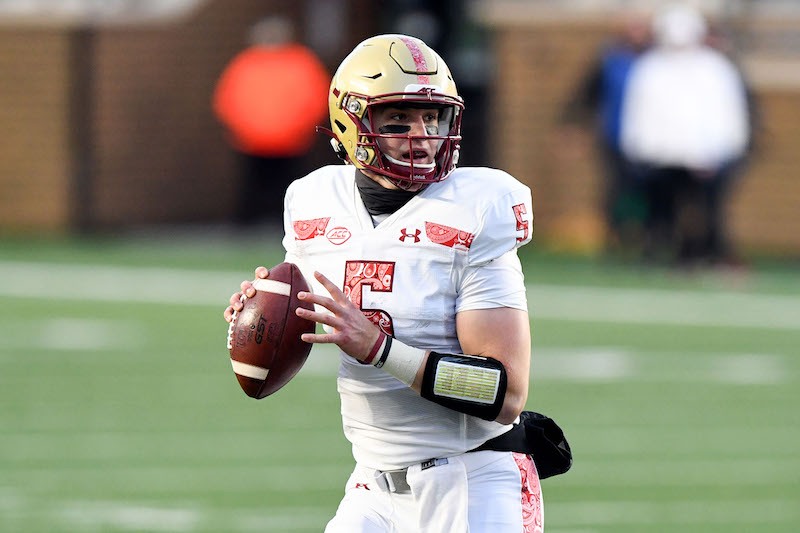 Yes, we had a ton of games either postponed or canceled this past week due to the COVID-19 pandemic, but there was still plenty of college football action to be seen on Saturday. And, that meant many schools brought out their best when it came to uniforms.

From Boston College to Marshall to Kentucky, it was a great week for paying tribute. So, let’s take a look at some of the best combinations of the busy weekend:

As we’ve seen often this year, this past week was a great one for uniforms. As we head down the stretch, the games will get more important. That means we should be seeing a continued run of unique and incredible uniform combinations. Check back next Monday to see who wore it best this coming week!

The seven FBS schools that have played at least three games and have yet to record their first victories are:

“This was once a coach that was respected, and now, sadly, Jim Harbaugh has become a punchline in college football. It’s almost impossible to watch this guy. He makes $8 million per year. He was the talk of the sport a couple of years ago. Now, no one really knows what the future looks like. It looks pretty grim if Michigan decides to fire him. A lot of people up there are saying, ‘We want to keep him.’ For what reason? I have no idea.” 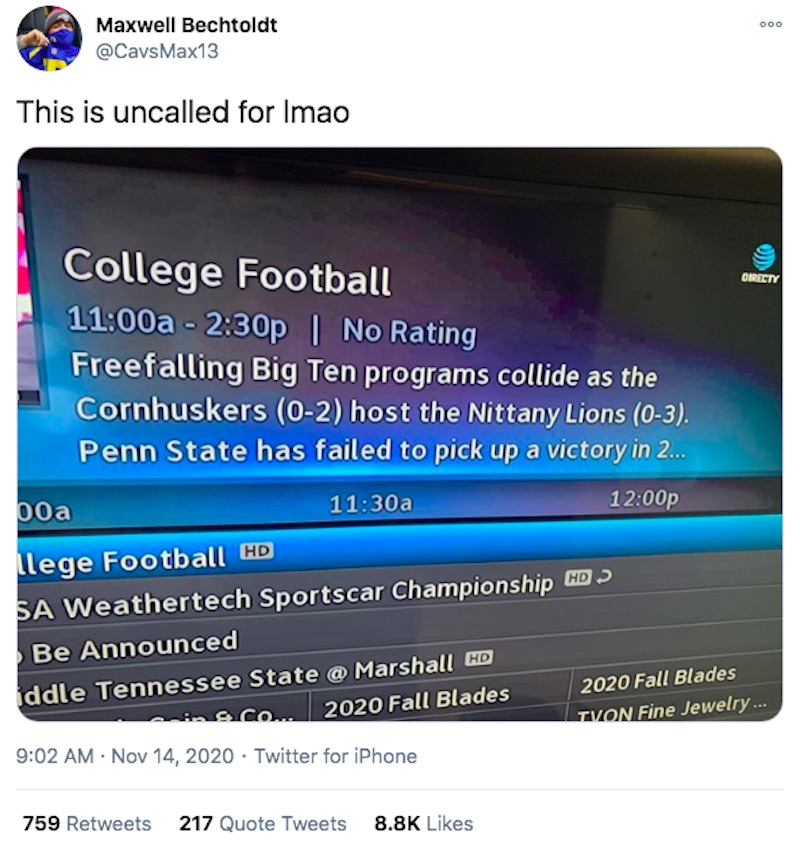 Even the DirecTV guide had trouble drumming up excitement for Saturday’s matchup between winless Nebraska and Penn State squads. Nebraska managed to hold on for an ugly 30-23 win. Better to win ugly than lose ugly, though!